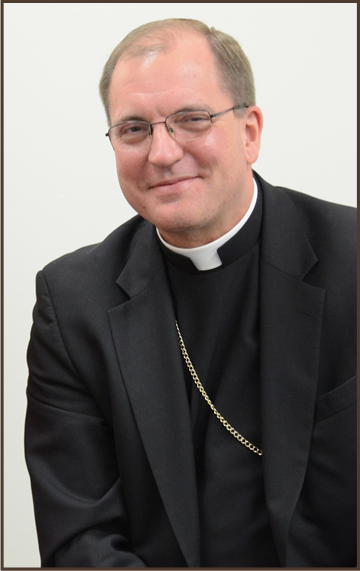 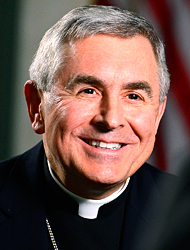 Bishop Ronald Gainer was appointed Bishop of Harrisburg by his Holiness Pope Francis and was installed on March 19, 2014.
Born in Pottsville, he completed studies at St. Charles Borromeo Seminary in Philadelphia, earning a Master of Divinity degree, summa cum laude and he was ordained a priest for the Diocese of Allentown on May 19, 1973. Bishop Gainer earned a licentiate degree in Canon Law and a diploma in Latin Letter from the Pontifical Gregorian University in Rome in 1986.
For much of his priesthood, Bishop Gainer served in parish, campus ministry, marriage and family, and tribunal positions. As Secretary of Catholic Life and Evangelization for the Diocese of Allentown he supervised 14 diocesan offices and the promotion of the works of spiritual renewal and evangelization. He was consecrated and installed as Bishop of Lexington, KY on February 22, 2003.
Bishop Gainer currently serves as President of the Pennsylvania Catholic Conference. On the national level, Bishop Gainer is a member of the United States Conference of Catholic Bishops (USCCB) where he serves as a regional representative to the USCCB Committee for the Protection of Children and Young People, and liaison with the North American Forum on the Catechumenate. He is also on the Board of Directors of: Saint Charles Borromeo Seminary, Cross Catholic Outreach and Holy Family Radio. 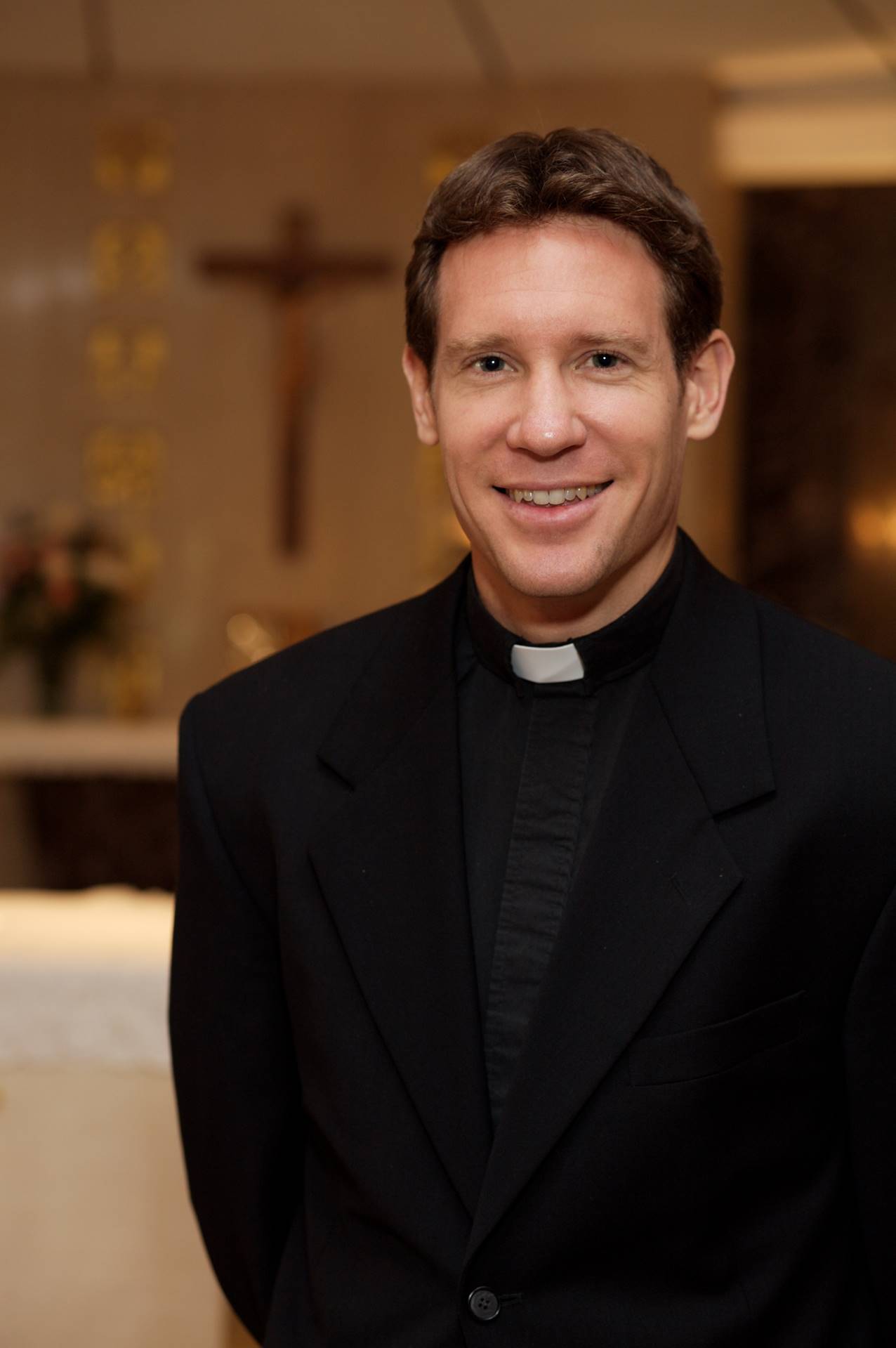 Father Michael Gaitley, MIC is a member of the Congregation of Marian Fathers of the Immaculate Conception. He was born in Los Angeles. Father Michael holds a Masters Degree in Theology from St. John Seminary in Massachusetts, and a Licentiate Degree in Spiritual Theology from the Dominican House of Studies in Washington, D.C.. Father was ordained to the priesthood Saturday, October 16, 2010. After his ordination to the priesthood, Fr. Michael succeeded Fr. Seraphim Michalenko, MIC, as the director of the Association of Marian Helpers, a spiritual benefit society with more than 1,000,000 members. As director, he has launched a new pastoral initiative called Hearts Afire: Parish-based Programs for the New Evangelization (HAPP). He is also the author of the best-selling Marian Press books, Consoling the Heart of Jesus, 33 Days to Morning Glory, The 'One Thing Is Three, You Did It To Me, The Second Greatest Story Ever Told, Divine Mercy Image Explained, and Divine Mercy Explained.
He frequently appears on EWTN and preaches retreats throughout the country on topics such as Divine Mercy, Consoling Spirituality, and Marian Consecration. When he is not preaching missions and retreats, Fr. Michael lives and works on Eden Hill in Stockbridge, Mass., home of the National Shrine of The Divine Mercy. 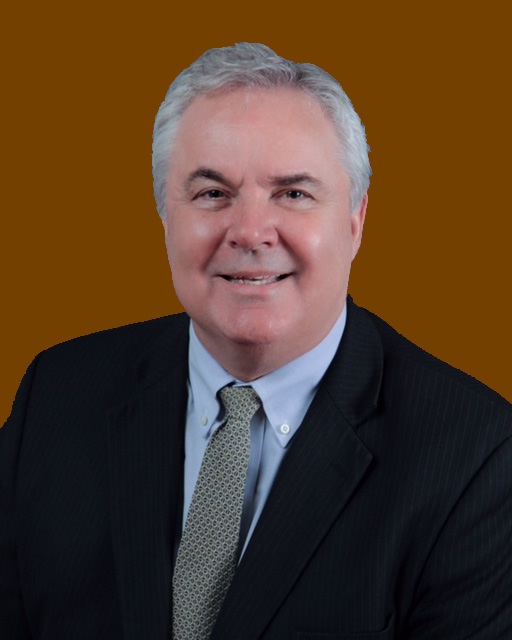 Marcus Grodi is a native of Ohio, Marcus Grodi received his BS degree from Case Institute of Technology in Polymer Engineering and worked for six years as an engineer. During this time, he was involved in a variety of Protestant ministries. He then received his Master of Divinity Degree from Gordon-Conwell Theological Seminary and was ordained to Protestant pastoral ministry.
During more than fifteen years of youth, young adult, and pastoral ministry, his main emphasis was church and lay spiritual renewal. Marcus, his wife Marilyn, and their two older sons, JonMarc and Peter, were received into the Catholic Church on December 20, 1992. Their third son, Richard, entered through baptism.
Marcus now serves as the Founder/President of The Coming Home Network International, a non-profit, Catholic, lay apostolate aimed at helping Christians, explore the Catholic Church. He also hosts The Journey Home, a weekly live television program, and Deep In Scripture, a radio program, both on EWTN.
He is the author of Thoughts for the Journey Home, What Must I Do to Be Saved?, novels How Firm a Foundation and Pillar and Bulwark, and the editor/author of Journeys Home and Journeys Home II. He has taught courses in catechetics, youth ministry, leadership, and theology at Franciscan University of Steubenville and the Pontifical College Josephinum. He has written regular articles for several Catholic publications. 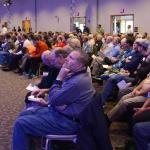 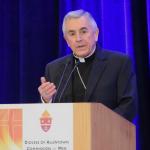 Bishop of Harrisburg Ronald Gainer, formerly a priest for the Diocese of Allentown, discusses being men of faith who have encountered Jesus Christ. 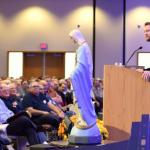 Fr. Michael Gaitley, a member of the Congregation of the Marian Fathers of the Immaculate Conception, talks about Our Lady of Guadalupe and Our lady of Fatima beside a statue of the Blessed Mother. 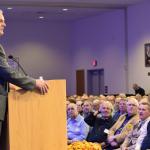 Marcus Grodi, author, speaker and president of the Coming Home Network and host of the EWTN "Journey home" television program, presents the afternoon keynote address at the conference. 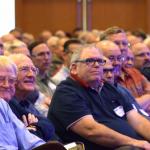 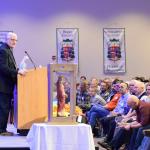 Deacon Anthony Campanell, assigned to St. Joseph the Worker, Orefield, talks about the diocesan Commission for Men and the Catholic Men's Fellowship groups. 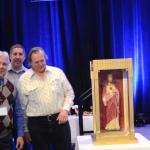 Deacon Campanell, right, awards a statue of the Sacred Heart of Jesus to men from St. Benedict, Mohnton for having the highest attendance percentage. 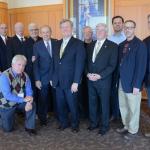 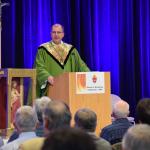 Bishop of Allentown John Barres delivers the homily at the Vigil Mass to conclude the conference. 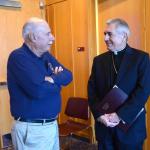 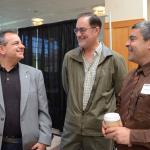 Enjoying a conversation at the conference are, from left: Deacon Bruno Schetini, assigned to St. Joseph the Worker, Orefield; Joseph Galassi; and Delphy DeFalcis. 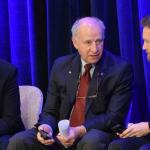 Father Michael Gaitley, right, is welcomed to the conference by Deacon Anthony Cmpanell, left, and Michael Barski, chairperson of the diocesan Commission for Men and parishioner of St. Thomas More, Allentown. 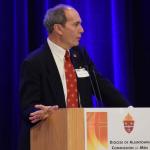