As the Year of St. Joseph Draws to Close, We Reflect on the Dignity of Work 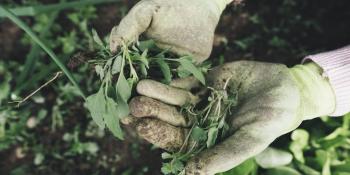 As the Year of St. Joseph draws to a close, it is fitting to reflect on the life of the foster-father of Jesus, as well as on the dignity found in human work.

When the Word of God became incarnate, He chose to place himself in the care of a carpenter from Nazareth, under whom He worked and was apprenticed for 30 years. Jesus shared a quiet, simple life of labor with St. Joseph prior to the start of His public ministry, and in imitation of our Lord, it is appropriate that the Church places work under the patronage of St. Joseph.

The Dignity of Work is one of seven themes of Catholic Social Teaching, and its importance points back to the beginning of humanity. In the creation narrative, Adam and Eve experienced life with no suffering or sorrow prior to the Fall. However, they still worked. “The Lord God took the man and put him in the garden of Eden to work it and keep it,” (Gen. 2:15).

The first sin introduced suffering into the human experience, and as a result, work is sometimes found to be toilsome. Work itself is not a punishment. However, work that is burdensome and that empties us rather than fulfilling us points to the disorder that entered the world following the sin of Adam and Eve.

While work is often accompanied by challenges that were not part of God’s original plan, it still holds inherent dignity. “Work is a good thing for man – a good thing for his humanity,” St. John Paul II writes in his 1981 encyclical Laborem Exercens. “Because through work man not only transforms nature, adapting it to his own needs, but he also achieves fulfillment as a human being and, indeed, in a sense, becomes ‘more a human being.’”

It is important to understand the distinction between the Church’s view of work and that of secular culture, in that the value of work is grounded in the inherent dignity of the human person, not vice versa. Work honors the gifts and talents received by humanity from God, and can also serve as a channel of grace and sanctification (CCC 2427.) Our value as persons is not derived from our work – rather, we bring dignity to our tasks because of our identity as sons and daughters of God.

Additionally, the demands of the workplace should never contradict the dignity of the human person. As Pope Leo XIII notes in his 1891 encyclical Rerum Novarum, “No man may with impunity outrage that human dignity which God Himself treats with great reverence.”

At a time when many establishments are struggling to find staff members to keep their businesses operational, it is important to remember that all are called to participate in the variety of roles that contribute to the good of society. This reaches far beyond the type of work that results in a paycheck.

Whether a person is teaching a class, raising children at home, engaging in manual labor, running a business, serving meals, caring for the sick, creating art, or performing any other role that honors God and benefits humanity, they are participating in meaningful work.

With the Year of St. Joseph set to end on December 8th, the Diocese will feature a series of stories from people around the Diocese about the meaning they find in their work. Be sure to watch for these articles on diocesan social media and on the diocesan website.