Theology on Tap calls for young adults to be ‘intentional prophets’ 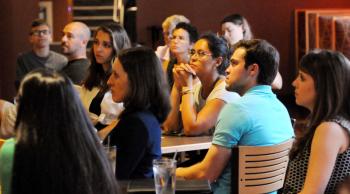 “People watch you even when you don’t say a word. Why not be an ‘intentional prophet’? You have been anointed for that role through baptism. Use that power within you,” said Deacon Hugh Carlin, July 17 during Theology on Tap (TOT) at Allentown Brew Works.

Deacon Carlin, a former anesthesiologist at St. Luke Hospital, Bethlehem and assigned to Sacred Heart, Bath, presented “Faith on the Job: Maintaining Values in the Workplace” as part of TOT.

He opened his talking wearing his physician lab coat and told the young adults that God was intimate with each one of them before they were born and assured them that he has a plan for them.

“We all have a vocation. God is intimately involved with what you are doing in the world,” said Deacon Carlin.

While in medical school, he admitted that he wasn’t fully informed on the church’s position in the medical field and said he struggled about what the world expected from him.

When he began his career at St. Luke, he made it a point to say hello to each and every person he passed on the bridge from the parking garage to the hospital.

“I received many interesting reactions. I definitely encourage you to try it some time,” said Deacon Carlin.

As he walked through the hospital during his shift, Deacon Carlin said, he noticed many “invisible” people who no one spoke with.

“That is wrong. All of us are to treat people as if they are people. Anyone who is baptized was anointed with chrism and is united with Jesus Christ in the common priesthood of people,” he stressed.

As an anesthesiologist, Deacon Carlin said, his lab coat signaled people of his role of service and occasionally signaled distrust to others. After being ordained to the diaconate, he began wearing a small cross pin on his lab coat and scrubs.

“I don’t know how many people noticed it but I hope they saw what was expected of me. I was also functioning as a prophet,” he said.

Even though Deacon Carlin has never heard God’s direct voice speaking to him like biblical prophets, he said the cross is a reminder of who he is as he assists at Mass, distributes Communion at nursing homes and completes his daily tasks like grocery shopping.

“It’s a reminder of who and what I am. I ask all of you to consider being preachers – not at the podium necessarily. Be intentional and know what it is that you are saying and doing,” he said.

As a medical student, Deacon Carlin said, he was largely moved and inspired by professors that refrained from long lectures in favor of sharing stories of their life experiences.

“I was and still am formed by how people act. People affect me every day. Everyone who walks with you is affected by you. The way you behave, treat fellow students and co-workers and unseen people is how you communicate who you are,” he said.

In addition, he told the young adults that they won’t be called to just “one thing” in their lifetime.

“You are going to be called to probably many things. Life is never static,” said Deacon Carlin.

Throughout his lifetime, he said, he was called to be a doctor, a father, a husband, a friend, a neighbor and a deacon.

“All these roles co-exist. Each time we interact with others we reveal if we are a good friend, mother, father, supervisor, co-worker, employee or whatever roles we have in this life,” said Deacon Carlin.

“At the core you should act as a child of God. He loves you and will never turn his back on you.”

The young adults’ roles as prophets, according to Deacon Carlin, does not require them to be theologians either.

“If you have grace in your heart, act as a child of God and understand everyone else is a beloved child of God – you will be OK,” he said.

And when they face persons who dislike them or who aren’t interested in their values – Deacon Carlin advised the young adults to not be discouraged.

“Some people will walk away from you and some want to sit down for an honest discussion. If someone is not ready for discussion – then it’s not the right time,” he said.

“You don’t have to save them all. You just have to feed them. Give them an example of what Catholic living is like.”

Next in the series

The remaining talk in the series “Faith on the Job: Maintaining Values in the Workplace” will be Monday, Aug. 21 at 7 p.m. at Allentown Brew Works.

Theology on Tap is a monthly series sponsored by the diocesan Office of Youth, Young Adult and Family Ministry (OYYAFM). The series is designed to welcome all young adults, single or married, together in a casual setting where they can grow in the faith and share community with one another.

There is no cost to register or attend. For more information, click here. 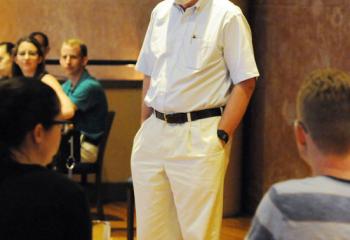 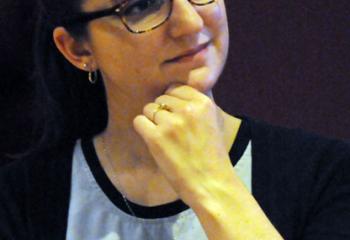 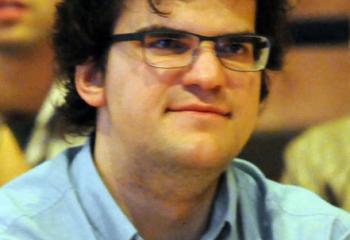 Nick Gidosh listens to ways to become an “intentional prophet.” 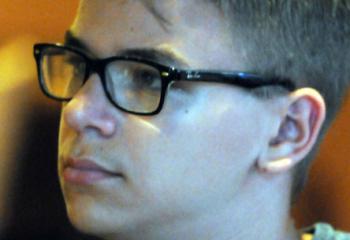 William Schulz participates in the discussion.