‘Responding to Relativism’ Focus of Theology on Tap Session 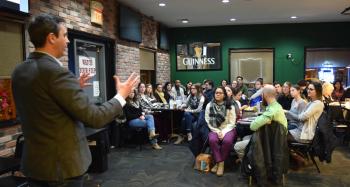 A group of more than 40 young adults gather for the Theology on Tap session “Responding to Relativism” Jan. 14 at Hops at the Paddock, Allentown. (Photos by John Simitz)

“Very few people are moral relativists – most are confused,” Dr. Michael Rombeiro told the 40 young adults gathered for the Theology on Tap session “Responding to Relativism” Jan. 14 at Hops at the Paddock, Allentown.

In a culture that reflects universal truth in favor of convenience, how can Catholics respond charitably yet effectively to relativism? Rombeiro discussed the confusion that stems from relativistic thinking in society, the importance of moral absolutes and the role of Catholics who strive to follow Church teaching.

“Moral relativism is the idea that there is no absolute moral law,” Rombeiro said. There’s no absolute truth, only truths to a particular culture or individual. “What’s moral in one culture may not be in another, and individuals have their own personal morality or value system.”

“Morals are relative but that’s not moral relativism,” Rombeiro said. “General moral principles are absolute.”
Rombeiro noted St. Thomas Aquinas said the three aspects of a moral act are the act itself, intention and circumstances. “The subject’s intentions and relative circumstances do matter,” Rombeiro said.

“In moral relativism, all value judgements are about the subject and not the object,” he said. For example, if you see a robbery, you think it’s bad, but if you are the robber, you think it’s good.

“For most people who promote moral relativism it has to do with tolerance,” Rombeiro said, noting Catholics, Jews and Muslims are a problem to them because these faiths “have absolute values.”

Even those who espouse moral relativism agree, for instance, that murder is wrong. “It’s really about them trying to replace traditional objective values with progressive values.”

“In real hardline radical relativism, there really is no good or bad, right or wrong. You decide,” Rombeiro said.

"This idea does influence a lot of ways of thinking these days, like it’s up to you to decide the meaning of life, and the source of value of things is the subject – there’s nothing objective about it.”

“Traditionally, we have an intellect that can get past appearances and grasp reality. In moral relativism, you say if I can’t see human nature, I can’t know it, maybe it doesn’t exist,” Rombeiro said, adding the groundwork for moral relativism was laid out in the 1880s.

“It’s basically secular humanism,” he said, which is humanism, with regard in particular to the belief that humanity is capable of morality and self-fulfillment without belief in God.

He said most illegal acts are clearly morally wrong, such as murder and robbery. On the other hand, some legal acts are immoral, ambiguous or moral.

“People are confused because they say their values are relative, but they don’t really believe it – if you point it out, they’ll say yes, there are objective values,” Rombeiro said.

“At heart, we have different values. We’re living in a culture with no guideposts, that’s part of the problem.”
“If someone sees you living a fulfilled life of integrity, they will want to know what that’s about,” Rombeiro said.
“There’s a big difference between religion and being a moral person.”

The next Theology on Tap, “Why Stay in the Church?” presented by Deacon Tony Belitto of St. Stanislaus, Lansdale, is slated for Monday, Feb. 11 at 7 p.m. at Hops at the Paddock.

Theology on Tap events are free of charge. Food and beverage can be ordered from the menu at the event site. For more information, click here or email Smith at asmith@allentowndiocese.org. 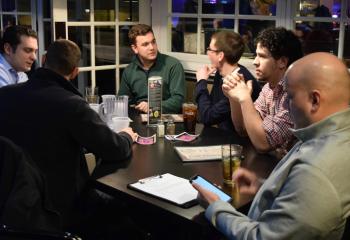 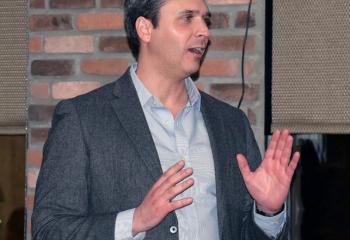 “If someone sees you living a fulfilled life of integrity, they will want to know what that’s about,” Dr. Michael Rombeiro tells young adults. 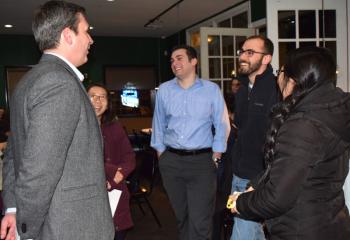