‘Protecting the Pope’ Focus of Theology on Tap Session 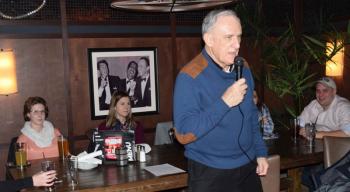 Father Frederick Riegler presents “Protecting the Pope: What We Knew Then, What We Know Now” at Theology on Tap Feb. 12. Among those attending are, from left, Jen McHugh, Erin Miller, Helen Smith and Brett Kita. (Photos by John Simitz)

Father Frederick Riegler presented “Protecting the Pope: What We Knew Then, What We Know Now” as featured speaker of Theology on Tap Feb. 12 at Bar Louie in the Promenade Shops, Center Valley.

While St. Pope John Paul II was loved and adored by many during his papacy, there are always dangers associated with being a public figure. Father Riegler spoke about his experience assisting the Secret Service in their protection of now St.

Pope John Paul II during his 1979 visit to Philadelphia.

Father Riegler’s testimony touched on the 1981 assassination attempt and what we know now about the parties who threatened the safety of St. Pope John Paul II during his papacy.

The Diocesan Office of Youth, Young Adult and Family Ministry (OYYAFM) sponsored the evening, which wrapped up with a question-and-answer session.

Theology on Tap is a monthly series sponsored by OYYAFM. The series is designed to welcome young adults ages 21-35, single or married, together in a casual setting where they can grow in the faith and share community with one another. It originated in the Archdiocese of Chicago, Illinois.

Then on the faculty of St. Charles Borromeo Seminary, Philadelphia, Father Riegler was given the task of helping the Secret Service with arrangements when St. Pope John Paul II visited the seminary during his 1979 visit to the city.

“I met with the head of the Secret Service in the Philadelphia area,” Father Riegler said, noting the arrangements centered on securing the seminary building and securing the people there so the Secret Service would know precisely who would be there when the pontiff came to speak in the chapel after celebrating Mass on the Benjamin Franklin Parkway.

The Secret Service’s focus on details showed Father Riegler just how thorough the agency was. They even had to make sure no one snuck onto the bus carrying seminarians from the Mass back to the seminary for the Pope’s visit.

“The day the Pope arrived at St. Charles the Secret Service had a sniper team in the bell tower … but they denied it to the press,” Father Riegler said. “I learned about the ‘deniability’ of the Secret Service in its job,” he said, explaining they made public only information that had to be known.

“The Mass on the Parkway was a wonderful experience. We even got a police escort back to St. Charles,” Father Riegler said.

St. Pope John Paul II was running late, and when he arrived at St. Charles spoke for about 20 minutes. “Because he was running late, the faculty members were not personally presented to him,” Father Riegler said. “My mother did shake his hand, and she didn’t wash it for three days.”

Though Father Riegler was not able to be presented to the Pope that day, he had previously met him when the future pontiff was Cardinal Karol Wojtyla and visited St. Charles.

Father Riegler recalled when the Pope came up South Broad Street in Philadelphia he rode in a car with an open roof, as this was before the popemobile.

Unbeknownst to the Secret Service, St. Agnes Hospital had a surprise planned, sending many balloons up in the air as the Pope approached. “The balloons made popping sounds. The Secret Service heard the noise, pulled the Pope down to the floor, and someone said, “Floor it” as the car went 60 miles per hour up Broad Street.

“The people wondered why the car was going so fast, but St. Agnes never told the Secret Service about the surprise,” Father Riegler said.

Fast forward to May 13, 1981, when Mehmet Ali Agca attempted to assassinate St. Pope John Paul II in Rome.
“I thought, we protected him here, but in Rome he almost gets killed. He didn’t have much protection in Rome, just a few Swiss Guards.”

Father Riegler at first believed Agca was a rogue assassin. “I thought he was a Muslim terrorist with a grudge, but then I learned he had worked for the Bulgarian KGB. Nothing was ever done by the KGB at that level without approval by the Presidium,” he said, referring to the Presidium of the Supreme Soviet of the Soviet Union.

“This was not the work of a rogue assassin. This was approved by the highest level of Soviet leadership,” he said, noting at that time it was Leonid Brezhnev and Yuri Andropov.

Why would they target the Pontiff? Because months before, Solidarity, the first non-communist union in Poland, was formed.

“The Soviets saw this as a threat … and saw John Paul II as a threat. It’s highly likely his assassination attempt was approved at the highest level.”

Father Riegler said the Soviet archives were open after the fall of communism, but were closed again under Vladimir Putin, a former KGB agent.

Father Riegler recalled the Polish government declared martial law to shut down Solidarity Dec. 13, 1981. Lech Walesa was the founder of Solidarity and later the first post-communist president of Poland.

When Solidarity was shut down, the only people who could work were the ones with jobs with Poland.
In 1982, enter Cardinal John Krol, then Archbishop of Philadelphia and a friend of the Pope’s, also of Polish descent; the future Cardinal John Foley, a “protégé” of Cardinal Krol, according to Father Riegler, and then editor of The Catholic Standard and Times; and Ed Piszek, the founder of Mrs. Paul’s Frozen Seafood and also of Polish heritage.

Father Riegler said the trio made a number of trips to Warsaw, flying first into Rome to pick up “diplomatic packets.”

Father Riegler said the CIA was transporting money to the Vatican, which was picked up by the Philadelphia trio in the “diplomatic packets” and taken into Poland. “The CIA transferred an estimated $50 million into Solidarity to help the movement,” he said.

He noted George H.W. Bush, the former head of the CIA, was vice president at the time. “It doesn’t take too much to connect the lines. And they did this right under the noses of the Polish KGB.”

“Lech Walsea always said the Church helped him, but so did the U.S. government.”

Discussing the relationship between President Ronald Reagan and St. Pope John Paul II, Father Riegler said, “Ronald Reagan was elected, in part, to talk tough with the Soviet Union, and he did. And he was very hard-nosed about it after the assassination attempt on his life,” he said, noting the March 30, 1981 assassination attempt by John Hinckley.

“John Paul started to contact Reagan, and told him, ‘You’re on the right track. We must resist communism,’” Father Riegler said. “Reagan didn’t need much encouragement.”

After the attempts on their lives, “Both knew they had limited time to do what they had to do, though there were huge risks for both,” Father Riegler said. “John Paul was willing to play ball with the American government.”

Together, the president and the Pope helped bring about the fall of communism.

“The KGB even had two priests in the Vatican who were KGB agents. They were caught after the Pope’s death.”
Theology on Tap events are free of charge. Food and beverage can be ordered from the menu at the event site. For more information, click here or email adoncsecz@allentowndiocese.org. 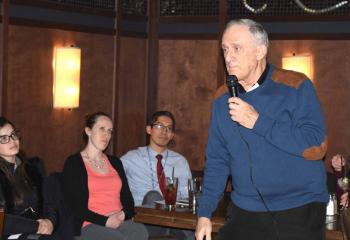 Among those listening to Father Frederick Riegler make a point are, from left, Francesca Frias, Thea Aclo and her husband Allan Aclo. 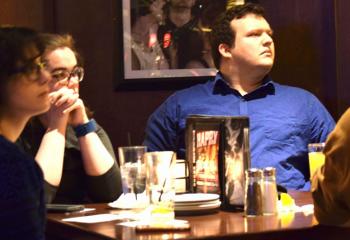 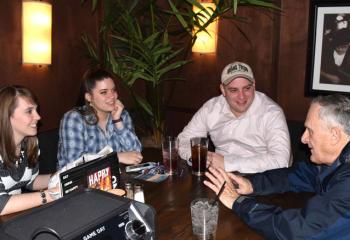