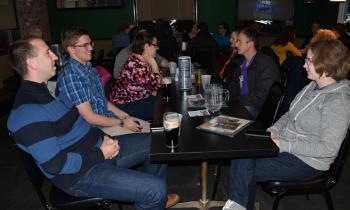 Young adults enjoy the evening of faith and fellowship sponsored by the Diocesan Office of Youth, Young Adult and Family Ministry. (Photos by John Simitz)

“Mary is our warrior Queen. We can go to her with anything and she will fight for us,” said Eva Gontis, presenting “Mary’s Toolbox: Keys to a Powerful Prayer Life” at a Theology on Tap session Nov. 12 at Hops at the Paddock, Allentown.

Gontis, of the Diocese of Harrisburg, discussed Mary’s toolbox of prayers and devotions, and practical ways young adults can take the next step toward a deeper faith.

The mother of eight is a stay-at-home mom, but has taught theology and English, attaining her master of arts degree in theology and Christian ministry from Franciscan University of Steubenville, Ohio.

Gontis addressed such topics as what makes the rosary so powerful? Why do some Catholics wear scapulars, and what do the different types mean? How can we use the many sacramentals and devotions available to us to enrich our faith and lead a stronger prayer life?

“I was always close to the Blessed Mother growing up. My Catholic faith always meant the world to me,” said Gontis.

Growing up in Southern California, Gontis attended Mass every Sunday and had a great church youth group as a teen. “There was still something missing that was uniquely Catholic in our youth group meetings,” Gontis said. “What did it mean to be Catholic? I didn’t know the doctrine of the Church.”

In her high school years in the 1980s, Gontis said she didn’t know why she believed what she believed. “I wasn’t questioning my faith but what it was I believed.” This led her to pursue a degree at Franciscan University, where she also met her husband.

Gontis suggested we need a “grace-o-meter” patterned after the meter Credit Karma shows on its television commercials, because grace is the most important thing.

“Why the Blessed Mother? Why not just go to Jesus?” Gontis asked. “If you know someone who can help you achieve your goal – in this case meeting Jesus and getting to heaven – wouldn’t you ask them for help?”

“Mary is the most pure vessel. The Angel Gabriel said, ‘Hail, full of grace.’ She’s the purest human that ever lived,” Gontis said, noting Jesus was both human and divine.

Gontis said at the Wedding at Cana, Mary beseeches Jesus on behalf of the host, and tells the host, “Do whatever he tells you.” Until that point, Jesus had not performed any public miracles.
“There is nothing too small that the Blessed Mother won’t intercede for us.”

Mary, Gontis said, is the gift Jesus gave us from the cross when he said, “Woman, behold your son,” and “John, behold your mother.”

Gontis said Mary is also the mother of the Church.

She encouraged everyone to pray novenas, and explained the word novena is a reminder of the nine days between the Ascension and Pentecost that Mary and the apostles spent waiting for the Holy Spirit to come.

“She’s the new Eve, the woman that crushes the head of the serpent,” Gontis said. “She’s the woman of Revelation, the Queen Mother,” she said, referring to Revelation 12:1, “A great sign appeared in the sky, a woman clothed with the sun, with the moon under her feet, and on her head a crown of twelve stars.”

Gontis said there are special things Mary gives to us – sacramental – which are objects that dispose us to receive grace. She especially highlighted the rosary, scapular and miraculous medal.

“After the Mass and Liturgy of the Hours, the rosary is the prayer the church most recommends,” Gontis said, adding the rosary comes to us from St. Dominic in the 1200s. Mary appeared and gave him the devotion of the Holy Rosary to assist him in combating the Albigensian heresy – which claimed the body was bad and the spirit was good – then wreaking havoc in the Church.

“She gives it to him as a weapon,” Gontis said. “The rosary in its essence is incarnational. It’s a vocal prayer; it’s the touch of the beads and meditation.

“Satan hates the rosary. It’s the perfect weapon against the devil.”

“What else is in our spiritual arsenal? The Brown Scapular,” Gontis said. The Blessed Mother appeared to St. Simon Stock, a Carmelite, and gave it to him in the 1200s. Our Lady’s promise: “Whosoever dies wearing this scapular shall not suffer eternal fire.”

Gontis said the Brown Scapular is for the Carmelite order, but people can ask a priest to pray the Prayer of Investiture for them. The scapular must be worn continuously, and you can’t just wear it and be saved. “You have to be living a life of grace.”

“The devil hates the sacramental, especially those of the Blessed Mother. Why? She crushes the head of the serpent.”

Gontis said Our Lady of Fatima told Lucia, one of the children to whom she appeared, that she wants everyone to wear the scapular.

The design of the Miraculous Medal was originated by St. Catherine Laboure after her apparitions of the Blessed Mother in France in 1830.

“God wants to give us all of his graces through Mary,” Gontis said.

“O Mary, conceived without sin, pray for us who have recourse to thee,” Gontis said, reciting the Miraculous Medal Prayer.

“Mary is our advocate,” Gontis said. “She said everyone who wears it will be granted great graces.”

Gontis suggested reading “True Devotion to Mary” and “The Secret of the Rosary” by St. Louis de Montfort.

The next Theology on Tap, “Trusting God’s Plan: From Federal Government to Full-Time Ministry” presented by Deacon Mike Pascarella of the Archdiocese of Philadelphia, is slated for Monday, Dec. 10 at 7 p.m. at Hops at the Paddock.

Theology on Tap events are free of charge. Food and beverage can be ordered from the menu at the event site. For more information click here or email Alexa Smith at asmith@allentowndiocese.org. 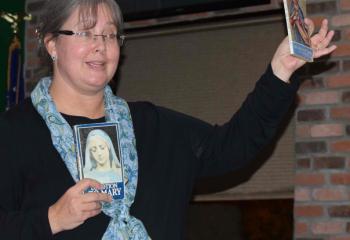 Eva Gontis suggests reading “True Devotion to Mary” and “The Secret of the Rosary” by St. Louis de Montfort while presenting the Theology on Tap session. 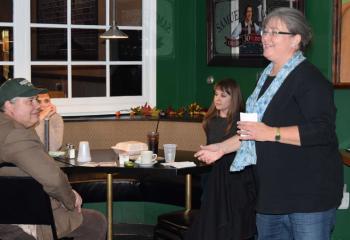 Listening to Gontis speak are, from left: her husband Jim Gontis, director of Evangelization and Catechesis and Sports Ministry, Diocese of Harrisburg; Lauren Wagner, parishioner of the Cathedral of St. Catharine of Siena, Allentown; and Alexa Smith.