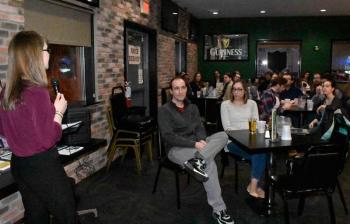 “Coincidence is God’s way of remaining anonymous.” A priest once shared this sentiment with James Doolin, and it has shown itself many times in Doolin’s life.

Doolin, retired special agent FBI and parishioner of St. Joseph the Worker, Orefield, shared this fact while presenting “Finding God in a Broken World” as part of the Theology on Tap series March 19 at Hops at the Paddock, Allentown.

The evening, sponsored by the Diocesan Office of Youth, Young Adult and Family Ministry (OYYAFM), fostered an engaging discussion on how one law enforcement officer found peace, healing and meaning amid both personal and professional encounters with suffering.

Theology on Tap is a monthly series sponsored by OYYAFM. The series is designed to welcome young adults ages 21-35, single or married, together in a casual setting where they can grow in the faith and share community with one another. It originated in the Archdiocese of Chicago, Illinois.

Doolin spoke of how faith helped shape the foundation of his life, and shared experiences in the FBI and his personal life.

Doolin was born and raised in a suburb of Boston, Massachusetts. “There was ethnic and religious diversity in my neighborhood, which was a good experience for me. We didn’t have a lot of money, but my three brothers and I went to Catholic school. My parents thought it was important to have a good foundation in faith.”

“I learned about our responsibility to help others, and that helped me,” said Doolin, who said he always knew he wanted to be in law enforcement.

“I didn’t like people taking advantage of other people. That foundation started at an early age. By high school I knew I wanted to be FBI.”

Doolin said many people helped him along the way, like the police chief in the small town where Doolin’s family moved when he was 12 – he offered Doolin a job as dispatcher, and Doolin worked there throughout four years of college.

By some mistake, Doolin’s guidance counselor didn’t submit Doolin’s college application to state schools. “But by ‘coincidence’ my uncle was a retired state policer officer teaching at a Benedictine college in New Hampshire, and he got me admitted there.”

That college, St. Anselm College in Manchester, New Hampshire, is where Doolin met his wife, “the best thing that ever happened to me.”

Various people and events along the way helped foster Doolin’s compassion, faith and the importance of helping people.

“People think of law enforcement as arresting people and sending them to jail. They do, and it’s important in a civilized society. But there’s more to it,” said Doolin, who joined the FBI in 1986 and retired in 2011.

Recalling John 15:13, “Greater love has no man than this, that a man lay down his life for his friends,” Doolin said, “These people are willing to lay down their lives for people they don’t even know.”

Doolin spoke of an FBI agent who attempted to take his own life. “He was in the car with a gun pointed to his head. My partner, a very compassionate person, was on the roof of the car saying he’d have to shoot my partner first.”

After the crisis was over, Doolin spoke to the agent who tried to commit suicide. “I talked to him a bit about faith,” he said, explaining the man was Christian but had drifted from it. Getting back to his faith helped him and helped him with his family.

Another agent shot a mother by mistake after the woman walked into the line of fire as he was shooting at a criminal. Doolin was assigned to protect the agent and his family, as they were supposed to relocate and be given new identities since there were those who wanted to kill him and his family.

But his wife was a strong Christian and the mother of 10 children. “She refused to move. That’s how strong her belief was that God would protect them,” Doolin said. “In the end, I learned a lot from her. It was a good experience in that I thought I was compassionate, but she helped me.”

The local prosecutor charged the agent with homicide, but in the end he didn’t go to jail.

Doolin worked in Pennsylvania toward the end of his FBI career. During this time he coordinated efforts to help an FBI family from Chicago who was coming with their child to Children’s Hospital of Philadelphia (CHOP). FBI agents drove the family to appointments and helped in a number of ways. “We have a number of families we’ve helped like that.”

Within the first year of his retirement, Doolin’s daughter Casey was diagnosed with leukemia. Casey received the diagnosis of acute lymphoblastic leukemia in March 2012 during her senior year at St. Joseph University, Philadelphia. “A priest from our parish, St. Joseph the Worker, showed up at the hospital, and that meant a lot.”
Casey wanted to go to CHOP, and it was allowed as the hospital accepts patients under age 25. Doolin said

Sister Alice, the chaplain at CHOP, visited Casey every morning and night, and three times a day “when she was in the ICU fighting for her life.”

Sister Alice also wrote a four-part prayer – including a part of Casey’s doctor – to be prayed on the day of Casey’s bone marrow transplant in November 2012.

“If not for the strength of faith, I don’t know what we would have done,” Doolin said.

Though that transplant was unsuccessful, a second transplant in December 2012 was successful.

For the next year Casey tried to build up her suppressed immune system, which had been “beaten down” by treatments such as chemotherapy. During this time, she was in and out of CHOP, and Doolin called St. Joseph’s University to request that a priest come to see her. It turned out that priest, Father Dan, had been a teacher of Casey’s in college. “He was a great comfort.”

“It amazes me how much my Christian faith has formed the foundation for my entire life,” Doolin said.

Speaking of coincidences, Doolin said a hawk flew overhead at the cemetery during Casey’s burial – the hawk is the mascot of St. Joseph’s University and St. Anselm College.

“My wife’s dad always has said if you’re in a position to help someone, you’re obligated to,” Doolin said.

Doolin’s wife asked people for 23 acts of kindness, representing each year of Casey’s life. That has grown into the Casey Doolin Foundation, with proceeds benefitting organizations, groups, families and individuals that have touched Casey’s life. These include St. Joseph’s University Campus Ministry, CHOP and St. Joseph the Worker School’s tuition assistance program.

There is also Casey’s Companions, which helps families of law enforcement facing critical illnesses. “They make home cooked meals for law enforcement families with a child a CHOP, and there are retired agents who drive the families around. There’s now a new chapter in New York,” Doolin said.

Doolin currently works as an investigator with an Allentown firm and with running the foundation. 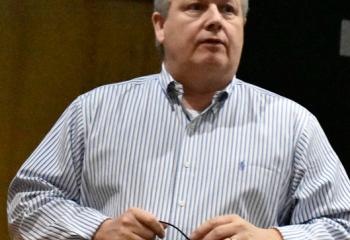 James Doolin presents “Finding God in a Broken World” at the session sponsored by the Diocesan Office of Youth, Young Adult and Family Ministry. 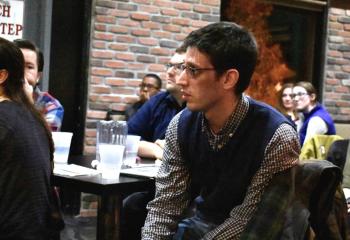 Joseph Marlin poses a question to James Doolin during the evening event. 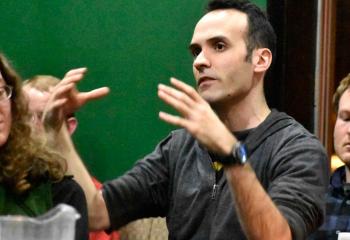 Gabriel Gonzalez asks the speaker a question during the question and answer session that wrapped up the event.