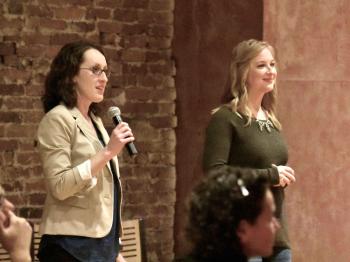 Did you ever wonder what it would be like to have a personal encounter with a saint?

“St. John Paul II was the Pope of the youth and his message, ‘Do not be afraid,’ radiated through his pontificate,” Mitchell said.

Many can say their lives have been affected by the papacy of St. John Paul II, but few have had the opportunity to experience him personally. Mitchell, producer with Ascension Press, West Chester, met the future saint numerous times throughout her life, and she has been forever changed because of it. Mitchell is known for her Ascension Press Channel, Caffeinated Conversations.

The diocesan Office of Youth, Young Adult and Family Ministry (OYYAFM) sponsored the evening, which wrapped up with a question-and-answer session.

Theology on Tap is a young adult speaker series sponsored by OYYAFM for married and single young adults, scheduled for the third Monday of every month at various locations in the Diocese.

It is designed to allow young adults to come together in a comfortable and relaxed setting to share community, learn more about their faith and discuss faith topics relevant to their life experiences. It originated in the Archdiocese of Chicago, Illinois.

“Producing is my passion, especially for the Church,” Mitchell said. “I was inspired by St. John Paul II to do that well.”

Recounting her almost life-long love of St. John Paul II, Mitchell said she read a biography of him for the first time when she was in fourth grade. Her parents ran a private Catholic school in her home state of Wisconsin and led student pilgrimages to Rome.

Mitchell traveled along on those pilgrimages from fifth grade through high school, allowing her to be in the future saint’s presence a significant amount of time.

“I always got to exchange eye contact with him,” Mitchell said, adding though she’s also been in audiences with Pope Benedict XVI and Pope Francis, “John Paul was different. When he drove by it was like a magnetic force field. People were sobbing but joyful – it was tangible.”

Mitchell recalled being there for Easter Vigil and seeing John Paul as “an elderly pontiff but still a giant in his weakness.”

“Moments like that I could stew in and be formed in.”

The first time Mitchell met St. John Paul II, her mother told him they built a school in his name and it was his school. Mitchell was kneeling by his right knee and described it as “otherworldly,” noting everyone cried afterwards they were so overcome with emotion.

The next year Mitchell’s family met the Pope because her brother was in Rome studying to be a priest, and St. John Paul II liked to thank the families of priests there for their gift to the Church.

“Meeting him was a beautiful moment for my family,” Mitchell said, adding her brother told the Pope he had attended World Youth Day in Denver, Colorado, and the pontiff had inspired him to become a priest.

Mitchell was kneeling next to her sister, 13 years her senior but sporting the same bob haircut. “You are littler,” St. John Paul II told Mitchell and then gave her a rosary.

“I gave him a bear hug instead of kissing his ring. It was our moment – it was very special to me.”

Fast forward a few years to April 2005. Mitchell said her mother had been praying she’d be there when the Pope died. The Mitchell family and school students arrived in Rome; the worldwide press was also there as John Paul II was very ill.

“We went to the Vatican and prayed the rosary for him,” said Mitchell, who was interviewed by a number of media outlets, including NBC’s “Dateline,” as she was an English-speaking youth who clearly loved the Pope.

“I told them why I loved him. He encouraged us … he made you feel you were relied upon to carry out a very important mission for civilization,” Mitchell said of the future saint’s connection to youth of the Church.

Mitchell described the “beautiful vigil” of people – many of them youth – praying for the Pope on the eve of his death as “the most beautiful, significant night of my life.” She recalled the Archbishop who led them in praying the rosary said, “When the father is ill, the children gather around.”

“One of the most significant gifts of his papacy was no matter where you were, you felt like he was speaking specifically to you,” Mitchell recalled of St. John Paul II.

She noted after the Pope’s assassination attempt May 13, 1981 – the anniversary of the first apparition of Our Lady of Fatima – he had a beautiful mosaic of the Blessed Mother put in St. Peter’s Square.

St. John Paul II passed away the next day, April 2, 2005. “He was the closest person to me who died. We were all weeping. Before that, some elderly relatives passed away, but it was expected,” Mitchell said.

That day Mitchell and several classmates were confirmed by a cardinal, as it was preplanned before the trip. She took Jacinta as her confirmation name because of the Pope’s comment, “You are littler.”

“The Holy Spirit helped me marinate on that comment over a few years, and I believe it means I should remain childlike,” Mitchell said, noting St. Jacinta Marto was just a very small child when she witnessed the Blessed Mother’s apparitions at Fatima.

Mitchell’s group waited about eight hours to view the Pope’s body lying in state, and she said opposed to the chaos outside, “there was a rush of peace inside” when they finally entered to see the pontiff. She said the song “Jesus Christ You Are My Life” – a song Mitchell associates with the Pope – was playing as they went inside.

Later Mitchell discovered she and two friends were pictured in Time Magazine, sobbing as they looked up to the Pope’s window the night of the vigil. “Time was trying to capture the story that the youth of the world had come for this Pope.”

As a college student, Mitchell returned to St. Peter’s Square on the anniversary of St. John Paul II’s death. There she met some Polish young men, they kept in touch, and they later informed her an oil reproduction of that Time photograph was displayed in a cathedral in Poland.

Mitchell said speaking with those journalists in Rome as St. John Paul II was dying made her want to have a career in journalism. “I saw the power of the media to impact men’s hearts with something good and beautiful, which was John Paul II’s life.”

As coincidence – or not – would have it, a position exactly like what Mitchell was seeking was created at Ascension Press. A friend who worked there told her about it, and the rest is history.

Mitchell said the idea for such a career was instilled in her in 2005, and it took until 2015 to complete the schooling and attain such a position.

“The story is still unfolding. It’s been so beautiful to have that seed planted in fourth grade and see it grow.”

“John Paul II is calling each of us to be fully alive in a culture where that is so needed,” Mitchell said, urging young adults to use their gifts and passions to serve the Church.

Next in the series

Speaker will be Msgr. Michael Mannion of the Diocese of Camden, New Jersey.

St. Teresa of Calcutta touched the lives of many with her inspiring and selfless missionary work. Msgr. Mannion had the opportunity to work with her and will share personal stories of encounter with the saint.

Theology on Tap is a monthly series sponsored by the diocesan Office of Youth, Young Adult and Family Ministry (OYYAFM). The series is designed to welcome all young adults, single or married, together in a casual setting where they can grow in the faith and share community with one another. 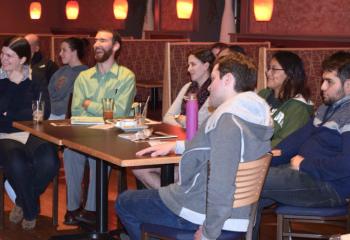 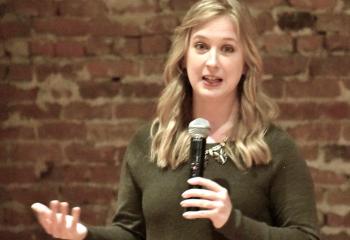 “One of the most significant gifts of his papacy was no matter where you were, you felt like he was speaking specifically to you,” Mitchell recalls of St. John Paul II. 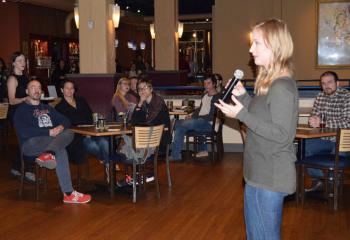 “Producing is my passion, especially for the Church,” Mitchell says. “I was inspired by St. John Paul II to do that well.”