“The Emotions of Jesus” focus of Theology on Tap July Session 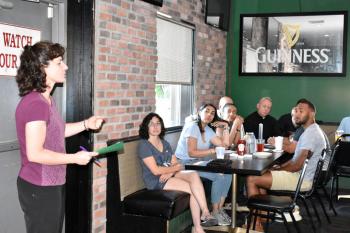 Kelly Anderson presents “The Emotions of Jesus” at Theology on Tap July 9 at Hops at the Paddock, Allentown. Deacon John Maria of the Cathedral of St. Catharine of Siena, Allentown, is seated at right. (Photos by John Simitz)

By JOSEPH NICOLELLO, Special to the AD Times

A packed room at Hops at the Paddock, Allentown welcomed Kelly Anderson, assistant professor at St. Charles Borromeo, Seminary, Philadelphia, for an evening dedicated to the exploration of a topic deceptively simple: What did Jesus Christ feel?

The July 9 presentation “The Emotions of Jesus” was part of the Theology on Tap series sponsored by the Diocesan Office of Youth, Young Adult and Family Ministry (OYYAFM).

Christians will be quick, in good faith, to blurt out the obvious: his love, his wisdom, his mercy. And while these are true and the intention is good, Anderson brought to the session an erudite unpacking of Christ’s transcendent interiority. What made Christ, fully human and fully God, act the way he did beyond the surface level? What patterns do we find? What do exegetical linguistics bring into this discussion?

“Why are emotions interesting?” asked Anderson, a doctoral candidate at Catholic University of America, Washington, D.C.

“Think about it: they are interesting because they’re so deep. If I did something out of the ordinary right now, everyone in this room would have their own specific, emotional reaction. Each reaction would be rooted in the individual’s life and hence would be emblematic of their entire person. Emotions reveal. What, then, do Christ’s emotional reactions tell us? What do we find in analyzing his interiority?”
Anderson said three of Christ’s emotions vital to a greater understand of him are compassion, desire, and anger.

Beginning with compassion, in its original, biblical Greek, compassion (συμπόνια) translates as having been ‘…moved by inward parts.’ It is a literal emotional thrust so intense that its occurrence propels bowels and intestines to propel themselves, and thus the body they inhabit, into action.

“This is worth knowing,” explained Anderson, “Because the word appears in almost exclusive regard to Jesus Christ. And further, when compassion comes upon Jesus, it always leads to action. Compassion is not only in the original Greek implicative of an emotion so strong it moves the body both inside and out, but that when Christ is filled with compassion it leads to action every single time.”

By way of example, Anderson elucidated upon Christ’s compassion by two accounts recorded in Mark, at 1:41 and 6:34: “At 1:41 in Mark we read that Christ is moved with compassion. He cures the leper at once with instruction to tell no one. Of course, the leper tells everyone. It ends up horribly for everyone except the brazen leper.”

Anderson said Mark 6: 34 tells us that Christ had compassion as he looked out upon the crowd, for they were like sheep without a shepherd. This merciful, prescient observation is not all – it of course springs Christ into action, as he then begins to teach.

“The whole of Jesus is compassion,” said Anderson, carefully transitioning from contemplation to some moments later making the attentive room break into collective, roaring laughter.

“Even when we consider the Prodigal Son parabolic compassion; not many would have acted the same way upon his return. It is noted he had no mother; heck, if I was his mother, he’d have gotten a good whooping out back after the

homecoming embrace!”
“Christ does what he does because he is motivated by compassion and then to fulfill the will of his Father. Suffice it to say that the compassion of Jesus Christ, from earliest Greek to newer English translation, is unanimous with the will of God,” Anderson said.

The second emotion brought forth was desire. Entering Jerusalem, Christ laments, “I have longed to gather…” This desire, like many of Christ’s, were thwarted in his lifetime. Such is a masterful example of Anderson’s reconsideration of the constitution of Christ’s emotional reality.

“Christ’s final prayer was the desire to be with his disciples forever. What would yours be – what would mine be?” Anderson said. “Most of us would be guaranteeing Mosaic vengeance in the three days it would take until the Resurrection. We would not be dying a brutal, tragic death, wishing to be with our friends forever; and yet, if we believe in heaven, why wouldn’t we desire anything but this?”

In further analysis of desire in the Gospels, Anderson chose to present listeners with examples in Luke 22:15 and Mark 3:13: the former is Christ’s eager desire to have Passover with his disciples before he suffers, whilst the latter illustrates Christ’s mountainside call to those he longs to come to him.

Through these examples and Old Testament reflections, Anderson provided the audience with another beautiful trait of Christ, one so subtle we may have not quite ever fully noticed it; that Jesus’s desires are never self-directed. Rather, Christ does not desire the thing for itself, but rather for the Other(s). All of Christ’s desires are Other-oriented.

This is evident even when tempted in the desert to turn rocks into bread, whereby primal hunger transcends consideration of selfishness. And yet even here Christ declines the invitation, for not only is it a matter of the Devil’s cunning to persuade Christ, but to play the Devil’s fatal game for the mere prize of self-satisfaction.

“It’s amazing when we compare our desires to Jesus’s,” reflected Anderson.

The third and final emotion on the evening was anger, which is remarkably absent in Christ when we consider he was besieged with death threats from the womb unto the Cross. He is perpetually provoked, crowds following constantly, and yet left weary but never angry at the way things are.

“He consoles rather than reproaches the disciples. And in Mark 10: 13 – 16 when the children are told to scram by the disciples jockeying for positions of status, Christ is not angry at the disciples speaking wrongly on his behalf, but rather he is heartbroken that the most vulnerable in society need him too.”

Anger, then, is never when Christ is merely offended; rather, it is, with love, two sides of the same Christian coin. Christ’s emotions resembling anger are less blind rage at things done to him, but something approaching anger because the object of his love, the world, is amok with thieves and vipers.

“Which naturally brings us to the cleansing of the temple. Now, it’s not like Jesus just woke up one day and lost his mind. It was like Ezekiel’s making figurines, or Isaiah walking around naked, or Hosea marrying a prostitute: the role of the prophet was symbolic, and Christ’s cleansing of the temple was not just out of anger, but furthermore symbolic of the impending destruction of the temple. And indeed, it fell in 70 A.D,” Anderson said.

“Christ’s divine pedagogy can, in summary, be traced back to his first miracle at the wedding. It is not with anger that he calls Mary ‘Woman’, but so as to convey that Mary, too, can now along with the others be his disciple, disciples of the Son of God, God himself. Woman, too, can be considered as Christ addressing Mary as God.

“For we so often, and rightly so, refer to God as he. Yet with Christ referring to Mary as woman, she, at the first miracle, it is perhaps his simultaneous announcement to his Father in Heaven. It is not mere anger after all.”
Indeed, the emotions of Christ are both simple and anything but; they are the interiority of God, who knows us in a way we can never fully convey to anyone but God.

Theology on Tap is a monthly series sponsored by OYYAFM. The series is designed to welcome young adults ages 21-35, single or married, together in a casual setting where they can grow in faith and share community with one another. It originated in the Archdiocese of Chicago, Illinois. 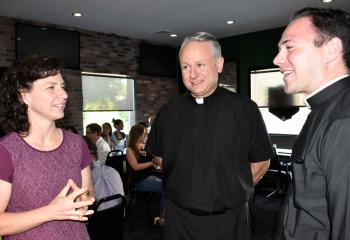 Kelly Anderson, left, chats with Deacon John Maria and seminarian Philip Mass during a break in the evening session. 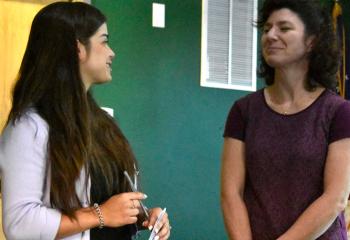 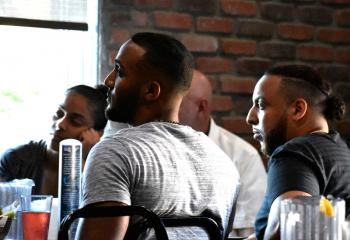 A table of those attending listen to Kelly Anderson’s presentation. 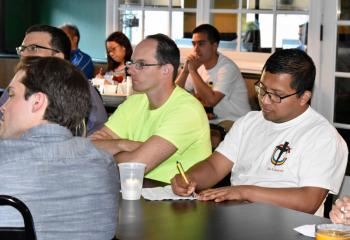