Three men to be ordained priests at June 1st ceremony

Diocese of Allentown Bishop Alfred A. Schlert will ordain three new priests at a ceremony at the Cathedral of Saint Catharine of Siena in Allentown on Saturday, June 1 at 10:30 AM. The three men make up the diocese’s largest ordination class in five years.

The men to be ordained, all of whom prepared for the priesthood at St. Charles Borromeo Seminary near Philadelphia, are: Rev Mr. Giuseppe C. Esposito, 37, of Allentown, Rev. Mr. John C. Maria, 51, of Sinking Spring and Rev. Mr. Zachary R. Wehr, 28, of Whitehall.

Rev. Mr. Esposito is the son of Joseph and Debra Esposito. He is a graduate of Marian Catholic High School, Lehigh Carbon Community College and DeSales University where he earned a Bachelor of Science degree in Nursing. He earned a Master of Divinity degree and a Master of Arts degree in pastoral theology from St. Charles Seminary and is a member of the Cathedral of St. Catharine of Siena in Allentown. During his diaconate year he served at St. Catharine of Siena Church in Reading.

Rev. Mr. Maria is the son of Theresa Maria of Pittston and the late Cataldo Maria. He is a graduate of Pittston Area Senior High School and Penn State University where he earned a Bachelor of Science degree in Economics. He has an adult son James J. Maria, a daughter-in-law Abby Maria and a grandson Donato Maria.  Rev. Mr. Maria was the co-owner of a small IT business in Allentown before entering the seminary. He earned a Master of Arts degree in Theology from Augustine Institute in Greenwood Village, Colorado and a Master of Divinity degree from St. Charles Seminary. He is a member of St. Ignatius Loyola Church in Sinking Spring and served his diaconate year at the Cathedral of Saint Catharine of Siena.

Rev. Mr. Wehr is the son of Dennis and Kathleen Wehr of Whitehall. He graduated from Whitehall High School and attended East Stroudsburg University before entering the seminary where he earned a Master of Divinity degree. He is a member of Holy Trinity Church in Whitehall and during his diaconate year he served at St. Jane Frances de Chantal Church in Easton. 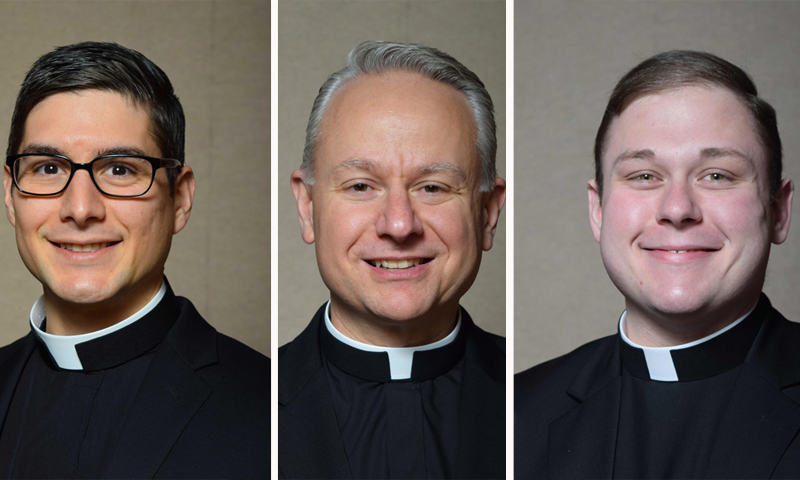