The Vatican announced today that Pope Francis has appointed a priest of the Diocese of Allentown, Reverend Monsignor Alfred A. Schlert, as the Fifth Bishop of Allentown.

Bishop-elect Schlert is the first priest of the Diocese to be appointed to serve as its Bishop. He has been serving as the Diocesan Administrator since his election by the Diocesan College of Consultors on February 1, 2017 following the January 31 installation of his predecessor Most Reverend John Barres as the Bishop of Rockville Centre, NY.

Bishop-elect Schlert was born to Alfred and Marylou (DeRose) Schlert in Easton on July 24, 1961, just six months after the Diocese of Allentown was formed. He was educated at St. Jane Frances de Chantal Elementary School and Notre Dame High School, both in Easton. He prepared for the Priesthood at St. Charles Borromeo Seminary near Philadelphia and the Pontifical Roman Seminary and St. John Lateran University in Rome. Most Reverend Thomas J. Welsh ordained him a priest at the Cathedral of Saint Catherine of Siena in Allentown on September 19, 1987.

He served as an assistant pastor of St. Francis of Assisi Church in Allentown, as a professor at his alma mater Notre Dame High School and as the Catholic chaplain at Lehigh University. During his years at Notre Dame he resided at St. Anthony of Padua Church and St. Bernard Church in Easton and at Sacred Heart Church in Bath. He completed graduate work at Pontifical North American College and Pontifical Lateran University in Rome and received a Licentiate in Canon Law from the Pontifical Lateran University in 1992.

Bishop-elect Schlert’s Ordination and Installation will be held on Thursday, August 31at the Cathedral of Saint Catharine of Siena in Allentown.

Bishop-elect Schert will hold a news conference at the Cathedral of Saint Catharine of Siena at 11 o’clock THIS morning. The news conference will be streamed live on the Diocesan Facebook page: www.Facebook.com/DioceseofAllentown. 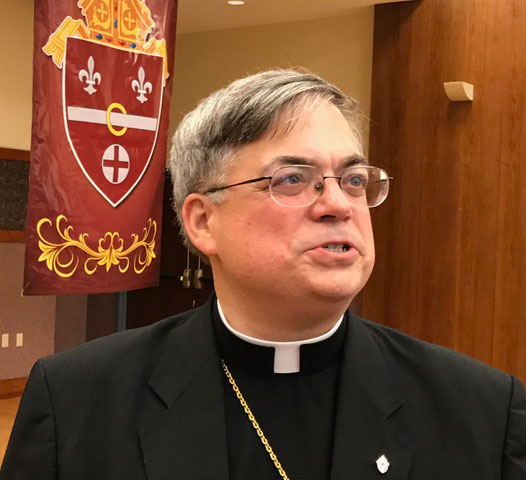