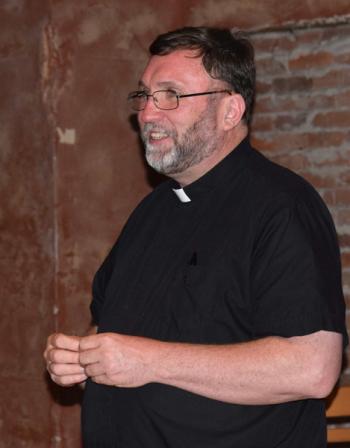 “Ignatian spirituality is a spirituality for everyday life. It insists that God is present in our world and active in our lives. It is a pathway to deeper prayers, good decisions guided by discernment, and a life of service to others,” said Father Christopher Walsh, pastor of St. Raymond, Philadelphia, at Theology on Tap.

Father Walsh and an estimated 30 young adults gathered at Allentown Brew Works May 21 to probe the spiritual exercises of a Spanish Jesuit priest during “St. Ignatius Loyola and the Discernment of Spirits.”

Father Walsh began the discussion with St. Ignatius’ wealthy background and the tragedy he endured when he was hit with artillery, similar to a cannon ball, during a battle against the French.

“His leg and hip were broken. Ignatius sought recovery at his family’s castle. When the leg resettled, the unthinkable became a reality. His leg was crooked. Ignatius, being a vain 30-year-old man, broke his leg again to reset it,” said Father Walsh.

During his first recuperation, Ignatius read nearly all the books in the castle to pass the time. It wasn’t until his second recuperation that he read the Bible and “The Lives of the Saints.”

“God used his vanity and desire to ‘look good.’ Ignatius purposely avoided those two books until there was nothing left to read,” said Father Walsh.

After reading the Bible and “The Lives of the Saints,” Father Walsh said Ignatius experienced a movement in his heart and was attracted to the saints and the Word of God.

“The whole experience radically changed him and he wanted to join the army that served the Lord – so he began the process of establishing the Society of Jesus,” he said.

While studying theology in Paris, Ignatius befriended and became roommates with St. Francis Xavier and St. Peter Faber, and eventually formed the Society of Jesus together.

“That is a huge moment in history. I don’t think the world will ever see three college roommates all become saints,” joked Father Walsh.

Ignatius, Francis and Peter formed “companion friends of Jesus” while contemplating their future in Rome.

They eventually decided to form a religious order under a vow of obedience to a superior, Ignatius. The companions, soon to be called Jesuits, vowed to go wherever the Church’s needs were the greatest and wherever they could help the most souls.

“Ignatius never leaves Rome. Instead, he writes the core of Ignatian spirituality – ‘The Spiritual Exercises of Ignatius of Loyola,’” said Father Walsh.

Composed between 1522 and 1524, the exercises are a set of Christian meditations, contemplations and prayers. They are divided into four thematic “weeks” of variable length and are designed to be carried out over 28 to 30 days.

The exercises were composed with the intention of helping participants in religious retreats discern the will of God in their lives, leading to a personal commitment to follow Jesus whatever the cost.

“If you can do it – it will change your life forever. But most people can’t get away for 30 days,” said Father Walsh.

“But that doesn’t mean that God does not desire you. God is longing for you. He never forces himself on anyone. He waits for you to be free,” he said.

Like Ignatius, Father Walsh said it is critical for people to pay attention to the interior movements in their hearts.

When experiencing movements of the heart, Father Walsh said, Ignatian spirituality contends that a person is always in a state of consolation or desolation.

Father Walsh said Ignatian spirituality maintains “spiritual consolation” is an experience of being so on fire with God’s love that people feel impelled to praise, love, and serve God and help others as best as they can.

In contrast, “spiritual desolation” is an experience of the soul in heavy darkness or turmoil. Ignatian spirituality describes this state as being in doubt, bombarded by temptations and mired in self-preoccupations.

Father Walsh also pointed out other forms of spirituality like Dominican, Franciscan, Carmelite and Benedictine.

“Try them all out. Read about all of them. Ignatian spirituality is different in a sense because it’s about work, prayer, hospitality and a willingness to welcome others to your world,” he said.

For Father Walsh, he said he became attracted to Ignatian spirituality after Pope Francis was asked “Who is Jorge Mario Bergoglio?” during an interview with an Italian magazine in 2013.

“His response was ‘I am a sinner whom the Lord has looked upon,’” recalled Father Walsh.

“The idea that ‘I am a sinner’ and I don’t have to hide from sin – was so attractive to me,” he said.
“God knows your weaknesses and faults. There is no reason to hide.” 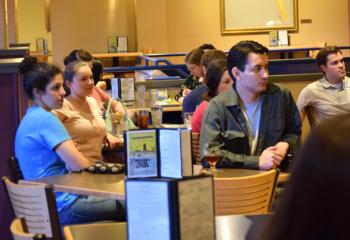 Young adults listen to the discussion “St. Ignatius Loyola and the Discernment of Spirits.” 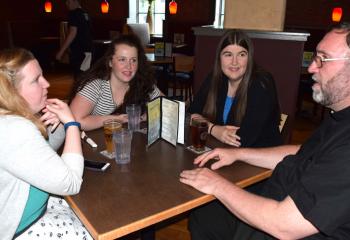 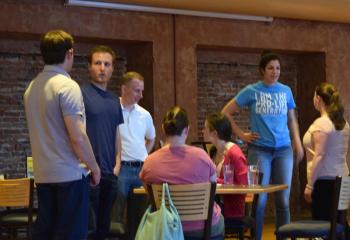 Young adults mingle before the Theology on Tap.