World-Renowned Company Allen Organ Got Its Start at Cathedral, Where it Installed its First Organ in 1939 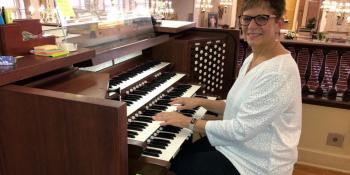 Allen Organ, based near Allentown, has grown into a world-renowned company, having built organs for 80,000 churches, theaters, and concert halls in 70 countries.

But the first organ the company ever sold was installed a bit closer to home – at St. Catharine of Siena parish in Allentown.

The founder of Allen Organ, Jerome Markowitz, had just received his first patent at the young age of 22. He built the electronics for that first organ by hand, and parts of it — complete with rows of vacuum tubes — are on display in the company museum.

The year was 1939, more than two decades before the Diocese of Allentown would be formed by splitting off five counties from the Archdiocese of Philadelphia. 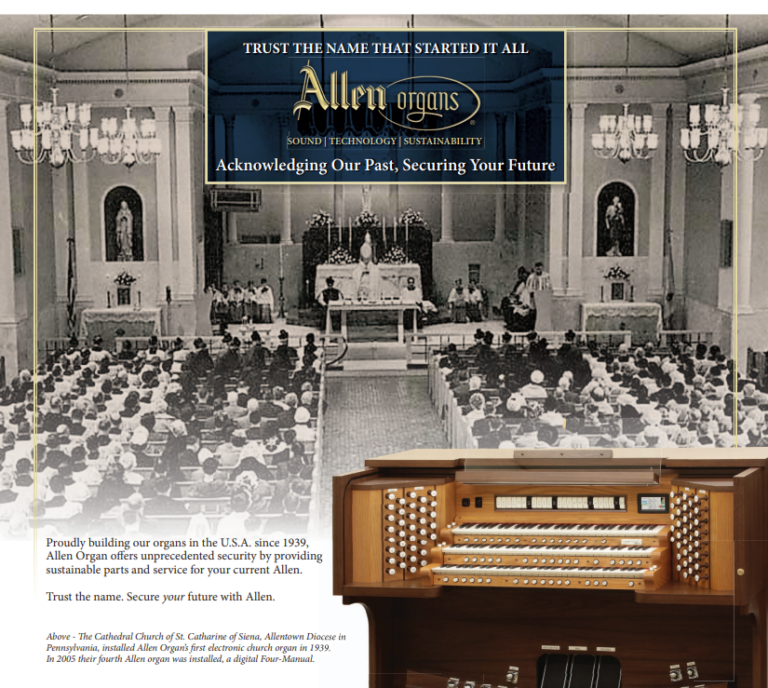 As part of its Anniversary Celebration, Allen Organ is running an ad in national publications featuring a historic photo of the Cathedral of St. Catharine of Siena, where it installed the first organ it ever sold.

At that time, the St. Catharine’s parish church was at 210 N. 18th St., a building that serves today as part of St. John Vianney Regional School. The parish would build a new church, at the corner of 18th and Turner streets, in 1954, and that is the building that would be named the Cathedral of St. Catharine of Siena by Pope John XXIII on Jan. 28, 1961 – the same day the Diocese of Allentown was created.

With its factory so close by, you might say Allen Organ is the “home team” organ supplier for parishes in the Diocese. The company estimates it has sold about 75 church organs to diocesan parishes over the years. The Cathedral parish has upgraded its organ several times since 1939, and each new one was an Allen.

Allen Organ operates the largest organ factory in the world, according to the family-owned company, with 150 employees. Raw wood is turned into fine walnut and oak cabinets by skilled craftsmen, and small electronic parts are assembled in a clean room into the advanced circuitry that powers today’s digital organs. Vacuum tubes are long gone – replaced by rows of microchips.

For hundreds of years, all organs had pipes. Before electricity, that meant people pumping with their arms or feet to generate the air that was needed for each pipe to make a sound when an organ key was pressed.

Today, Allen Organ’s claim to fame is that it can create pipe organ sound without the cost or space requirements of pipes, through digital technology. It was an idea that the company’s young founder, already a technical whiz, dedicated his life to after hearing his first pipe organ in the Muhlenberg College chapel.

The company has built organs for about 60 Catholic cathedrals around the world. There are Allen Organs on all seven continents (yes, that includes Antarctica, where there’s a small one in a military base chapel).

One of the company’s proudest moments, according to current President Steve Markowitz, Jerome’s son, came when he helped install an Allen Organ in St. Peter’s Basilica in Rome, for use by the Sistine Chapel Choir.