World Mission Sunday: Every Christian a Witness to Christ in Daily Life 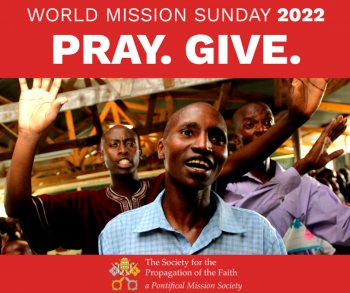 “You shall be my witnesses” from Acts 1:8 is the theme for this year’s World Mission Sunday, to be celebrated Sunday, Oct. 23. The theme urges all Christians to proclaim Christ’s message of salvation in every aspect of our daily lives.

World Mission Sunday is always the next to last Sunday in October, and the World Mission Sunday Collection is taken at Masses that weekend. The day is celebrated in all the local Churches as the feast of universal solidarity so Christians the world over will recognize their common responsibility for the evangelization of the world.

“On this World Mission Sunday, join Catholics around the world praying and giving generously in the collections for the Church’s missionary work,” said Holly Benner, Director of the Diocesan Missionary Childhood Association, in a video message for World Mission Sunday. The video can be viewed here.

Benner is also National Coordinator for the Missionary Childhood Association. She writes a blog, “Holly’s Headlines,” about her years as a missionary in Africa, at https://blog.missio.org/hollyheadlines.

After announcing this year’s theme, the Pope reflected on three foundations of “the life and mission of every disciple.”

First is “the call of every Christian to bear witness to Christ.”

Pope Francis went on to consider a second foundation of the Christian mission: “to the ends of the earth.” This phrase challenges modern Christians to proclaim Christ to those who have still not encountered Him.

The third foundation of mission: “You will receive power from the Holy Spirit.”

In conclusion, the Pope expressed his dream to see a “completely missionary Church, and a new era of missionary activity among Christian communities.”

The first is the 400th anniversary since the establishment of the Sacred Congregation De Propaganda Fide, now the Congregation for the Evangelization of Peoples.

This year also marks the 200th anniversary of the foundation of the Society for the Propagation of the Faith by a young French woman, Pauline Jaricot, who will be beatified in 2022.

Pope Pius XI granted the Society the status of “Pontifical” 100 years ago, along with the Association of the Holy Childhood and the Society of St. Peter the Apostle.

Pope Francis prayed that the local Churches will “find in these Societies a sure means for fostering the missionary spirit among the People of God.”