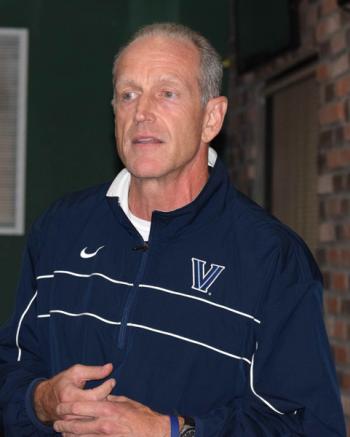 “Before you fly, you have to learn how to fall. You have to have faith and spirit in order to get back up,” said Father Rob Hagan, chaplain for Villanova University’s men’s basketball team that clinched the 2018 NCAA National Championship.

Father Hagan, also Villanova’s senior associate athletics for student-athlete welfare, led the discussion “The Priest on the Bench: Stories of a Basketball Chaplain,” Sept. 10 at Theology on Tap (TOT).

Young adults and Villanova alumni and supporters were on hand at Hops at the Paddock, Allentown to hear Father Hagan’s insight on spirituality and sports.

Hagan began the discussion by thanking the adults for not abandoning their faith and for maintaining a spiritual life despite the fallout of the Pennsylvania grand jury report on child sex abuse.

“Thank you for keeping with us and keeping the faith in the midst of brokenness. I give you all the credit in the world for hanging in there,” he said.

In his talk, he told the adults that faith is not something to check on Sunday and said the values of the Church are universal and should be weaved into everything they do.

As chaplain for the basketball team, he said he leads the team in prayer before and after every game and never prays to “win” the game.

“Prayer is more than a wish list. We never talk about winning or being in the championship. We talk about playing for each other and for those who went before us. We know prayer is much deeper. Prayer is conversation with God,” he said.

Before he talked about winning the NCAA championships, Father Hagan said success is not possible with losing and failing.

Pointing to the team’s 2015 appearance in the tournament, Father Hagan reminded the adults that the team flamed out in the first game.

“We got into that locker room and they were all in tears with broken hearts. So we did what we always do – we stood up and joined hands and prayed,” he said.

“We challenge each other that this is not how we keep score. We keep score differently. Loss does not define who we are.

It’s more than a sport – it’s a brotherhood. Out of that fall, those men came out with wisdom, hunger and humility,” said Father Hagan.

He related the story of Jesus traveling with his disciples to Galilee from Jerusalem and how they faced the challenge by going through Samaria – a region of people that hated the Jewish people.

“When Jesus was planning his journey, his disciples were fully prepared to go around Samaria – even though the direct route is through Samarian. Jesus knew it would be hard and that there might be conflict. But he also knew that they might make friends and learn about other people,” said Father Hagan.

He also pointed out that in life people have to go “through” many things that they can’t and shouldn’t avoid.

“We don’t go through it alone. We go through it together with our brothers and sisters, our teammates and our families,” he said.

Like Villanova star Donte DiVincenzo, who went on to play professional in the National Basketball Association, Father Hagan said he sacrificed playing time after coaches decided to redshirt him after recovering from a broken foot.

Unable to play when the team made it to the Final Four against Oklahoma University, Father Hagan said DiVincenzo played like Oklahoma star Buddy Heild during practice to improve his team that ultimately became victorious.

“To achieve something great – we need people to be humble. When we got back to the locker room, the first person Coach recognized was DiVincenzo,” he said.

“That’s who we are. We celebrate things that people don’t always notice. We keep score a different way. Our humility is our strength, but don’t ever mistake kindness for weakness,” said Father Hagan. 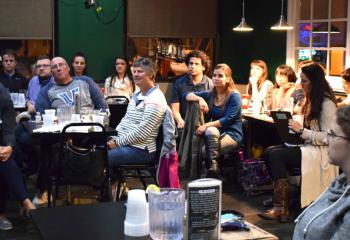 Young adults listen during “The Priest on the Bench: Stories of a Basketball Chaplain” at Hops at the Paddock, Allentown. 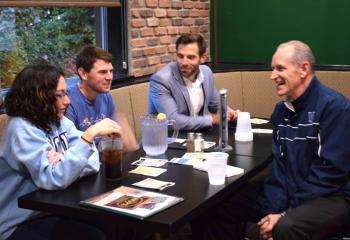