Two New Seminarians for the Diocese of Allentown 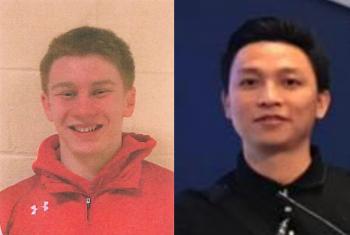 Kolbe, 18, is the seventh child of 14 of Rob and Andrea Eidle. He was baptized at St. Ignatius and received First Holy Communion from the hands of his godfather, Father Jon Romanowski, F.S.S.P., at his first Mass in Lincoln, Nebraska.

The family was homeschooled, attended daily Mass and prayed the rosary every night. Kolbe served as an altar server and helped lead the rosary before weekend Masses.

As a teenager he attended a Franciscan LEAD, a weeklong retreat attached to Steubenville youth conferences, and his faith intensified at multiple Quo Vadis retreats he attended.

He worked at St. Ignatius as a sacristan, and director, organist and occasional cantor for the parish youth choir.

He also wrestled for Wilson High School, was co-captain for two years and has 120 career wins.

His brother Keaton is also a seminarian for the Diocese of Allentown in Fourth College.

“Seminary has been an amazing experience and growth for me,” said Kolbe.

“Being in a whole school of brothers working toward the same goal of being able to one day serve the faithful of the Church is a beautiful and encouraging experience.

“I look forward to growing closer to Our Lord through formation and God-willing using what I learn to serve and care for the people of God.”

He was baptized by Father Francis Xavier Nguyen Duc Dat, O.P. in Thanh Tam (Sacred Heart) Parish, Xuan Loc Diocese, where his grandparents lived after they immigrated from the North of Vietnam in 1954 because of the control of the communists in their hometown.

His first catechist was his grandmother, Mary Tran Thi Chieu, who prayed all day with a rosary in her hand.     He attended elementary school with Dominican sisters and Nguyen Hue public primary school; secondary school Ly Tu Trong and Vo Truong Toan; and graduated from Nguyen Train High School in 2012.

He served 10 years as an altar server and sacristan, and became a catechist and taught teenagers.

As a requirement for a missionary program, he received a degree in architecture in 2017 from the University of Architecture, Ho Chi Minh City. He then studied for a year at SS. Cyril and Methodius Seminary in Orchard Lake, Michigan.

This past summer he had an opportunity to visit the Diocese of Allentown and lived at Sacred Heart Church, West Reading.

“In the seminary, I have opportunities to grow and develop myself in many aspects,” said James.

“First of all, the prayerful environment is the greatest thing that I received from the seminary. By attending daily Mass and Liturgy of the Hours, I was able to deepen my relationship with God, be closer to him and discover many beautiful spiritual experiences.

“The seminary also is a place where I seek God through intellectual activities. For this semester, my focus is to improve my language skills to prepare for studying in the future.

“Finally, the fraternity of the community is the encouragement that is always beside and supports me to go over any challenges. After a few months of living in the seminary, I feel this place is like my second home. I believe that the seminary will be a perfect place to prepare for my priesthood in the future in human, spiritual, intellectual and pastoral dimensions.”