Turning the page to books of interest to Catholic readers 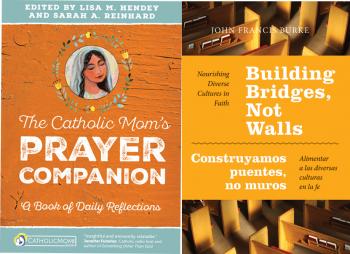 Catholic readers may enjoy settling down with one of these books in front of the fire and enjoying a good read this fall: “A Catholic Mom’s Prayer Companion” co-authored by Celeste Behe; “Building Bridges, Not Walls” by John Francis Burke; “It’s Dangerous to Believe: Religious Freedom and Its Enemies” by Mary Eberstadt; and “With God in America: The Spiritual Legacy of an Unlikely Jesuit,” by Jesuit Father Walter Ciszek.

Celeste Behe said the newly published book “The Catholic Mom’s Prayer Companion: A Book of Daily Reflections” “is an uplifting resource that provides a daily dose of encouragement to Catholic mothers. With the diocesan Catholic Women’s Conference soon to take place, the release of “The Catholic Mom’s Prayer Companion,” a book which affirms mothers in their own unique ‘mission of mercy,’ could not have occurred at a better time for the mothers within our diocese.”

Behe is an author of the book of more than 80 contributors, edited by Lisa Hendey and Sarah Reinhard and published in 2016 by Ave Maria Press.

Behe, a speaker and author, is a parishioner of St. Theresa of the Child Jesus, Hellertown and the mother of nine children who were homeschooled. She is a senior writer at “Catholic Digeset,” blogger for the “National Catholic Review” and columnist for http://catholicmom.com/.

“The Catholic Mom’s Prayer Companion is a daily resource designed especially for busy mothers who have little time to spend in prayer. For each day of the year, the book offers an inspiring quotation followed by a reflection, a brief prayer, and a question or thought to ponder throughout the day,” said Behe.

“The daily readings help a mother to stay in touch with the seasons of the church year, grow in friendship with the saints and discover the spiritual meaning of secular holidays. Lighthearted content for occasions such as Houseplant Appreciation Day and National Popcorn Day adds a bit of fun.

“The daily entries are also geared to monthly themes like ‘Family Fun,’” ‘Renewal,’ and ‘Calm in the Chaos,’ making the book a useful pick-me-up for a mom who might be facing a particular issue.

“A few minutes of morning quiet with the ‘Catholic Mom’s Prayer Companion’ are all a mom needs to invite God into her day and feel his presence. Mothers might be surprised to find that a little bit of prayer and meditation helps their days to flow more smoothly and serenely.

“In our present culture, the vocation of motherhood is not just underappreciated, but belittled. ‘The Catholic Mom’s Prayer Companion’ affirms mothers in their God-given vocation while offering them encouragement, reassurance and spiritual nourishment.”

Behe has a speaking apostolate that aims to show, through humor and storytelling, that there is nothing as joyful as the Catholic life. The name of the apostolate, “A Perpetual Jubilee,” comes from these words of St. Theophane Venard: “Be merry, really merry. The life of a true Christian should be a perpetual jubilee, a prelude to the festivals of eternity.”

“A particular goal of ‘A Perpetual Jubilee’ is to recognize and encourage Catholic mothers in their vocation, and to help them find joy in the ordinary,” Behe said.

Behe will give the talk “Nine Kids, No Dishwasher: The Great Adventure of Mothering Many” and doing a signing for “The Catholic Mom’s Prayer Companion” Thursday, Oct. 20 at 6:30 p.m. at the Hellertown Library.

Author John Francis Burke, a native of Bethlehem, focuses on nourishing diverse cultures in faith in “Building Bridges, Not Walls,” published by Liturgical Press in 2016. It is bilingual in English and Spanish.

Burke was baptized at SS. Simon and Jude, Bethlehem and received his first Communion and confirmation at St. Anne, Bethlehem. Much of his formation in liturgy comes from his years serving as a lector and cantor at St. Anne 1975-79 and briefly again in 1985. His parents, John and Patricia Burke, reside in Bethlehem.

Burke, who references Holy Infancy, Bethlehem in the book, said, “All the best to you in the Diocese of Allentown where I think this book is particularly relevant.”

Burke discussed the book the weekend of Oct. 1, both in English and Spanish, at the Dallas, Texas Ministry Conference.

Burke provided the following information on the book:

“Are you a leader, clergy or lay, in a Catholic parish wrestling with how to bridge the multiple ethnic, linguistic and racial communities that increasingly comprise your parish? With these cultural backgrounds frequently come diverse perspectives on everything from how to communicate with each other to how to understand God. In addition, such cultural divisions all too often manifest differences in the access these communities have to parish decision-making structures.

“His insights are especially crucial for areas of the country outside the U.S. Southwest and Florida, which are experiencing a tremendous growth of Latino Catholics in parishes that have been previously composed of European American Catholics.

“By understanding the spiritual imaginations that inform European American, Latino American and other U.S. racial/ethnic Catholic constituencies, Burke suggests how in a constructive manner newer church members can transform the legacy of past members and conversely how longstanding members can be welcoming to newcomers.”

For the past three decades Burke has taught political science and religious studies at universities primarily in Texas. He has also coordinated Catholic social teaching centers at the University of St. Thomas-Houston, and Cabrini College, Radnor.

Burke has published articles on political theory, multicultural relations, social justice, and religion and politics in several journals and periodicals including “The Review of Politics and Commonweal.” He has appeared as a commentator on political events on several Texas media outlets, in English and Spanish.

In addition to his academic responsibilities, Burke has served on several committees and conducted workshops in Texas dealing with social justice and multicultural issues. He also has extensive experience in church liturgy and while in Houston earned a “reputation” for developing multilingual choirs.

“It’s Dangerous to Believe: Religious Freedom and Its Enemies”

“I have long been pondering the possibility of a wide-scale persecution of the church in this country. Modern technology would make such an attack on Catholics particularly efficient. Apparently I am not alone in my prognostications.

“More than a decade ago I was having lunch with my friend Eric, who was then the father of eight. Out of the clear blue he said, ‘You know, there is a real advantage to clerical celibacy.’ I thought my friend was going to make a wisecrack in the spirit of Rodney Dangerfield: My wife and I were perfectly happy for 30 years … and then we met.

“I was completely caught off guard for what followed. ‘When the persecution comes – and I say when, not if – when the persecution comes, they will not be able to use your children as blackmail.’ Eric’s comment revealed a parent’s anguished concern for his children growing up in an increasingly secular world. Many people think Eric and I are foolish, but, as I say, we are not alone.

“Imagine my reaction when another friend gave me a copy of Mary Eberstadt’s 2016 book “It’s Dangerous to Believe.” The author chronicles how today’s secular activists are persecuting Christians and Christian institutions (schools, hospitals and charities) with a zeal reminiscent of Sen. Joseph McCarthy’s red scare or the Salem witch trials.

“Why such hostility? Eberstadt argues that the culture war, sparked by the advent of the birth control pill and the subsequent sexual revolution, is really a struggle between two competing faiths. Secularists are championing, not the absence of religion, but a creed, catechism and set of dogmas all their own.

“Despite a bleak beginning,” the book ends on a note of hope. It ought to be read, not only by believers, but especially by all decent, rational Americans.

“With God In America: The Spiritual Legacy of an Unlikely Jesuit”

This book is a newly published book regarding Jesuit Father Walter Ciszek, the author of “With God in Russia” and “He Leadeth Me.” The Shenandoah native’s cause for canonization is being considered. The book includes a foreword by Cardinal Timothy Dolan of New York.

Father Ciszek volunteered to answer the call for missionaries in Russia and was arrested as a Vatican spy in 1941. He spent six years in the Lubianka prison in Moscow. In 1963 he returned to the United States as part of a prisoner swap with the Soviet Union.

DeJak shared information from the publisher, Loyola Press, which sums the book up well:

“In 1963, following 23 years of hard labor and abuse in Russian prison camps, Walter J. Ciszek, S.J., finally returned to America. Had he come back a bitter man, or a man of diminished faith, it would have been hard to fault him. But he didn’t. For the remainder of his years, until his death in 1984, Father Ciszek’s grace, faith, and wisdom touched – often in profound and lasting ways – everyone who came into contact with him.

‘“With God in America’ is a collection of previously unpublished writings on Ciszek’s post-imprisonment life and thoughts. The contents – which include articles he wrote, speeches he delivered at retreats, letters he sent to people he was counseling and interviews with individuals who knew him personally – present a man unbroken by all that he had endured and eager to share God’s love with others.

“From Ciszek’s first days back home in the States to his final words before his death, ‘With God in America’ demonstrates that saintliness isn’t primarily about acting heroically in dramatic or devastating circumstances, but about honoring the ordinary, everyday aspects of life as treasured gifts from God.”

An annual Mass celebrates the life of Father Ciszek, who was born in 1904 and entered the religious order of the Society of Jesus. He was ordained in 1937 as the first American Jesuit in the Byzantine Rite. This year’s Mass is slated for Sunday, Oct. 16 at 2 p.m. at St. Casimir, Shenandoah.