‘Trusting God’s Plan’ at Center of Theology on Tap Session 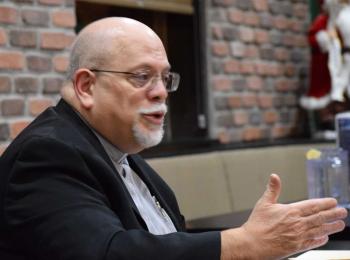 “The message for all of us is: the reason you’re here tonight is God is active in your lives,” Deacon Mike Pascarella told young adults gathered for the Theology on Tap session “Trusting God’s Plan: From Federal Government to Full-Time Ministry” Dec. 10 at Hops at the Paddock, Allentown.

Deacon Pascarella, associate to the vicar for clergy for permanent deacons for the Archdiocese of Philadelphia, shared his testimony about faith, family and the intersection of several passions and callings.

Prior to his appointment to his Archdiocesan post, Deacon Pascarella enjoyed a 35-year career in law enforcement. He has been married for more than 30 years and has twin sons.

Deacon Pascarella addressed such issues as: What happens when your career and your vocation seem to be pulling you in different directions? How can we make the best choices for ourselves and our loved ones when life presents us with a difficult crossroads? And what is God’s role in our journey?

In 2006 he entered St. Charles Borromeo Seminary, Philadelphia and was ordained a permanent deacon June 2, 2012 for the Archdiocese of Philadelphia.

“My careers with the Archdiocese and law enforcement overlapped, and neither one were planned,” Deacon Pascarella said.

“I’ve been at the altar serving one way or another since I was in fourth grade,” he said, including as an altar server, Eucharistic minister and cantor. Deacon Pascarella said he grew up in a traditional Catholic family and attended Mass each week; his father even drove the family through a blizzard to get to Christmas Day Mass in 1966. His parents taught their children devotions and took them to shrines. “They gave us a foundation for faith.”

Deacon Pascarella recalled a priest he knew well always said, “Always stay in a state of grace,” because you never know what day will be your last.

At one point Deacon Pascarella thought he wanted to be a priest. The thought crossed his mind again, but he decided he wanted to date and went to college.

His career goal at Temple was journalism, and while a student he worked part time for the National Center for State Courts, and later did research work for the Philadelphia Court of Common Pleas. Deacon Pascarella switched his major to criminal justice, and after college worked as a probation officer and was a member of the Fugitive Task Force.

Deacon Pascarella then went to work for the U.S. Probation Office, where he was advised to pick a specialty after six months to a year of working a general caseload. He found he really liked being an investigator in the penalty phase, investigating a defendant’s entire life to provide information that helped judges in their sentencing.

Deacon Pascarella noted he had started in journalism, and was now writing many reports, many of which went to the Third Circuit Court of Appeals and the Supreme Court. Two years ago he met Supreme Court Justice Samuel Alito when the justice was a speaker at St. Charles Borromeo. As they stood next to each other in the buffet line, Justice Alito recalled reading Deacon Pascarella’s reports, noting they were well done.

Deacon Pascarella said he was also thrilled to meet Pope Francis, explaining, “I was chaplain in 2015 when the Pope visited Philadelphia.”

Who else is on Deacon Pascarella’s wish list to meet? Billy Joel, who the deacon resembles. He recalled being at a Joel concert at Citizens Bank Park, Philadelphia, when people mistook him for the piano man, though Deacon Pascarella never said he was the singer.

Photos of him posing with people started appearing on Instagram, with people thinking he was the man they came to hear sing.

Deacon Pascarella retired from law enforcement in 2014 after 27 years of service.

“All this time I kept getting closer to the Lord. I’m a sinner like anyone else, but I’ve always had a strong faith,” he said, noting he has a special devotion to Our Lady of the Miraculous Medal.

It was in 1989 that Deacon Pascarella first saw a permanent deacon while he and his wife attended a Mass in Conshohocken. He researched information on permanent deacons but did not pursue the vocation.

Then his pastor at St. Lucy asked him to the Church Ministry Institute at St. Charles Borromeo, from which he graduated in 1992 but still said the permanent diaconate wasn’t for him. “My faith didn’t waver but I didn’t want to be part of it.”

Deacon Pascarella took the tests to join the FBI, but gave up the appointment because he didn’t want to move his family to New York. “I was at peace with it. I never regretted it, even though it was my dream job.”

Then 9/11 happened. Deacon Pascarella said one FBI agent who was also a volunteer firefighter – as is he – was killed in New York that day. “I believe in my heart had I taken that position I would have been in the South Tower that day. God didn’t want me there – God wanted me to do something else.”

When Deacon Pascarella received information on the permanent diaconate in 1998, he and his wife went to an information presentation, but he said it wasn’t for him.

During a July 1990 retreat at Malvern Retreat House, Deacon Pascarella woke early and went to Eucharistic adoration. “I think it was the first and only time I ever experienced contemplative prayer,” he said.

Before leaving he looked at the tabernacle and said, “Lord, when you want me to become a deacon, let me know.” A little while later a deacon there asked him about becoming a permanent deacon. But Deacon Pascarella still did not pursue it.

In 2005 Deacon Pascarella received unsolicited information about a presentation on the permanent diaconate. He and his wife attended. “I thought there was something different this time. I didn’t feel the way I did before.” His wife agreed he should apply.

While studying for the diaconate, Deacon Pascarella suffered from a severe infection from a seven-year-old uncompleted root canal. As he was undergoing tests, the technician’s voice sounded different as he heard her words, “Satan doesn’t want you to become a deacon, but Jesus Christ does and he will get you through this.”

Deacon Pascarella said the FBI arrests and prosecutes, but they don’t get to know about a person like he did in his probation work. “I got to see the whole person from birth – at one point in their life this criminal was an innocent baby. I looked at their whole life so the judge would know more about them than just their offense. These skills come in handy working for the Archdiocese.”

He recalled Jeremiah 1:5: “Before I formed you in the womb I knew you; before you came to birth I consecrated you.”

“God is using me to listen to God’s voice,” Deacon Pascarella said. “You’re here because God wants you here. You are unique. There’s something in this world that God wants you to do.”

“Each and every one of you here has a mission. Open your heart and mind to prayer. God keeps opening his plan. Keep your ears and heart open to listen to that plan.”

The next Theology on Tap, “Responding to Relativism” presented by Dr. Michael Rombiero, professor of philosophy at St. Charles Borromeo Seminary, Philadelphia, is slated for Monday, Jan. 14, 2019 at 7 p.m. at Hops at the Paddock.

Theology on Tap events are free of charge. Food and beverage can be ordered from the menu at the event site. For more information, click here or email Alexa Smith at asmith@allentowndiocese.org. 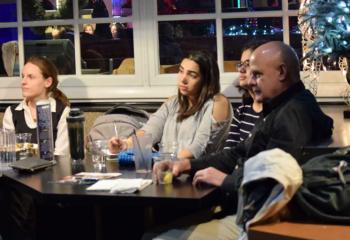 Young adults listen to Deacon Pascarella at the presentation sponsored by the Diocesan Office of Youth, Young Adult and Family Ministry. 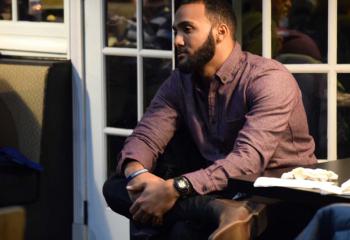 A participant reflects on a point made by Deacon Pascarella.