Thomas Flynn Retiring After 14 Years as President of Alvernia 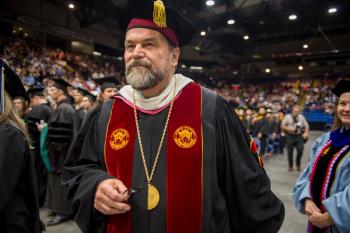 An important and successful chapter in the history of Alvernia University, Reading will draw to a close Sunday, June 30 with the retirement of Dr. Thomas Flynn, Alvernia’s longest-serving president who guided the college during 14 years of transformative leadership.

What are Flynn’s feelings on retirement?

“The writer of Ecclesiastes – and the Byrds in their famous song – said it right: “There’s a time for every purpose under heaven,” Flynn said.

“Alvernia is at a transition point with the completion of a 10-year, transformational strategic and campus master plan and two major fundraising campaigns. And after almost 20 years as a university president, 14 of them at Alvernia, I look forward to living life differently.

“Being president at Alvernia is the highlight of my career, and Helen and I will continue to enjoy our relationships with the sisters and members of the Alvernia and local community as we continue to call Reading our home.”

Flynn is Alvernia’s sixth president and a professor of English, having served at the helm of the university since 2005.
He has overseen the development of new strategic and campus master plans, and the campus-wide process of culminating in the achievement of university status. Under his leadership, Alvernia successfully completed “Values and Vision: The 50th Anniversary Campaign.

In addition to major capital projects and expanded support for faculty scholarship, endowed professorships and centers of excellence have been established, notably the O’Pake Institute for Ethics, Leadership and Public Service, and the Holleran Center for Community Engagement.

Highlights of Flynn’s tenure include Alvernia emerging as a national model for civic engagement and interfaith dialogue, led by two endowed centers – the Holleran Center for Community and Global Engagement and the O’Pake Institute for Ethics, Leadership and Public Service – and featuring the Reading Collegiate Scholars Program, which offers scholarships and support to Reading students.

Alvernia went from being a tiny, local commuter college to a comprehensive regional university, combining the benefits of a liberal arts college with many of the opportunities of a larger university, including the introduction of its first doctoral program, Doctor of Philosophy in Leadership, in 2006.

With Flynn at the helm, Alvernia College officially became Alvernia University in 2008. The school’s endowment doubled, and he led 14 years of balanced budgets and financial stability amid a turbulent environment.

“I am proudest of how the faculty and staff, students and trustees, put our mission as a Franciscan university in the proud tradition of Catholic higher education at the center of all we did and of all we have become,” Flynn said.

“Our Sponsorship Covenant with our wonderful Bernardine Sisters is considered a national model for Catholic universities. And our Holleran Center for Community and Global Engagement and O’Pake Institute for Ethics, Leadership and Public Service have led us to be recognized as a national model for community education, civic engagement, and interfaith dialogue.

“I so admire our students and alumni, who bring our mission alive, as they seek to be ‘ethical leaders with moral courage prepared to do well and to do good.”’

As for Flynn’s future plans, he will be a Senior Fellow for two national higher education associations.

“I will be the first person to serve in this capacity for the Association of Catholic Colleges and Universities, assisting our new director on initiatives focused on Catholic identity and religious sponsorship, and the preparation of future leaders for our 200-plus institutions,” he said.

“And I will join a team at the Association of Governing Boards, where we serve partly as a think tank and partly as consultants and advisors to boards and presidents in all of higher education.

“Locally, I will be serving as Vice Chair of the board for Caron Treatment Centers and continuing as a member of the boards for the Reading Hospital and Jesuit Center for Spiritual Growth in Wernersville, while continuing to work with religious leaders on interfaith issues.

“But there will also be ample time for travel and relaxing at the beach with family and friends.”

Previously Flynn served as senior advisor for the Council of Independent Colleges (CIC), where he led a national symposium on the relation between liberal arts education and professional leadership, and produced a report for educational, business and civic leaders. He also directed “President-Trustee Dialogues,” regional governance symposia that brought together over 150 presidents and trustee leaders.

Flynn also has served nine years at Millikin University, Decatur, Illinois, initially as provost and subsequently as president, and spent 14 years on the faculty of Mount St. Mary’s University, Emmitsburg, Maryland, where he was professor of English and Dean of the College.

Flynn has written and spoken extensively on contemporary higher education, and has been a consultant-evaluator for the National Endowment for the Humanities, the Lilly Endowment, and over 50 institutions. He serves on the Board of Directors of Caron, the Reading Health System, and the Jesuit Center for Spiritual Growth, Wernersville, and is active in interfaith dialogue and as a teacher in Alvernia’s Senior College.

Honored as an academic leader in 1992 by the National Center for the First Year Experience and in 2001 by the Council of Independent Colleges, he values most the Distinguished Teaching Award received in 1978 as a graduate teaching assistant at the University of Michigan and the Vision for Peace Award from Safe Berks in 2018.

A native of Boston, Massachusetts, Flynn earned his bachelor of arts degree in English at Boston College, and his master of arts and doctoral degrees in American culture from the University of Michigan. He is a graduate of Harvard University’s Institute of Educational Management and New Presidents’ Institute, and has spent a sabbatical in the President’s Office at Georgetown University.

Flynn is married to Helen Sheimo Flynn, a retired library director and fellow former Michigan graduate student. Their son Daniel is a development officer for the St. Vincent de Paul Society, and his wife, Anne, is a nurse practitioner working with the poor in Cincinnati. The Flynns share interests in music, reading, sports, travel and the beach. 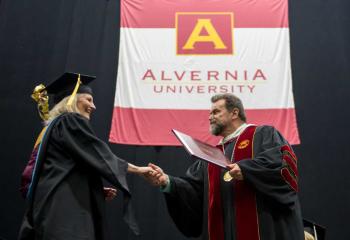 Flynn confers a diploma to an Alvernia student at the commencement, during which he was commencement speaker. (Photo credit Susan Angstadt and Alvernia University)