Theology on Tap Hears Personal Story ‘From Islam to Christ’ 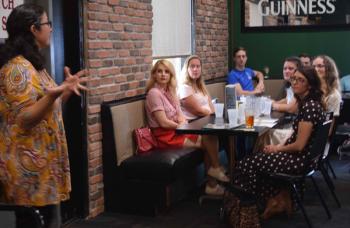 Derya Little, born and raised in Muslim Turkey, leads Theology on Tap at Hops at the Paddock, Allentown. (Photos by John Simitz)

When Derya Little was 11 years old she rejected her family’s Islamic faith after her parents’ divorce and set out to live an atheistic life – until she encountered the Catholic faith.

Little, born and raised in Muslim Turkey, shared her story about denouncing the strict Islamic faith and bouncing from atheism to the Protestant faith and then to Catholicism Aug. 12 with an estimated 20 young adults at Theology on Tap.

The informal discussion, “From Islam to Christ,” which also reflects the title of her book, was sponsored by the Office of Youth, Young Adult and Family Ministry at Hops at the Paddock, Allentown.

As a child, Little said she prayed five times a day and attended regular school in ordinary clothes. But come summer time, she donned an abaya and went to the local mosque to read the Qu-ran in Arabic.

“You could only get good points if you recited the Qu-ran in Arabic – which my brother and I did not speak. But Islam is passed on not by reading text but from what you learn from your father,” she said.

What she learned from her father was that he was engaged in extra-marital affairs – something not accepted by the faith but overlooked – and that he would abandon her mother for another woman.

“As a child, I wanted to play, eat candy and be happy. We played and rode our bikes. After my parents’ divorce, it shook the ground underneath me. I asked myself if their love was a lie, what other lies was I taught? It was the first time I started to question Islam,” she said.

She then began to read the Qu-ran in Turkish and quickly realized that Muhammad, the prophet of Islam, wasn’t the man she was taught.

“He created a religion to be a political system. There was so much violence. The violence Muhammad and his followers perpetrated was an appalling aspect of Islam that I was never taught. The elders and religious teachers always whitewashed the bloody details of Muhammad’s military ventures. All men strived to emulate him. As a woman, I was unable to be like him. I saw Islam for what it really is,” said Little.

“After I rejected Islam, I had nowhere to go. I thought Christianity was stupid and couldn’t believe people thought God was three persons. So I became atheist and I drank a lot and was very troubled.”

As a self-described “hard-core atheist,” Little took a job in college teaching an American woman to speak Turkish.

After learning the woman, named Therese, and her husband were in the country as Christian missionaries, she thought about turning down the job but eventually agreed for the money.

“This God she talked about was consistent, good, pure and her father. This God was bigger than science. In Islam, science doesn’t go there. Science is a way to box Allah in. But we talked a lot and argued a lot,” said Little.

She still didn’t want to accept the God Therese spoke about because if he was so good – why is there so much suffering in the world?

At the end of her second year in college, her Buddhist professor assigned a chapter titled “Grand Inquisitor” from Dostoyevsky’s “The Brothers Karamazov.”

“For the first time in my life, I came face to face with my own sinfulness. The sinfulness of my parents changed my life. My selfish and inconsiderate ways impacted many others,” said Little.

Months later, she started teaching another American family and became immersed in their Christian life.

“I saw something new. They demonstrated selfless love and served each other and their children. The children respected their parents and feared them, but that fear came from love. They did not want to disappoint their parents. Problems were solved together. It was beautiful to watch their daily life,” recalled Little.

Wanting to emulate their Christian life, she toiled over giving up a future government job, feared becoming a Christian would label her as a traitor in Turkey, and wondered what her fiancé and atheist friends would think.

Then one morning on her way to class, a scene of a little girl in a white dress playing with toys flashed in her mind.

“While she played, two hands reached down to offer her a gift. The wrapped gift glowed from within. It was obvious that its contents were precious beyond imagination. Then I realized that I was the little girl, and the precious gift was Christ’s sacrifice, offered that I might have eternal life. The light bulb finally came on,” said Little.

The next day, she told the Christian family that she wanted to become a Christian and together they prayed for her to accept Jesus.

“My life changed forever. I read the Bible, joined studies and started to meet other Turkish Christians. The more I learned, the more sense Christ’s sacrifice made,” said Little. 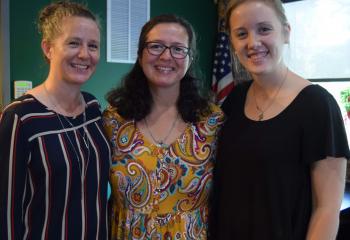 Little, center, is welcomed by Annie Sarlo, left, interim secretary of the Secretariat for Catholic Life and Evangelizaton, and Abby Lutz. 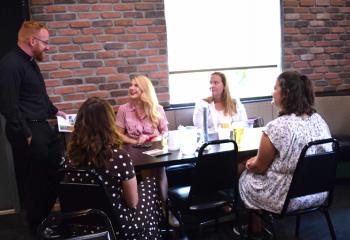 Father Mark Searles, left, director of the Diocesan Office for Vocations Promotion, chats with young adults during the break. 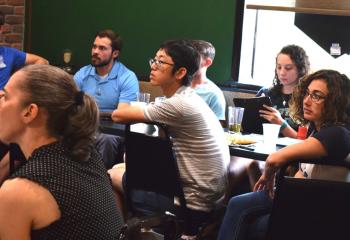 Young adults listen during the discussion “From Islam to Christ.”