Theology on Tap Gets to Know ‘The Life and Works of C.S. Lewis’ 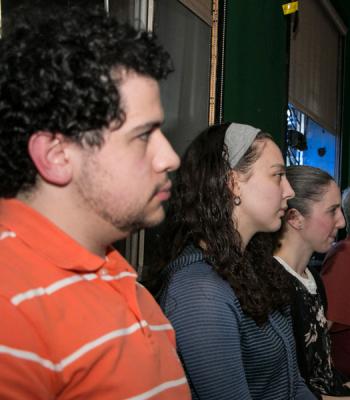 Young adults listen and participate in the discussion “The Life and Works of C.S. Lewis.” (Photos by Sue Braff)

“C.S. Lewis was an eccentric genius. His impact and influence continues to increase every day because he was different,” said Sister Sheila Galligan, theology professor at Immaculata University, Immaculata April 8 at Theology on Tap.

Sister Sheila led the discussion “The Life and Works of C.S. Lewis” with young adults at Hops at the Paddock, Allentown.
She opened the discussion by describing the British writer and lay theologian who called himself a “reluctant convert,” who never set out to be a Christian.

“He was really bothered by evil and suffering in the world that didn’t fit with whom he imagined God to be,” said Sister Sheila.

Some of his works include “The Screwtape Letters,” “The Chronicles of Narnia” and “The Space Trilogy,” and his nonfiction Christian apologetics include “Mere Christianity,” “Miracles” and “The Problem of Pain.”

“If he were here tonight, he would tell you to read ‘The Chronicles of Narnia,’” she told the young adults.

Although Lewis was baptized in the Christian faith in Belfast, Ireland, Sister Sheila said, he left the faith when his belief in God was shattered after the death of his mother, causing him to spend many years as an atheist. His father was unable to cope and enrolled him in a boarding school.”

Upon meeting J.R.R. Tolkien as a colleague at Oxford University, England, Lewis was influenced by his arguments and returned to Christianity “kicking, struggling, resentful and darting his eyes in every direction for a chance to escape” as he described in his book “Surprised by Joy.”

“He called God the ‘giant interferer’ who interrupted his life. He said God played chess with him, pursued him and got him,” said Sister Sheila.

After converting to Christianity in 1931, following a long discussion and late-night walk with Tolkien, he became a member of the Church of England – somewhat to the disappointment of Tolkien, who had hoped that he would join the Catholic Church.

“He was always seeking the truth. But most of all, he had an open heart and an open mind,” said Sister Sheila.

“He presented the Gospels without compromise. He didn’t want Christianity on the ‘rocks’ and served it ‘straight,’” she added.

Through his works, Sister Sheila told the young adults that he evokes a response and provokes action without coming on strong.

“He presents transcendental values – goodness, truth and beauty. He was a sensitive man and appreciated the beauty of nature,” she said.

In his writings, Sister Sheila pointed out that Lewis invites readers to ask existence questions like “who am I?” and “where am I going?”

She also said that Lewis strongly believed that if a person believes in heaven – they must enjoy life on earth.

“That’s why it is OK to enjoy a beer and a pizza here tonight. Pleasure is abound and should be part of your daily life,” stressed Sister Sheila.

Noting that his journey back to the faith was rocky, she suggested that the adults read his book “Letters to Malcolm: Chiefly on Prayer,” posthumously published in 1964. The book takes the form of a series of letters to a fictional friend, “Malcolm,” in which Lewis meditates on prayer as an intimate dialogue between man and God.

Often called a “romantic rationalist,” Sister Sheila said he was a man of reason and is able to help God break into other person’s lives through his writings.

“He incorporates the heart of St. Francis of Assisi and the mind of St. Thomas Aquinas,” she said.

The next Theology on Tap will be Monday, May 13, 7 p.m. at Hops at the Paddock, 1945 W. Columbia St., Allentown. Sister Geralyn Schmidt, Diocese of Harrisburg will present “Gender and God’s Plan for Humanity.” 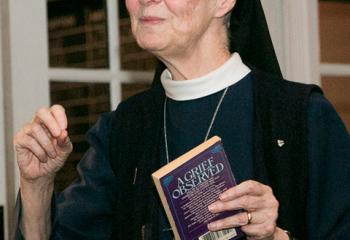 Sister Sheila Galligan, theology professor at Immaculata University, Immaculata leads the discussion for Theology on Tap at Hops at the Paddock, Allentown. 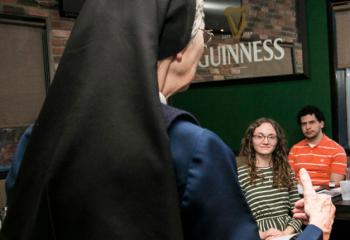 C.S. Lewis invites readers to ask existence questions like “who am I?” and “where am I going?” Sister Sheila tells the young adults.