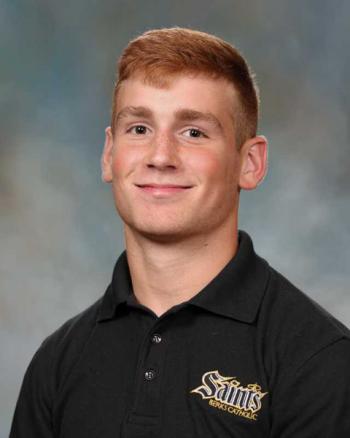 At age 16, Anthony Myers’ days should be filled with family, friends, playing football for Berks Catholic High School (BCHS), Reading and his studies as a sophomore. But life changed for Myers in late October when he was diagnosed with a stage three malignant brain tumor after suffering seizures.

The star football player at BCHS, a defensive back for the Saints, had a game-winning play one night and the next day suffered seizures that turned out to be a brain tumor.

His jersey number is 17. Some people made “17 Strong” T-shirts as a fundraiser. In a matter of days, the shirts started being sold at most other Diocesan high schools and some public schools.

The effort was spontaneous, not planned by school officials. It’s been on social media and on WFMZ Channel 69.

Dr. Brooke Tesche, deputy superintendent, secondary and special education with the Diocesan Secretariat for Catholic Education, and Jessica Edris, director of Catholic school marketing and enrollment, called it “a good example of people overcoming school rivalries to help a needy student with the costs of his operation.”

Team 17 Strong thanked Reddick and Jeffrey on Twitter at you can see those Tweets by clicking here and here.

Penn State football coach James Franklin – who played at East Stroudsburg University with Myer’s father Ed Myers in the 1992 and 1993 seasons – called to offer his support.

Balistrere said BCHS students, faculty and staff are wearing bracelets with Myers’ No. 17 to show their support. A parent donated the bracelets. Myers has always worn 17 as a tribute to his grandmother, who died in 2005.

Balistrere said Bishop Alfred Schlert offered intentions for Myers when he celebrated Mass at BCHS for All Saints Day. The Bishop met privately with Myers, his brother Nico and sister Gia after the liturgy. Nico, a senior, plays center for the Saints.

Team 17 Strong is comprised of a group of mothers, fathers, sisters, brothers, cousins, ministers, teachers, students, uncles, aunts and all in between who want to show love to the Myers family.

Their mission is to raise as much money as possible, to offset the medical and other expenses during Myers’ fight with cancer; 100 percent of the proceeds benefit the Myers family to cover expenses not covered by medical insurance that may occur with his care including  lodging, transportation, parking and meals.

T-shirts and soon other items are available for purchase on the Team 17 Strong website to raise money for the Myers family.

Myers in action on the football field as a defensive back for the Saints. 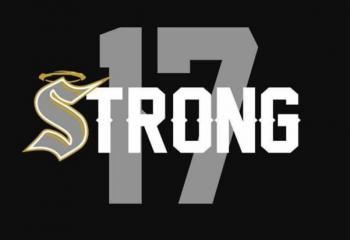