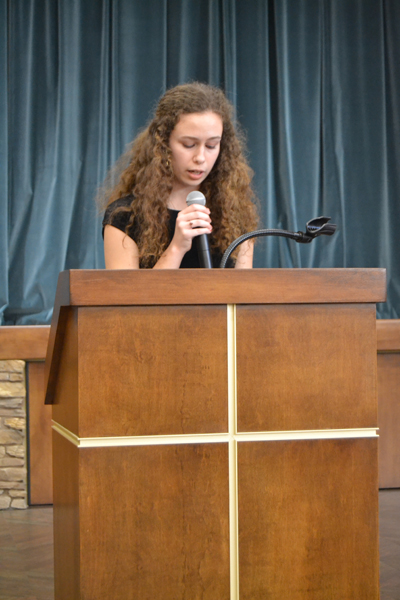 Over two hundred years ago, the United States was founded upon life, liberty and the pursuit of happiness. These are called our “basic rights,” rights that every American citizen is supposedly guaranteed.

Many arguments have been raised in our country since the historic signing of the Declaration of Independence, which laid out these principles. In modern society, much emphasis is placed on the rights of all, whether it be immigrants or refugees, yet many choose to ignore another group, the most vulnerable of all: the unborn.

Our country’s most basic rights are denied to those who cannot protest or argue like other targeted groups can. Society has come to believe that these rights are only for those who are “wanted” or “planned.”

The very nature of abortion destroys the values our founding fathers fought the Revolution to secure. The sacredness of life has been brushed aside in today’s society for the same reason other traditional values have: convenience.

Pope St. John Paul II’s appeal for the world to value life once again is a message needed and received all over the globe, now and always. As President Ronald Reagan once said on the subject, “I’ve noticed that everyone who is for abortion has already been born.”

Throughout his lifetime, Pope St. John Paul II was a major advocate and supporter of the world’s youth. On the subject of life, he once said, “together we may offer this world of ours new signs of hope, and work to ensure that justice and solidarity will increase and that a new culture of human life will be affirmed, for the building of an authentic civilization of truth and love.” He truly believed that the young could bond together to refocus society’s views on life.

As a Catholic, pro-life young woman growing up in the 2000s, my perspective on the pro-life movement is very interesting. My classmates and I discuss politics and yearn for the day we will be old enough to move mountains.

While we are still teenagers, I have no doubt it will be my generation that someday overturns Roe vs. Wade, despite not having been alive when it was created. We see the need for change and possess the passionate fire to actually change it. It will be through the words and actions of my peers and me that life will become sacred once again.

While there are still many supporters of abortion, polls show that millennials and those younger tend to be more pro-life than their parents. Two-thirds of participants of the yearly March for Life in Washington, D.C. are under 25 years old. Buses full of teenagers come from all over the country to walk in the bitter cold campaigning for those who cannot campaign for themselves.

America’s youth proclaiming the rallying cry “We are the pro-life generation” in our nation’s capital is one of the most empowering and hope-filling messages the movement can send, and I hope to join them someday.

Many of America’s other controversial issues try to push the abortion debate to the side, like the global warming debate or the feminist movement. I’ve been told that as a woman myself, supporting the pro-life movement is distinctly “anti-woman.”

What others seem to forget is that to truly be “pro-woman,” one needs to support all women. This includes both the mother and the child, no matter the situation. No exceptions, no loopholes.

Instead of allowing an innocent life to be taken, society should focus on supporting mothers considering abortion. In my opinion, women loving and supporting their fellow women would be the most empowering thing they could do.

Since 1973 and the passing of Roe vs. Wade, over 54 million unborn children have been killed – 54 million lives. Imagine if one of those 54 million who never were granted the right to life cured cancer, solved climate change or became an advocate for refugees. Society would be a different place with these humans that deserved the chance to try their hand in the world.

Even if none of the 54 million accomplished anything society would consider “noteworthy,” they still should have been given the ability to live, love and pursue whatever happiness meant to them.

Of the many injustices in our modern world, none is worse than the millions of unborn children killed through abortion. Pope St. John Paul II’s message of hope and inspiration is one all need to hear, but also need to act upon.

To create a society full of love and acceptance, we must work together to end this genocide. We must start by fixing this issue before moving onto others debated on in politics, because with the security of life comes the security of the future.

Go back to the story here.