St. Mary, Kutztown to Celebrate a Century of Nourishing the Faith 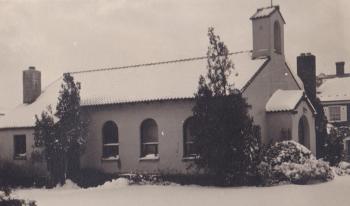 The church structure of St. Mary, Kutztown circa 1928.

Parishioners of St. Mary, Kutztown expanded their church structures, restored old structures and built new structures over their 100-year history – but their faith and devotion to God never needed any repair.

The parish will begin a yearlong celebration Sunday, Oct. 13 with a Mass celebrated by Bishop of Allentown Alfred Schlert, followed by a reception at Kutztown University.

The parish was founded by Archbishop of Philadelphia Dennis Joseph Dougherty in 1919 to meet the needs of students at Keystone State Normal School, which later became Kutztown University.

It was established Oct. 9, 1919 in East Penn Valley on Main Street in Kutztown. Mass was celebrated for the first time for the faithful on Christmas Day 1919.

Even though St. Mary was an official parish of the Archdiocese of Philadelphia, the parish did not secure a building. Most parish functions and celebrations were held at the home of Mary Miller at Whiteoak and West Walnut streets.

April 3, 1920 the parish purchased a parcel of land at 234 E. Main St. that became St. Mary. A few months later it purchased the adjacent lot as a rectory – where Masses were celebrated.

The parish was eventually able to build the Spanish-style mission church in Kutztown that served parishioners until 1994.

The church was dedicated Christmas Day 1928, and was officially dedicated by Bishop Gerald O’Hara June 9, 1929. Before its dedication, Mass had been celebrated in a bungalow home near Evansville. Nearby was an abandoned one-room schoolhouse, which was sold to the diocese and became St. Mary Chapel at Evansville.

In the 1930s St. Mary had its first recorded religious education program, provided by Missionary Sisters of the Sacred Heart of Jesus convent in Hyde Park. The sisters would teach at Evansville 1930-69 and at Kutztown 1936-73.

The church at Evansville was enlarged, with friends of the parish donating cement, steel and lumber. Construction was completed May 7, 1943.

Financial constraints prohibited building a separate church, and tearing down any of the existing structure was also deemed too costly. A new wing was added to the mission-style church to allow more seating during Mass. The addition was dedicated Oct. 31, 1948.

In 1961 the Diocese of Allentown was created, with Joseph McShea being named its first bishop.

In 1969 the diocese purchased a private home on campus to become the Christopher House Neumann Apostolate.

St. Mary completed a major building project, which saw the construction of an education building and parish hall behind the church.

The parish continued to grow, and the existing church buildings were not adequate to accommodate the congregation. New property was purchased in Richmond Township, and a new church was built and dedicated Oct. 8, 1994, the 75th anniversary of the parish.

The faithful are invited to observe the anniversary on Oct. 13 at 11 a.m. The reception will begin at 1 p.m.

Tickets for the reception are available in the church after all Masses: $20 for adults, $15 for ages 14-18, $10 for ages 3-13. Entrees are chicken marsala, beef roast with shallot sauce and vegetarian lasagna. 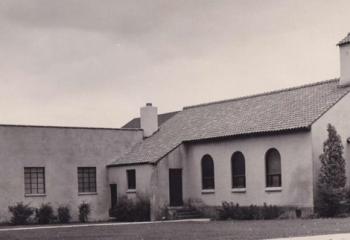 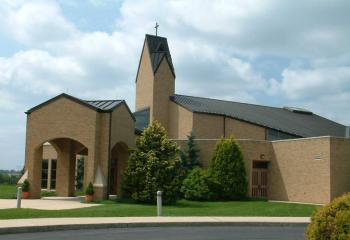