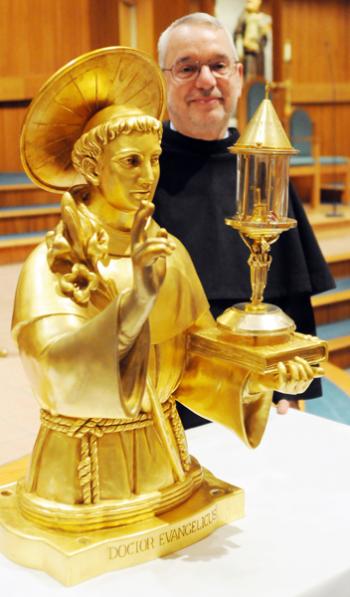 Father Mario Conte from the Basilica of St. Anthony, Padua, Italy stands near a first class relic of a fragment of skin of St. Anthony at St. Anthony of Padua Church, Easton. (Photo by Ed Koskey)

A tour of relics from one of the most quickly canonized saints stopped Oct. 11 in the Diocese of Allentown to be venerated by hundreds of faithful at the Cathedral of St. Catharine of Siena, Allentown and St. Anthony of Padua, Easton.

Father Mario Conte, from the Basilica of St. Anthony of Padua, Italy and executive editor of the Messenger of Saint Anthony magazine, has been travelling since June with two first class relics of the Portuguese Catholic priest and friar.

After visiting Australia and Canada, Father Conte is touring the U.S. East Coast to bring “everybody’s friend” to the faithful.

With an estimated 5 million faithful visiting the basilica to honor the saint – widely known as the patron saint of lost items – Father Conte said he consistently makes the effort to ask faithful why they offer devotions to him.

“The people give me the same simple answer,” he said. “They tell me, ‘Anthony is our friend.’”

The two relics on tour are fragments of St. Anthony’s skin and a fragment of a floating rib of the saint that were obtained from the remains of the saint after his tomb was exhumed and opened in 1981.

Father Conte, who was a young friar at the time, was present for the second opening of the casket that was divided into four compartments containing a skull, a red cape, bones and other human parts.

The tomb was opened for the first time in 1263, when his body was moved to a new shrine. Experts discovered that the body was decaying except for the vocal apparatus.
“His tongue was still soft and red and his jaw did not decay. They are the two major relics on display at the Basilica,” said Father Conte.

“In 1981, experts believed in his humility and wanted to see what was inside. Pathologists examined the remains and found that he was a tall man for his time, his kneecaps were accustomed to kneeling and his feet were accustomed to walking thousands of miles,” he said.

During the 1981 exhumation, flesh from his face and a partial rib were retrieved and became relics that frequently travel abroad and around the world.

The floating rib relic became even more precious to Father Conte and faithful around the world when it was used by Pope Francis, then-Archbishop Bergoglio, in 2000 to bless the faithful after Mass at the Metropolitan Cathedral in Buenos Aires, Argentina.

The same reliquary had been kissed five years earlier by Sister Lucia of Fatima when it was taken to the nuns at the Monastery of Carmelite sisters in Coimbra, Portugal, in January 1995, during the commemorations for the 800th anniversary of the saint’s birth.

When he is not on tour with the relics, Father Conte said he listens to stories from the faithful visiting the basilica.

“Most of the time their devotion to St. Anthony is something that was passed down through the family. There is always a strong event that happened,” he said.

For instance, Father Conte recalled a visitor telling him about his grandfather who was a prisoner in a consecration camp during World War II.

“His grandfather implored St. Anthony to bring him back to his family. One day, the guards weren’t looking and he walked out of the gate. He walked hundreds of kilometers – without anyone stopping him – and surprised his family when he walked through the door of his home,” he said.

Father Conte listens to stories about the saint almost every day, and although the stories are about different people and circumstances, he said there is always one common detail.
“Most people tell me that he is a friend to them because whenever they have a problem – he is there listening to their prayers,” he said.

He is noted by his contemporaries for his powerful preaching, expert knowledge of Scripture, and undying love and devotion to the poor and the sick. 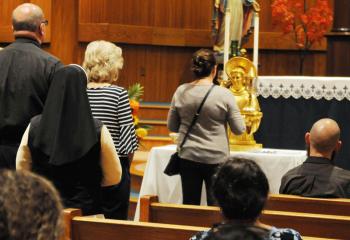 Faithful venerate one of the relics of the Portuguese Catholic priest at St. Anthony of Padua, Easton. (Photo by Ed Koskey) 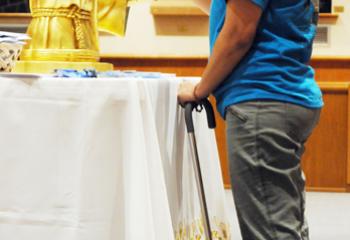 Estefania Perdomo touches and prays before a first class relic of St. Anthony of Padua at St. Anthony in Easton. (Photo by Ed Koskey) 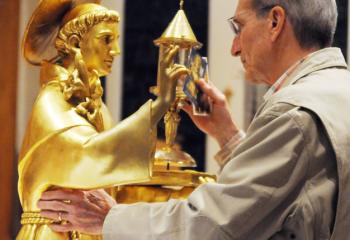 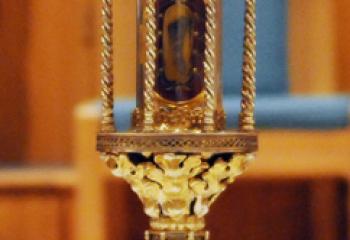 A piece of a rib of St. Anthony is on display at St. Anthony of Padua, Easton as part of the U.S. tour of the saint’s relics. (Photo by Ed Koskey) 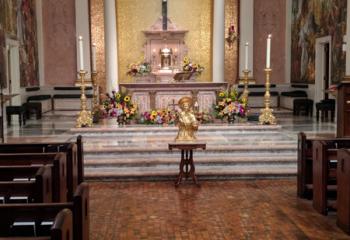 A relic of St. Anthony of Padua is on display at the Cathedral of St. Catharine of Siena, Allentown. (Photo courtesy of Rick Dooley)