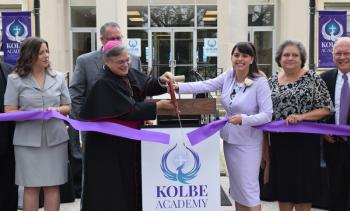 The Diocese’s Department of Catholic Education worked with the School Sisters of St. Francis to open the high school in Mullen Hall, site of the former St. Francis Academy.

Students are already enrolled at Kolbe, which welcomes students in need from all faiths from all five counties of the Diocese: Berks, Carbon, Lehigh, Northampton, Schuylkill and beyond.

Sister Bonnie welcomed the more than 100 people who attended the grand opening, telling them she is a 1974 graduate of St. Francis Academy in the school building that now houses Kolbe Academy.

She said that on her graduation day she never imagined she’d be standing in front of the building 45 years later at the opening of the first Catholic recovery school in the nation.

Kolbe Academy – which carries the tagline “Recover, Succeed, Transform” – is the brainchild of Tesche.

“We are called to be that place – that light of Christ,” Bishop Schlert said. He said the school was appropriately named after St. Maximilian Kolbe, the patron saint of people struggling with addiction. “He gave his life for others at Auschwitz. His personal story is one of persistence and embracing the love of Jesus Christ.

“As students walk these halls on their journey forward, may they experience the love of the Lord, inspired by Maximilian Kolbe.”

The Bishop thanked all who brought the school to fruition, including School Sisters of St. Francis, the board, faculty, staff, administration, volunteers, Tesche, Petruzzelli and community partners. He also read a message from Pope Francis, and prayed a blessing for the school before presiding at the ribbon cutting.

“What a glorious morning on many levels for all of you,” said Ehrlich. She spoke representing James Carroll, director of the U.S. Office of National Drug Control Policy.

“This administration views the disease of addiction as a total priority – we are losing way too many lives,” Ehrlich said. “Faith is so important in the recovery process. What I love about this academy is it begins to break away the stigma of this disease.”

As DiDomenico addressed those gathered under sun and clouds, she said, “There is hope despite how horrific addiction can be.” She noted Kolbe is the first such Catholic affiliated school in Pennsylvania, and the second such school in the Commonwealth.

“With support of high schools such as this we see an individual wrapped in care and love that leads to success.”

DiDomenico also referred to a quote by Robert F. Kennedy from an address in Cape Town, South Africa in 1966: “Few will have the greatness to bend history itself, but each of us can work to change a small portion of events.”
McClure said a fundamental tenet of his office is “no citizen is left behind.”

“Science tells us faith helps us get into recovery and stay in recovery,” said McClure, who presented Tesche with a certificate of achievement.

“We are honored to be part of the recovery effort in this county,” said Tesche.

“It takes a community of faith to come together to do something like this, something that’s never been done before,” said Tesche, who expressed deep gratitude to all involved, including the Bishop, and for the support of her husband.

“We stand to build solutions,” Tesche said. “Together we’ve created a dynamic opportunity for students and their families struggling with substance abuse.”

Petruzzelli also thanked the Bishop and everyone involved, and said he was “overwhelmed by the support of all those who are here and those who are not here.”

Petruzzelli said he “hit the jackpot” with the people who comprise Kolbe’s board and staff, and, as he thanked Tesche for “asking me to be involved with her vision,” calling her “a true trailblazer.”

Metzger said he was really proud he accepted his position, and has learned a lot this past year from Tesche, Petruzzelli and board members. “Through this process what I admire most is their belief in hope.”

“We are blessed with this opportunity,” said Coppola, who lost his son to addiction. He said he felt it was one of those “God moments” that led him to be a part of Kolbe.

“I’m proud to celebrate the spirit and reality of Kolbe Academy,” said Coppola, who personally dedicated the school to his son. “I imagine he is smiling at the work of so many.”

Russo said she was there because she loves education, the Lehigh Valley and is Catholic. “I’m also the child of an alcoholic in successful recovery for 37 years.”

The ceremony concluded with a performance by Matt Butler, a folk artist, rock ’n’ roller and storyteller who was honored as a 2017 Leader in Mental Health Awareness by the National Alliance on Mental Illness.

Butler’s newly formed Just One Foundation is a 501(c)(3) non-profit organization that brings music with the message of recovery to communities most in need. Performances have been brought to treatment facilities, community centers, schools, public demonstrations, as well as jails and prisons.

The event wrapped up with refreshments and tours. 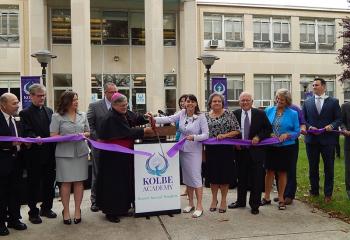 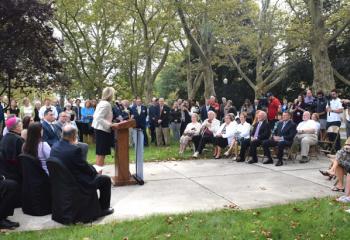 Those gathered listen to Kendall Ehrlich speak during the morning ceremony. 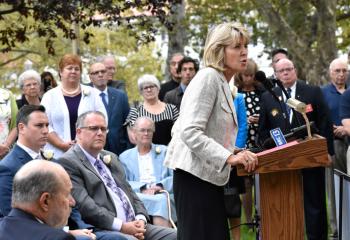 “Faith is so important in the recovery process. What I love about this academy is it begins to break away the stigma of this disease,” Kendall Ehrlich tells those gathered. 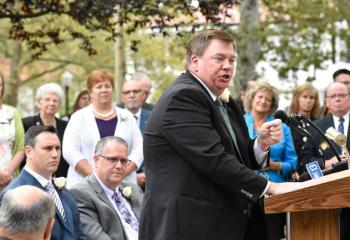 “Science tells us faith helps us get into recovery and stay in recovery,” Lamont McClure tells the crowd. 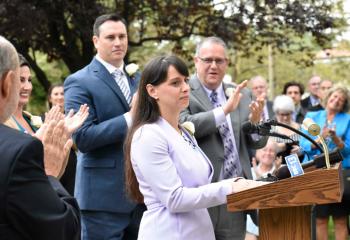 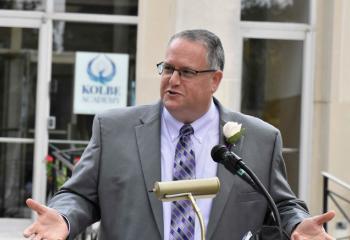 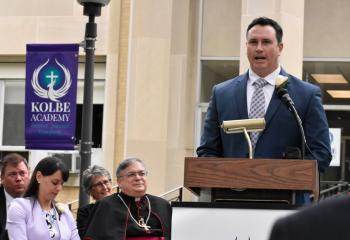 Listening to Michael Metzger speak are, from left, Lamont McClure, Brooke Tesche, Sister Bonnie Kleinschuster and Bishop Alfred Schlert. Metzger said he learned a lot this past year from Tesche, Petruzzelli and board members, and said, “Through this process what I admire most is their belief in hope.” 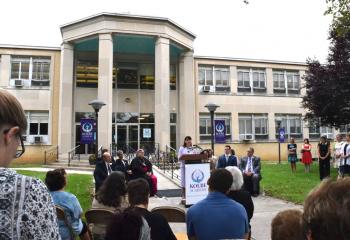 “We’re here because we need a recovery high school – that is a scary reality,” Brooke Tesche tells those gathered with the school entrance behind her. 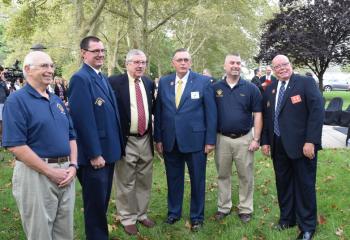 Members of the Knights of Columbus attend the ceremony. Some knights helped paint the school at various times. 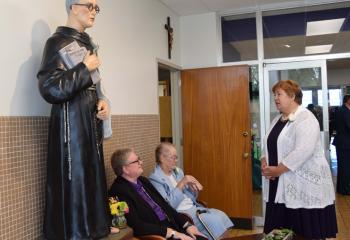 The statue of St. Maximilian Kolbe in a hallway of the school. At left is Alexandria Cirko, assistant superintendent of religious education with the Diocesan Secretariat for Catholic Education. 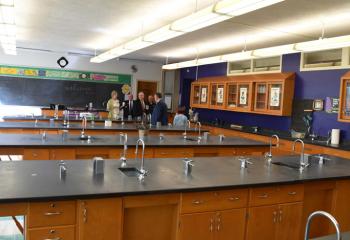 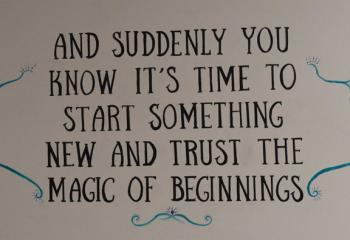