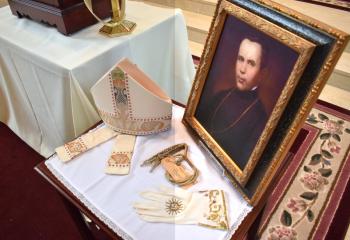 A portrait of St. John Neumann on display along with his miter and gloves at St. Patrick, Pottsville. (Photos by John Simitz)

Relics of the fourth bishop of the Archdiocese of Philadelphia were venerated May 22 at St. Patrick, Pottsville – the same town that he longed to see become the seat of a new diocese.

The relics on display in a reliquary included a first-class relic identified as a portion of his backbone.

Second-class relics were a ciborium he used to distribute the sacrament, a leather-bound book containing the New Testament in Greek, a photo of him as a little boy, a catechism he wrote for children in German and wood from his original casket.

One of his miters and a set of gloves were also part of the display.

Father Michalik presented two talks on the saint, who came to America in 1836 with the hopes of being ordained after the local bishop cancelled priest ordinations due to an over flux of priests and nowhere to place them in ministry.

“Could you imagine the cancellation of ordination of priests in today’s world?” said Father Michalik.

“He had a great desire to be a missionary to immigrants that were on the rise in American.”

A brilliant man dedicated to his studies, Father Michalik said it took the future priest 40 days to cross the ocean before arriving in New York, where the sitting bishop immediately ordained him.

After his ordination, Father Michalik said, he was sent to the Niagara region of New York, where he traveled by horseback through forests and snow to minister to immigrants residing in remote cabins.

In 1842 he joined the Redemptorist community of priests and caught the attention of Pope Pius IX, who appointed him the Bishop of Philadelphia – which included the future Diocese of Allentown – in 1852.

“He didn’t want to be bishop, but his holiness, brilliance and pastoral care couldn’t be hidden,” said Father Michalik, who is also a Redemptorist priest.

As bishop, he served the then “Diocese” of Philadelphia that included the eastern half of Pennsylvania, all of Delaware and most of New Jersey.

Bishop Neumann devoted his office as bishop to building churches, schools and asylums for his diocese. He was devoted to education and was the first ecclesiastic to organize a diocesan school system in the United States.

“As Bishop of Philadelphia, he was loved, but high society of Philadelphia did not like the idea of a short foreigner as their shepherd. He didn’t like sophisticated society, but soon they realized what a prince they had,” said Father Michalik.

“The only thing he wanted to do as a priest here in America, was to minister to and be present to the needs of the peoples he came to serve. He was most happy when he was intimately involved in the everyday struggles, fears, anxieties and real challenges of human life,” he said.

Father Michalik said his greatest fear was not being able to serve such a large diocese and suggested splitting the diocese and forming the Diocese of Pottsville.

“Pottsville figured quite prominently in his vision as bishop. His personal desire was to leave Philadelphia and be right here.I am sure this beautiful area and mountains reminded him of his home. The high society of Philadelphia was not where he wanted to be. He was hoping to be transferred to this region,” he said.

“Unfortunately, it didn’t come to pass and he traveled endlessly because of his intense love for his people,” said Father Michalik.

According to Father Michalik, Bishop Neumann had a strong desire to introduce 40 Hours of Devotion to the diocese but feared retribution in a culture that was anti-Catholic. While praying at his desk, he fell asleep and a candle ignited all the papers on the desk – except for documents describing 40 Hours of Devotion.

“He took that as a sign from God and we now have the beautiful devotion,” he said.

Father Michalik also said Bishop Neumann went above and beyond pastoral work in his short life and is known today as a very powerful miracle worker.

“St. John Neumann is a great saint and very much present today in the lives of people who reach out to him. He is a powerful intercessor before God,” he said.

“You are allowing St. John Neumann to do what he did on earth – to come visit his people. He continues to minister to you – his people – through miraculous intercession. You invited him and he would never refuse an invitation. He is here today in a very unique and powerful way. He wanted to be here as your bishop. You invited him and he has come to minister to your needs.”

Bishop Neumann died Jan. 5, 1860 after collapsing on a Philadelphia street while running errands.

He was declared venerable by Pope Benedict XV in 1921. He was beatified by Pope Paul VI during the Second Vatican Council on Oct. 13, 1963 and was canonized by that same pope on June 19, 1977. 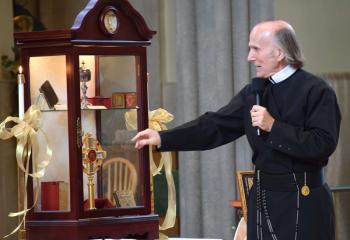 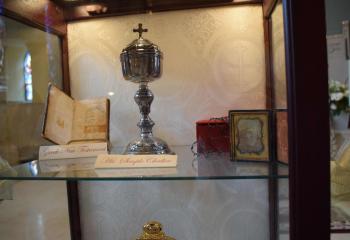 The reliquary containing the chalice of Bishop Neumann, fourth bishop of Philadelphia, also displays his copy of the New Testament written in Greek. 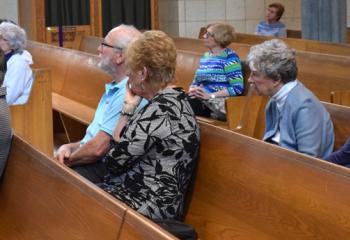 Faithful gather at St. Patrick to learn more about the life of St. John Neumann. 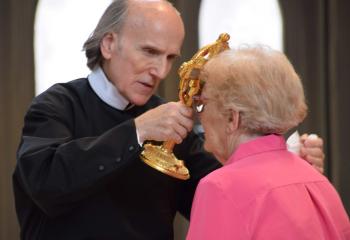 Father Michalik assists a member of the faith in venerating a relic of St. John Neumann. 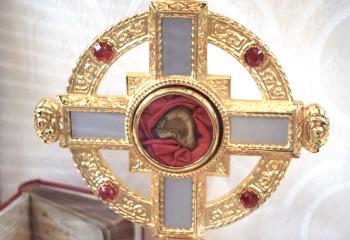 A fragment of St. John Neumann’s back bone was part of the relics on display and for veneration.