In Private Pilgrimage to the National Shrine, Bishop Remembers the Intentions of All Catholics in the Diocese 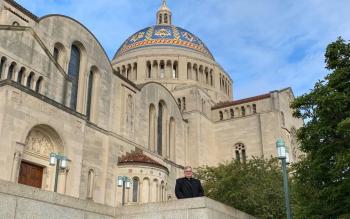 Making a private pilgrimage on behalf of everyone in the Diocese of Allentown, Bishop Alfred Schlert visited the National Shrine in Washington, D.C., Thursday, Oct. 7.

He made the trip on what was going to be the date of the Diocesan Pilgrimage to the Shrine as part of the Year of the Real Presence. Planning was well underway in parishes and schools before COVID restrictions at the Shrine forced the event to be postponed.

Bishop Schlert remembered the intentions of Catholics throughout the Diocese as he spent time in Adoration before the Blessed Sacrament, and as he celebrated Mass privately on one of the Shrine’s side altars.

Bishop Schlert also spent time at the Shrine in prayer at several of the other chapels, in particular ones dedicated to the Blessed Mother.

“I thought it important, given the postponement of our public pilgrimage, to at least go privately to our Blessed Mother to bring the gratitude and intentions of the faithful in our Diocese during our 60th Jubilee Year,” Bishop Schlert said.

Formally known as the National Shrine of the Immaculate Conception, it is the largest Roman Catholic Church in North America and one of the ten largest churches in the world.

The Basilica is designated by the United States Conference of Catholic Bishops as a National Sanctuary of Prayer and Pilgrimage and is dedicated to the patroness of the United States, the Blessed Virgin Mary under her title of the Immaculate Conception.

There are more than 80 chapels and oratories that honor the Mother of God and represent the peoples, cultures, and traditions of Catholics around the nation. It has been referred to as America’s Catholic Church.

The National Shrine receives nearly one million visitors annually and has been visited by Pope Francis, Pope Benedict XVI, Saint Pope John Paul II, and Saint Mother Teresa of Calcutta, among others.

The Diocesan Pilgrimage has been rescheduled for October 6, 2022. Watch for more information in AD Today and the AD Times, and on the Year of Real Presence website.