Priest Shares Stories of Working With St. Teresa of Calcutta 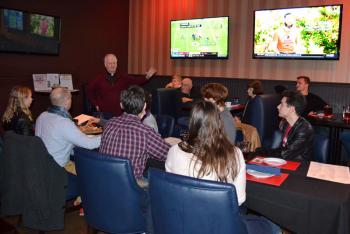 Msgr. Michael Mannion shares his memories of Mother Teresa during the Nov. 10 Theology on Tap event at the Corked Wine Bar in Bethlehem. (Photos by Alexa Doncsecz)

By ALEXA DONCSECZ Special to The A.D. Times

“What are the first words that come to your mind when you hear the name Mother Teresa?” Msgr. Michael Mannion posed this question to approximately 30 young adults at the Nov. 20 Theology on Tap event at Corked Wine Bar, Bethlehem.

Msgr. Mannion, a priest of the Diocese of Camden, New Jersey, shared memories of time spent with the now saint as he presented the topic “Working Beside a Saint: Stories of St. Teresa of Calcutta.”

In response to Msgr. Mannion’s question, young adults shared words such as “humility,” “selflessness” and “love.” For each new word proposed by a member of the audience, Msgr. Mannion shared a story from his work with St. Teresa in which she exhibited that value.

“She was 4’11”; Time Magazine said she was the most powerful woman in the world. She never knew how to shoot a gun, never committed an act of violence – how did she make peace?” Msgr. Mannion asked. “She prayed and she was stubborn, in that order.”

When Msgr. Mannion first met Mother Teresa, he was volunteering as a student in a Prenestina, a poor area of Rome, in the 1960s and ’70s. The locals suggested he meet the Indian sisters who were serving there, so he did. It wasn’t long after that one of the sisters, Sister Victoria, told him that their Mother Superior was coming to Rome and needed to be picked up.

“I knocked on Bishop Hickey’s door and asked, ‘Bishop, can I borrow your car tomorrow? I need to pick up some nun at the airport.’ So I borrowed his car and picked up Mother Teresa.”

When they arrived at the convent in another poor section of Rome, Mother Teresa told Msgr. Mannion that they needed a priest to celebrate Mass the next day. He told her he was not yet ordained.

“She said, ‘Can you get us a priest?’ So I knocked on the bishop’s door again and said to him, ‘I need your car again, but this time I need you in it, to go say Mass for these sisters and their superior, Mother Teresa.’”

“They really hit it off,” Msgr. Mannion went on. “And later when Bishop Hickey became the Archbishop Cardinal of Washington, he made sure there were five or six homes for Mother Teresa in his archdiocese. These were homes for the homeless, for unwed mothers, contemplative homes for prayer.

At the time of Msgr. Mannion’s ordination, Mother Teresa sent him a picture. On the back of it she wrote, “Be only all for Jesus, through Mary. Be a holy priest.” This was a rare and special gift because she almost never allowed her picture to be taken.

“Every time someone took her picture she said Jesus had to bring a soul into Heaven,” Msgr. Mannion added.

After he became a priest, Msgr. Mannion felt called to serve the poor and reached out to Mother Teresa to ask if he could join her in her missionary work. She advised him not to come, saying that Americans were being killed on the streets.

Msgr. Mannion went to Calcutta thinking he could dig ditches, but they asked him to work with lepers.

Msgr. Mannion would give shots to the lepers and clean their wounds, showing them a bit of love and kindness.

“I remember my first time giving shots, and causing tremendous pain as I tried to find the right vein in such small arms,” Msgr. Mannion reflected. “But then I got to see that person recover. As time went on, I had less compassion for the pain and more commitment to the life.

“If I let too much emotional compassion get in the way, by the time I got the needle in, that little child would be dead. The price of the pain was the survival of the child.

“Sometimes in life we go through pain, but often the place of the wound is the place of healing. Sometimes you have to take a person back into their pain and talk about the pain, and it’s only after this that they’re able to truly heal.

“Mother had a habit when someone was dying. She would hold their face in her hands and she would tell them ‘When you see Jesus, tell him I love you. Tell him that we prayed with you.’

Msgr. Mannion shared that as one man was dying he told Mother Teresa, “I’ve lived as an animal, but I died as a human being.”

“Mother was someone who had God’s gift to comfort the afflicted, and to afflict us if we got too comfortable – always with a heart of love,” Msgr. Mannion said. “She believed that by the grace of Christ, everyone could do what she was doing, and that everyone has a way to serve the poor.

“It may not always be a financial poverty. Sometimes it is a spiritual poverty.”

Msgr. Mannion described Mother’s outreach to women who had received abortions, and how she would carry around religious medals to give them after praying with them.

“She went through a dark night of the soul,” he said. “If you read any of the mystics – John of the Cross, Therese of Lisieux – seeking an intimate closeness to God challenges us in a deep and profound way, but also introduces us to a lot of struggles.

“How do you most identify with Christ? Mother sought to identify with Christ in the cross. God blessed her with identification with the crucified Christ, and that meant some deep struggles. Ultimately it led her to a deeper experience of Christ that was not unlike the great mystics.

“Whenever something happens to us, it makes us either bitter or better; they learn how to use your wound as a gift, and that is part of the secret of Mother Teresa.”

Msgr. Mannion was in Washington the day Mother Teresa died, Sept. 5, 1997, at age 87. He described it as a very sad morning.

He ended his presentation on a note of encouragement, challenging the young adults to go out and contribute to the world according to God’s plan for their lives.

“You have a gift that Mother didn’t have, and she had a gift that you don’t have. She understood that the body of Christ is a mosaic with many different colors and shapes of glass,” he explained.

“I pray that something of this story tonight motivates you to want to do something beautiful for God.” 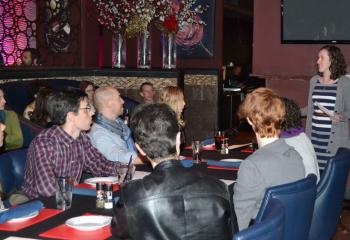 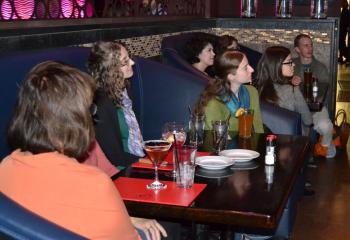 Young adults listen to Msgr. Mannion’s reflections about Mother Teresa and her service. 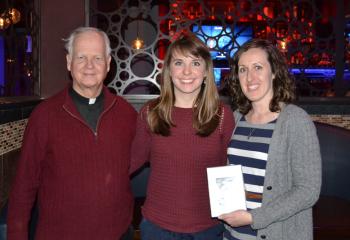