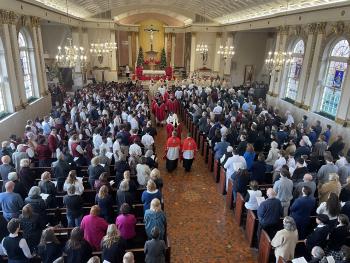 The pews were filled at the 12:15 p.m. Mass at the Cathedral of St. Catharine of Siena to pay tribute to Pope Emeritus Benedict, who died December 31.

In addition to the dozens of diocesan priests who concelebrated, also in attendance were deacons, seminarians, teachers, Catholic school students, consecrated religious, and faithful from far and wide in the five-county Diocese.

The Mass was held on the same day as Pope Benedict’s funeral Mass in Rome, at which Pope Francis – along with millions of the faithful in person and watching around the world – thanked the Lord for the gift of Pope Benedict and prayed for his eternal rest.

On Wednesday evening, Bishop Schlert celebrated Solemn Vespers with the Office of the Dead at the Cathedral. “We come together tonight to pray for a faithful soul, and commend him to God, that He might receive his soul, that He might grant him eternal rest, that He might pardon his sins, and give him a merciful judgement.”

Bishop Schlert said the evening prayers – in this case for a pope – should give everyone hope, because “in reality the Church prays this for every soul. One day the Church will pray this way for us. The loving arms of the Church extend to every precious soul.”

Cardinal Joseph Ratzinger, born in Bavaria, Germany, became the 264th successor of St. Peter in April 2005 at the age of 78. He was the first pope in almost 600 years to resign, when he stepped down from the papacy in 2013. At the time of his death, in his residence at a Vatican monastery, he was 95. He had been a priest for 71 years.

Here is a link to a special resource webpage about Pope Emeritus Benedict XVI, including his biography, coat of arms, quick facts, and photos, along with selected quotes and links to his Encyclicals.

In addition, here are prayer cards for your use, in English and in Spanish.

“If we allow the love of Christ to change our heart, then we can change the world. This is the secret of authentic happiness.” — Pope Benedict XVI, on his Apostolic Journey to Mexico and Cuba in March 2012.