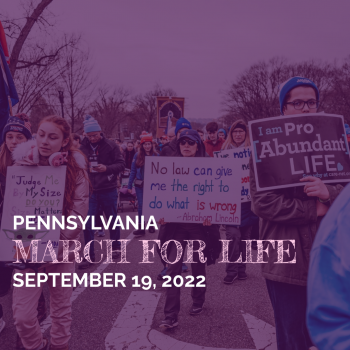 Busloads of students from diocesan high schools will head to Harrisburg on Monday, Sept. 19 for the Pennsylvania March for Life.

The day will begin when the buses first stop at St. Mary Parish in Hamburg for a 9 a.m. Mass celebrated by Bishop Alfred Schlert. Later, there will be a rally at the Capitol, followed by the March.

The event is a good opportunity for students to help influence legislators and public officials to protect life by voicing their support for banning abortion in the state.

This year’s March comes at a crucial time: The U.S. Supreme Court overturned Roe v. Wade, and now each state must decide abortion policy. Abortion remains legal in Pennsylvania and is supported by a very strong group of legislators and advocates, and by many citizens of the state.

Two key abortion issues are on the docket in Harrisburg: The Pennsylvania Supreme Court is considering a lawsuit filed by abortion advocates that calls for state funding of abortion through Medicaid. At the same time, state Republicans are pushing a Constitutional amendment that could eventually make it possible to restrict or ban abortion in the state.

Parishioners from around the Diocese also are invited to attend the rally and March in Harrisburg. For more information or to register, visit https://marchforlife.org/pennsylvania-march-for-life/