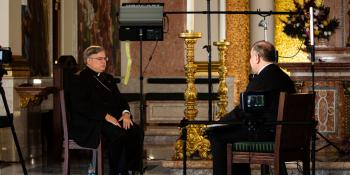 A new documentary on the history of the Diocese of Allentown and its current shepherd, Bishop Alfred Schlert, has arrived just in time to help celebrate the Diocese’s 60th anniversary year.

Allentown is one of more than 90 dioceses nationwide profiled by “The Chair: An Exploration of What it Means to be an Apostle in America.” The series eventually will be available on Amazon Prime, Google Play, and iTunes/Apple TV.

It includes a compelling interview with Bishop Schlert, who reflects on leading the Diocese where he was born and raised, and on his call to the priesthood while in 10th grade. He also tells the heartwarming story of the unexpected phone call in which he learned he was to become the Diocese’s Fifth Bishop.

“My whole vocation developed in here,” he says, seated in the Cathedral for the interview. The only thing that really changed, he says, was his seat. He has sat in the main pews as a student, and in the side pews as a seminarian, and in the center pews as a diocesan priest, and now sits in the Cathedra to the left of the main altar. “The view from each seat was different,” he says, “not only architecturally, but vocationally as well.”

Bishop Schlert also reflects on the moment when he was ordained a Bishop in the Cathedral, on Aug. 31, 2017. “It’s so moving when the Book of the Gospels is placed over your head and the Chrism is poured on your head,” he says, “and you just feel the role of a successor of the Apostles.”

The documentary features interviews with experts – a professor of religious studies at St. Francis College, a history professor at Seton Hall University, and a liturgical art expert – about the Diocese and about the post-Modern architecture and Italian-influenced interior of the Cathedral.

The film traces the history Catholicism in our diocese, from the time Jesuit missionaries arrived in the 1600s, to the transformation of its Germanic and agrarian culture into a multi-ethnic melting pot of immigrants arriving to work in factories, to its economic decline when that industry faded, and to its economic rebirth fueled by service businesses, health care and higher education.

As the Diocese celebrates its 60th year since it was separated from the Archdiocese of Philadelphia, it also marks the Year of the Real Presence, a special time in parishes and schools around the Diocese that celebrates the Real Presence of Jesus Christ in the Holy Eucharist and enables parishioners to rejoice in the gift of being present with their brothers, sisters, and clergy at Mass.

For more on the Year of the Real Presence, visit www.YearOfRealPresence.org. The documentary is available for viewing on that website, at this link.