Men’s Conference Beckons Them to ‘Spiritual Combat: Armed with the Spirit’ 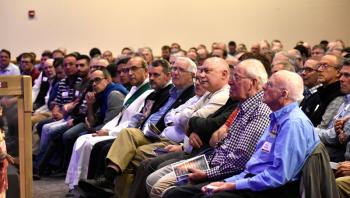 “Men face challenges that previous generations did not face. We are watching our culture slowly deconstruct,” said Patrick Coffin, Nov. 3 to an estimated 600 men at the Diocesan Men’s Conference “Spiritual Combat: Armed with the Spirit,” at DeSales University, Center Valley.

Coffin, the host of “The Patrick Coffin Show,” an independent, listener supported podcast that features weekly interviews with A-list influencers and outliers in the effort to recover the Judeo-Christian roots of the culture, was one of the keynote speakers at the conference.

Other keynote speakers included Father Stephen DeLacy, director of the Vocations Office for the Archdiocese of Philadelphia; and Doug Barry, husband and father of five, and founder and director of the Catholic ministry RADIX.

Keynote speakers for the Spanish-speaking track were Bishop Octavio Cisneros, auxiliary bishop of the Diocese of Brooklyn and Monsignor John Campbell, pastor emeritus of Queenship of Mary, Northampton.

In Coffin’s talk, he said the key to Christian manhood all hinges on what is a man and who is Jesus.

A real man, according to Coffin, is not one of the 71 gender options listed on Facebook but one of the two sexes created by God.

“This is where we are at. We live at a time with 71 genders and a time that is gender versus sex,” he said.

Coffin then said men need to work and struggle to learn more about three virtues: chastity, courage and patience.

“You know that you are feeling chaste when you are not giving in to lust. Sin is in the will to be tempted to lust after someone,” he said.

“And one of the biggest lies we are told is that courage is only for brave men. Courage comes alive in the face of fear. The Bible tells us over and over to ‘be not afraid,’” said Coffin.

He also stressed the importance of patience and reminded the men that “God is love. God is patient.”
“We have become impatient. Men are bored with the Church,” said Coffin.

“We have domesticated the Bible. The Catholic environment tends to be more feminine than masculine. It’s got to end. We can no longer be absent,’ he said.

Coffin noted that absent abusive fathers are part of the root of same-sex attraction, 70 percent of church goers are women, most religious education teachers are women and worship is mostly organized by women.

“I am not down on women at all. I love my mother, wife and two daughters. But Catholic parishes would shut down without women,” said Coffin.

“I would argue that we are the weaker sex,” he said.

Directing the men to examine their identity, Coffin said men should love God first, their wives second and their children third.

“It’s more important to be a father than a husband. Father flows from husbandhood,” he said.
Coffin acknowledged that many men struggle with “father wounds” stemming from an uncaring, absent father or a father dealing with addiction.

“No matter how good or saintly your dad was – he was still a sinner. You can’t give what you don’t have. You have to have a sense of son-ship rooted in the Holy Father to give your sons a sense of manhood,” he said.

“God continues to will us to be here. That is why we are here,” said Coffin.

He then asked the men to drop their “double loves” and step away from habits like lust, pornography and addiction.

“The truth always grinds out. We can’t walk a crooked path. One little decision to stop can be dramatic. You and I can change our family trees just by the things we decide to give up,” said Coffin.

“We have been put in this world at this time to confront the battle we are facing right now. Let’s not wallow in our wounds. Take your sword and let’s go. We have to keep moving forward and telling the devil ‘not on my watch,” he said.

Barry told the men that the battle shouldn’t be left to just the young guys and urged them to no longer be complacent or apathetic when it comes to spiritual battles.

“We have to hold the faith of our time now. We need to train each other in the Catholic faith. There is an intense spiritual battle occurring in America right now and Catholics need to make use of the weapons God has given us to fight evil attacks on life and family,” he said.

“It’s a very basic concept. We need to use self-defense to become battle ready,” said Barry.
Calling to mind many apparitions of the Blessed Mother, he told the men it is critical to follow Mary’s repeated advice to pray the rosary to help mitigate evil.

“We are seeing evil in ways we’ve never seen it before” such as the Supreme Court’s decision redefining marriage. Furthermore, statistics about the practice of Catholicism in the West are dim, with the majority of baptized Catholics not attending weekly Mass,” said Barry.

As men, he said they “need a fight,” and we need to be told what weapons to pick up and what direction to go.

“Priests are the spiritual officers of the battle,” said Barry.

And the Blessed Mother doesn’t want them to turn away from the battle or bury their heads.

“Our Blessed Mother has come to us in six major apparitions in the last hundred years, all approved by the Church, and every single time she warns us of the consequences of not responding to her call to pray the rosary,” Barry said.

“That rosary needs to be an extension of who we are. We should not leave the house without one on us,” he said.

The conference began with Opening Prayer and featured Eucharistic Adoration, confession and exhibits. 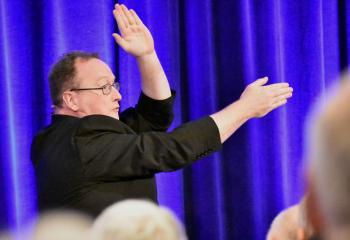 Father Stephen DeLacy, director of the Vocations Office for the Archdiocese of Philadelphia, presents the morning keynote address. 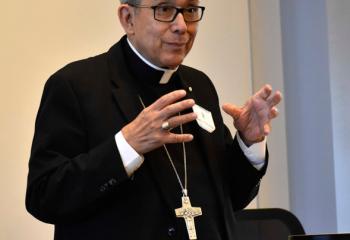 Bishop Octavio Cisneros, auxiliary bishop of the Diocese of Brooklyn, presents a talk at the Spanish-speaking track. 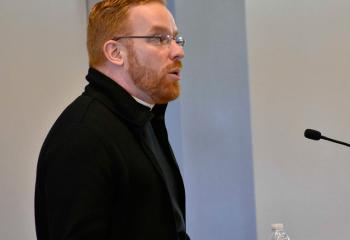 Father Mark Searles, director of the diocesan Office for Vocation Promotion, talks about his vocation to the priesthood and the vocation to be good fathers, brothers and sons. 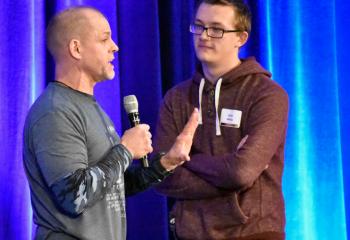 Doug Barry, left, husband and father of five, and founder and director of the Catholic ministry RADIX, discusses the importance of self-defense with Keith Neidig, student at Bethlehem Catholic High School. 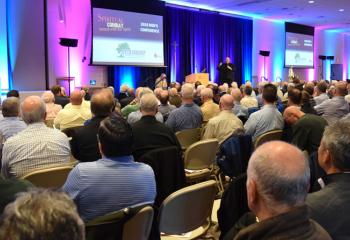 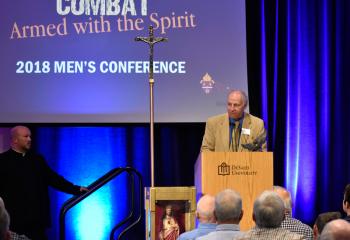 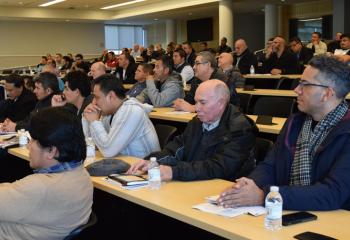 More than 100 men gather for the Spanish-speaking presentations at the Gambet Center. 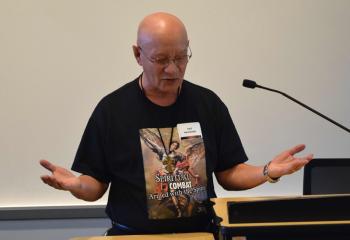 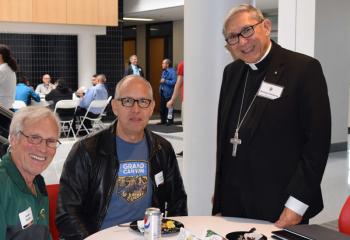 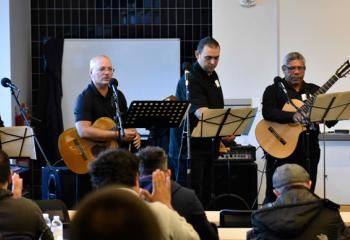 The Men’s Choir from Holy Infancy, Bethlehem leads worship and praise at the Spanish-speaking track. 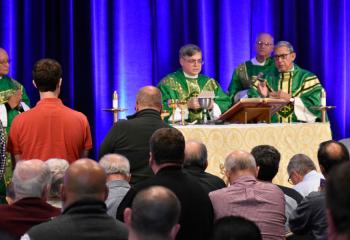 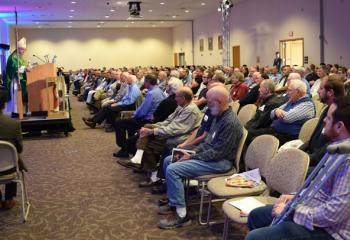 Bishop Schlert offers the homily at the Vigil Mass. 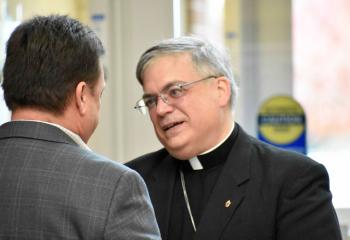 Bishop Schlert chats with one of the men participating in the conference. 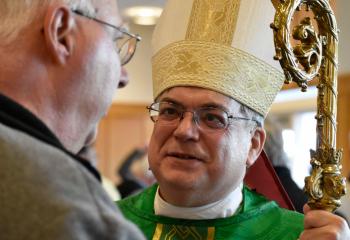 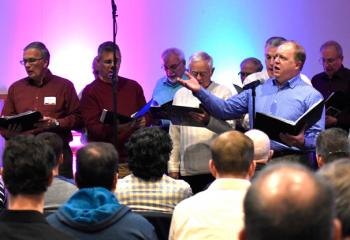 Men from the Cathedral of St. Catharine of Siena, Allentown choir sing the Responsorial Psalm during Mass. 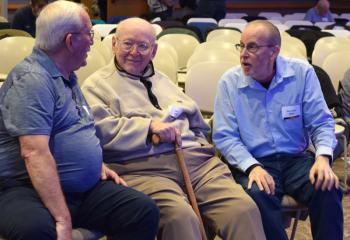 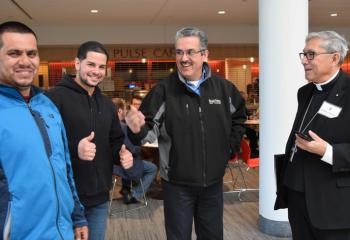 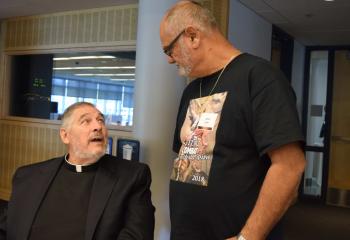 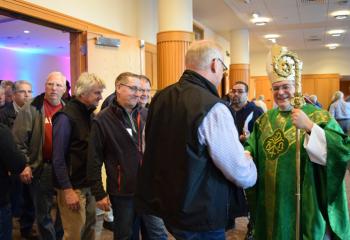 Bishop Schlert introduces himself to men attending the conference after Mass.