Medicine and a Sense of the Sacred 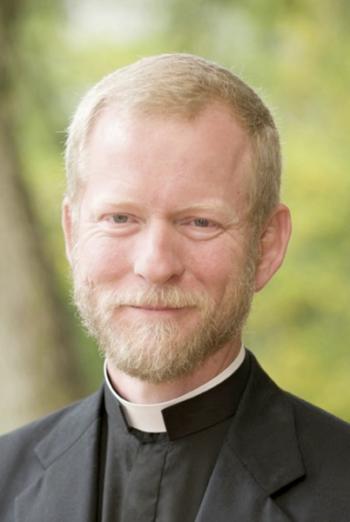 A column by Fr. Tad Pacholczyk who earned his doctorate in neuroscience from Yale and did post-doctoral work at Harvard. He is a priest of the diocese of Fall River, Massachusetts, and serves as director of education at the National Catholic Bioethics Center in Philadelphia.

As clergy, we touch upon very holy realities when we baptize, consecrate the Eucharist, give absolution to sinners or anoint the sick. These special moments engage divine grace in deep and important ways in the lives of those to whom we minister.

In the midst of these sacred realities, we remain nonetheless, very human and fallible instruments. I remember one time when a bishop contritely divulged in my presence that during the consecration that morning all he could think about was a good cup of hot coffee.

We clergy need to attend carefully to the graced realities we regularly handle lest we end up squandering or losing our sense of the sacred. The old adage reminds us: familiarity breeds contempt.

An elderly priest and professor in Rome used to urge us as seminarians: “Seek the grace to celebrate each Holy Mass as if it were your first Mass, your last Mass and your only Mass.”

Similar challenges exist in the world of medicine. Physicians who work with frail and vulnerable human beings every day must be attentive when it comes to the sacredness of their subjects and their profession.

One of the lesser-known lines from the famous Hippocratic Oath has always intrigued me: “In purity and holiness I will guard my life and my art.”

Doctors face a range of unique temptations that the oath enumerates; it counsels them to swear off “all mischief and in particular of sexual relations with both female and male [patients]” as well as all abortions and acts of euthanasia. To engage in any of these activities is to lose one’s way, forswearing the sacredness of the medical profession’s calling.

Yet some doctors, not unlike some priests and bishops, end up losing touch with this “sacred dimension.”

An article in the Irish Times, written by a physician in the run-up to the 2018 abortion referendum in Ireland, exemplified this loss and profanation of medicine’s sacredness.

After a routine 20-week ultrasound of her third pregnancy, Dr. Caroline McCarthy described her sadness at learning that her baby “had no kidneys and as a result there was no amniotic fluid. His lungs could not develop properly without the fluid, but he wouldn’t need his lungs or his kidneys until after birth, so the pregnancy would probably carry to term.”

She was told she had two options: “Carry my baby to term and he would either be born dead or die shortly after birth, or travel to the UK to end the pregnancy.”

After a few days spent in a haze of panic and tears, McCarthy and her husband Michael took a flight out of Ireland to undergo a “compassionate induction” of labor at Liverpool Women’s Hospital. The terminology brought to mind an astute observation a friend had once made: “Beware of any medical procedure with the word ‘compassion’ in its name; it often conceals wrongdoing.”

When the hospital clerk arrived to get their informed consent signature, the procedure listed on the form was “feticide termination of pregnancy.” Feticide is a medical term referring to the killing of a human, in this case during an early stage of development – “fetal homicide.”

After McCarthy’s labor was induced, a large-gauge needle (termed a “catheter” in the article) was used for the feticide; it passed through her abdomen and uterus into her baby’s heart, and potassium chloride was injected to stop its beating.

Shortly thereafter, her stillborn son was delivered: "I saw his perfect little face for the first time. I felt that same post-birth relief and elation as I had after the birth of my other two children. The midwife wrapped him in a towel and I held him close. I felt at complete peace with my decision and just sat holding and staring at my beautiful son. In the morning, the midwife helped us dress John. We spent the day holding and looking at him and taking photographs."

It’s hard to miss the jolting unseemliness of the family’s taking photos of their dead child whose life they had just ended. McCarthy’s actions cannot be squared with her vocation as a mother or with her sacred calling as a physician to “do no harm.”

That sacred calling translates into helping all those born with birth defects or afflicted by disease, without ever imposing death penalties onto them. Ahead of all others, physicians are tasked with grasping this key truth.

Hippocrates possessed unusual wisdom and foresight to codify these real dangers for the soul of the medical professional millennia ago.

As we witness an unprecedented collapse of the sense of the sacred within the world of the healing arts today, we must assiduously pray for those who have turned their backs on that ancient and time-tested oath, and vigorously support those fighting to uphold its tenets within medicine’s hallowed hallways.