‘Lord, To Whom Shall We Go?’ Summons Men to Stand for Jesus 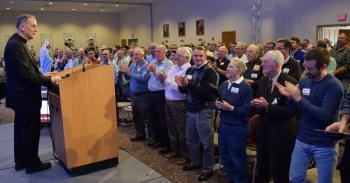 “Brothers, we have to come to terms with where the culture is. We are getting cornered and we can’t escape standing up and becoming alive in Jesus Christ,” said Peter Herbeck, vice president and director of missions for Renewal Ministries, Nov. 4 during the Diocese of Allentown’s Spirit 2017 Men’s Conference at DeSales University, Center Valley.

An estimated 600 men came together for the day, “Lord, To Whom Shall We Go?” to examine the challenges of today’s culture and to discover what God is calling them to do as learners and teachers of the faith.

The other conference speakers that delivered their presentations in Spanish were Bishop Nelson Perez of Cleveland, Ohio; and Deacon Ramon Lima, who serves the Diocese of Brooklyn, New York.

Herbeck opened his talk with the secret to “growing in the Lord” by reiterating Pope Benedict’s call for every person to read the Bible daily and feed on it.

“You will find it in the daily readings of the Scriptures. The word is alive with the breath of God. When God speaks, he changes us,” he said.

He told the men that “Christianity” means change because God lives in them and that they were chosen to be saved through the sanctification of the Holy Spirit.

“His power is in you. He wants us to shoot for heaven,” stressed Herbeck.

When the men became baptized, Herbeck said they were also crucified with Christ, rose with Christ and were given the grace of the Holy Spirit.

“You became a new creation through baptism. There is a power in you that is stronger than death. You are a child of God and a disciple of Jesus Christ and are called into relationship and to be life-long learners of Jesus Christ,” he said.

To grow in Christ, Herbeck told the men they must imitate Jesus Christ and by doing so “they know where they are heading.”

“You are headed for glory. You know where you are going and you know your destiny. A lot of people don’t know where they are going. You are bound for glory. When you know who you are in Jesus Christ, you do not fear death. It’s the devil’s strategy to enslave humanity through fear of death,” he said.

Herbeck then pointed out the decline in the life of the Church and maintained that it’s getting tougher to be a Catholic and stand for what we believe in today’s culture.

“A lot of men are reevaluating their life in the Church. The heat is getting turned up. John Paul II said we are entering the final confrontation between Christ and the anti-Christ. This is the battle we must enter and we must not be afraid,” he said.

In addition, Herbeck shared the words of Pope Benedict’s 2009 letter to Bishops that summarized what he saw as his main mission as the successor of Peter: “In our days, when in vast areas of the world the faith is in danger of dying out like a flame which no longer has fuel, the overriding priority is to make God present in this world and to show men and women the way to God.”

“The light from God is going dim and as a result, we are losing our bearings. When God is pushed from the human horizon – darkness comes to the human mind. We don’t know what marriage is or what a woman or a man is. Its madness and it’s getting harder to say it,” he said.

“The entire world is at war with marriage and family. We are in this battle big time. If the family goes – so does the faith. The family is the domestic Church and the image of the Trinity. That is why the devil is going after the family. The devil is literally trying to redefine what it means to be human,” said Herbeck.

The answer to the battle, according to Herbeck, is the resurrection of Jesus Christ.

“We are called to this battle. I think a lot of men have checked out and aren’t wielding the sword. Men were made by God to lead their families and be warriors. We are all made for the ultimate spiritual battle,” he said.

He also told the men that it is not good enough to “throw the Lord a bone every now and then” or to live life by their own rules while trying to fit God in.

“It’s all in or don’t come. Jesus says if you want to come, you have to come to terms with discipleship,” said Herbeck.

Turning the men’s attention to today’s culture, he said humanity is focused on self-created freedom and defining their own identity, sexuality and truth.

“It is a fundamental denial of our creator. Many people think everyone has the right to be free and happy. That is not true when the truth rejects God because you belong to God,” said Herbeck.

Urging the men to recognize the biggest battle on the planet, Herbeck said the Church will collapse if men don’t enter the battle.

“The Church will collapse – but it will never die. We are in a battle between the Kingdom of God and the kingdom of the enemy. You must make the decision to fight this spiritual battle,” he said.

He told them that they are called to more, like loving God, loving their neighbor and to make disciples.

“There are gifts in you that you have not discovered yet. There are roads to travel and He is asking you to come with him. Don’t hold back, you have been anointed by God to stand up and reap salvation of souls,” said Herbeck.

During Father Ezaki’s presentation, “Sinfulness: The Challenges Men Face Living in the Spirit,” he asked the men to use their eyesight wisely and assured them that it is possible to purify the mind after sin such as pornography.

“It is easy to fall into sin. It takes work to climb out. It is very easy to acquire sin or bad habits, but tough it is to get rid of them,” he said.

To turn away from sin, Father Ezaki stressed the importance of turning toward God.

“We can’t make it a half-hearted measure. It’s like stopping an antibiotic halfway through treatment. You can be worse than before. It is not enough to turn away from sin. We must also turn toward Christ,” he said.

Even though there is no “delete button” for bad thoughts or images, Father Ezaki told the men they can “crowd out” sin.

“When it comes to your mind – it might not be possible to get rid of terrible pictures, but you can cover them up with better pictures,” he pointed out.

“The one you feed survives. It’s not starving the bad wolf, but it’s about feeding the good wolf,” said Father Ezaki.

When it comes to overcoming pornography and sin, he reminded the men that the thoughts and images in their heads affects them for either good or evil.

“We need to put positive thoughts and images in our heads and our hearts. They don’t have to necessarily be religious – but wholesome,” he added.

He suggested contemplating the lives of the saints and said nothing will bring them to closer contact with Christ.

“The saints make the light of Christ visible,” said Father Ezaki, who also suggested the book, “Saints Behaving Badly” to the men.

Other lives are worth contemplating as well, he said, like the life of Alessandro Serenelli, who murdered St. Maria Goretti.

“He had a profound conversion in prison. He dreamt he saw St. Maria Goretti in a garden and she handed him 14 flowers – one for each knife wound he gave her,” said Father Ezaki.

After prison, Serenelli became a lay brother for the Capuchin Franciscans and was present at her canonization.

“He lived a holy life. With time and patience, the brain can readjust,” he said.

“Why wallow on stupid and immoral stuff? Make it a habit to ponder what is good. A man is what he thinks about all day. Feed the good wolf,” said Father Ezaki.

The day also featured Reconciliation and concluded with a Vigil Mass celebrated by Bishop of Allentown Alfred Schlert. 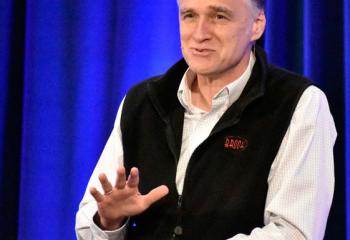 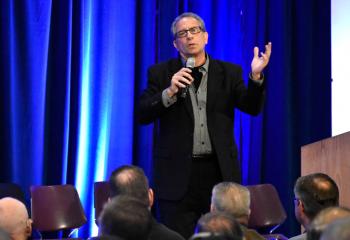 Marty Rotella, song writer and musician for Spirit Power, delivers one of the keynote presentations during the conference. 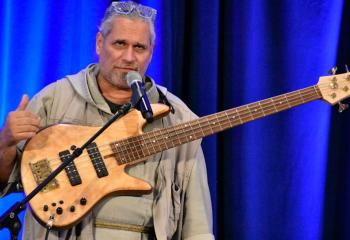 Father Stan Fortuna, an international speaker and evangelical musician who founded Francesco Production, shares his music at the men’s conference. 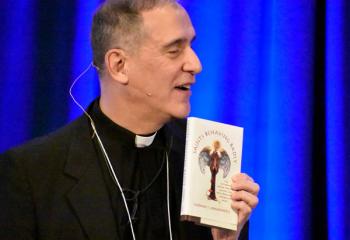 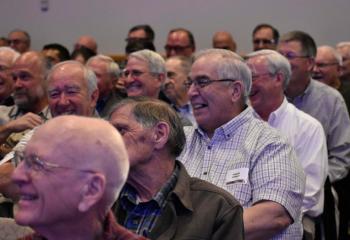 Men enjoy a laugh at the conference, “Lord, To Whom Shall We Go?” 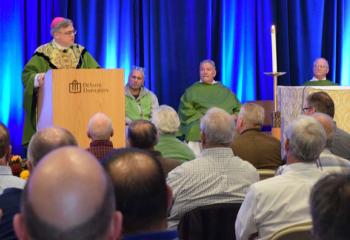 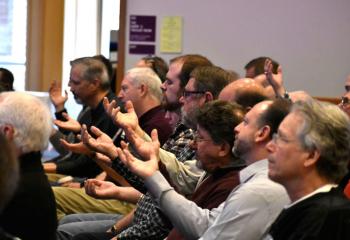 Men pray together by asking the Holy Spirit for greater guidance. 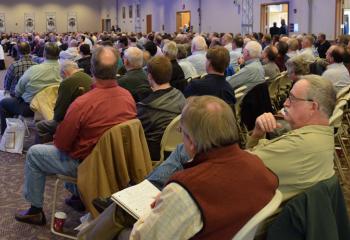 An estimated 600 men listen to a speaker at the conference. 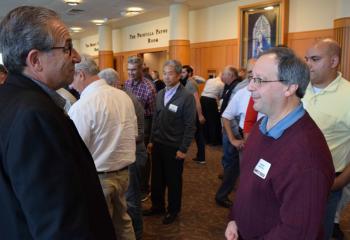 Speaker Marty Rotella, left, talks with Vincent Santvcci, parishioner of Assumption BVM, Northampton, during one of the conference breaks.