Transitional deacons processing in to the Cathedral of St. Catharine of Siena, Allentown on the eve of their ordination to the priesthood are, from left: Deacon Giuseppe Esposito, Deacon John Maria and Deacon Zachary Wehr. (Photos by John Simitz)

“You must be present to your people in every way possible all the time. I suggest that every day you spend some time to acknowledge your priestly identity … your priestly presence. People may not remember what you said, but they will remember that you were present, that you were present as a priest, and somehow that mattered, that was important, because it is important,” said Father Christopher Butera May 31 to three transitional deacons during a Holy Hour on the Vigil of Priest Ordination.

Father Butera, director of the Diocesan Office of Seminarian Formation, delivered the homily during the Holy Hour at the Cathedral of St. Catharine of Siena, Allentown.

Bishop of Allentown Alfred Schlert presided at the ceremony during which he consecrated the Diocese to Jesus through Mary as part of the Flame of Love Movement across the nation. The consecration was part of the commemoration of three Marian feasts: Feast of the Visitation; Lady of All Nations; and Mary, Mediatrix of All Graces.

In addition, he consecrated the chalices to be used by Deacon Giuseppe Esposito, Deacon John Maria and Deacon Zachary Wehr after their ordination to the priesthood on June 1.

In his homily, Father Butera said the ceremony’s primary purpose was to pray for the three men and for vocations in general in front of the real presence of the Lord in the monstrance.

“There are many responsibilities and duties that a priest must undertake such as to administrate, finances, counselor, dispenser of the sacraments, and others – but one of the greatest responsibilities you will have – and pervades every responsibility – is to be present, or to have a presence,” he said.

He went on to share a personal experience while on active duty in 2011. After he was alerted that an Apache helicopter was forced to make an emergency landing, he was whisked away on a Blackhawk.

During the trip, he was informed that the Apache had to fly lower than normal and the helicopter encountered an unmarked trolley line that carried people across a valley from one mountain top to another.

The co-pilot – a young second lieutenant – was able to land the helicopter and survived.

As he flew closer to the site, he saw soldiers and first responders guarding the Apache and the fallen pilot. With his purple stole on, he was greeted by the Brigade Commander, who informed him that he cordoned the area after medics examined the site and fallen pilot and wanted him to take right of the body.

When Father Butera questioned why the men were in position for two hours waiting for him, he was told that what he was about to do there was more important than anything they could do.

“What did I do? I prayed. I prayed over the fallen soldier. I prayed for his family. After a few minutes, I stood up and walked out a feet and yelled fall-in on me, which just means come closer, and I prayed with the co-pilot, security, and first responders,” said Father Butera.

The next day, the commanding general of the area told him that after the family was notified, one of their first questions was whether or not a priest was at the scene.

“During the mission debrief, the first responders and security reported in their official reports, ‘The presence of the priest allowed us to do what we needed to do,’” recalled Father Butera.

He then told the three ordinandi that it could have been any priest at that scene and that the story speaks to the power and meaningfulness of the presence of a priest.

Acknowledging that being “present” may seem like a heavy responsibility Father Butera asked the men to never forget to pray and reflect on the Liturgy of the Hours.

“Sometimes the needs of the people can be great and require your presence a great deal. And so I also say to you never forget the importance of the Divine Office. It will keep you grounded in your priestly identity, connected to Jesus Christ, and tethered in your mission to fulfill your individual calling as a priest,” he said.

“Deacons Maria, Esposito, and Wehr, tomorrow you will be ordained a priest, a priest forever, may you also be forever present to your people with your own strengths and gifts, so that as St. Paul says, ‘You can be all things to all people,’” he said. 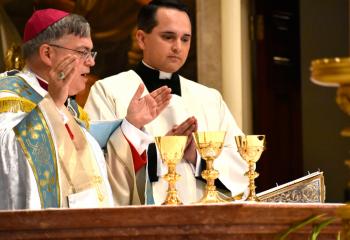 Bishop of Allentown Alfred Schlert, left, consecrates the chalices during Holy Hour for Ordinandi with the assistance of Father Keith Mathur, assistant in the Diocesan Curia and director of the Diocesan Office for Divine Worship. 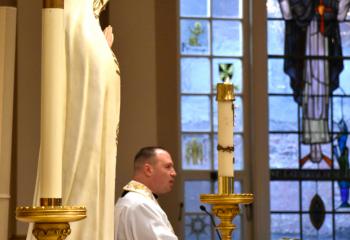 Father Butera, director of the Diocesan Office of Seminarian Formation delivers the homily at the Holy Hour during which the Diocese was consecrated to Jesus through Mary as part of the Flame of Love Movement across the nation. 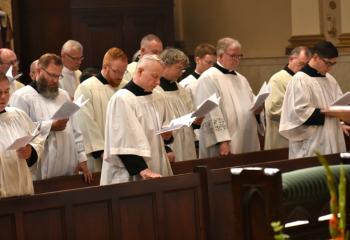 Transitional deacons, deacons and priest pray together during the Holy Hour. 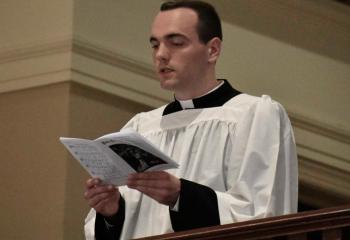 Matthew Kuna, Diocesan seminarian, sings with the choir at the cathedral.