Grotto at Shrine in Nesquehoning Placed on National Register 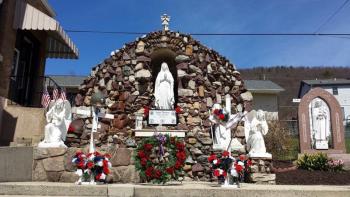 The grotto in Nesquehoning is now part of the National Register of Historic Places.

A grotto located in the Diocese of Allentown has been approved by the National Register of Historic Places and identified as a structure important to America’s history.

The Grotto, Our Lady of Lourdes Shrine at the Shrine of St. Therese of Lisieux in Nesquehoning, initially became the first standalone resource in Pennsylvania unanimously approved for its historical significance by the Bureau for Historic Preservation, Pennsylvania Historical and Museum Commission.

Built on the grounds of the former Our Lady of Mount Carmel Parish by a local coal miner, Placidio Guido LaRizzio, the grotto was dedicated Oct. 15, 1945 to the memory of all service men and women who died in World War II and in thanksgiving memento for the safe return home of members of the parish and all fellow servicemen.

Historical records also maintain that the grotto evolved into a significant cultural place within the Italian-American neighborhood of New Columbus, in Nesquehoning Borough during a time when Italian immigrants and their descendants were struggling to become part of American culture.

The shrine is now part of the parish of St. Joseph, Summit Hill. The parish’s pastor, Father Allen Hoffa, is rector of the shrine.

Lucille Richmond, parishioner who helped seek the grotto’s placement on the register, said the grotto’s construction began in 1941 under the vision of Monsignor Agnello Angelini, who was appointed pastor in 1932.

“He wanted to replicate the grotto in Lourdes, France. He purchased all the statues. It took a number of years, but he wanted to make sure that veterans would always be remembered,” she said.

Through the years, Richmond said, the grotto became a special area for community gatherings, to spend time with the Blessed Mother, and engage in prayer for military service men and women who serve and protect the nation.

“When they would return home from service or war, many soldiers brought back rocks, coral and sea shells and placed them at the grotto. As of today, there is some type of memento from every U.S. state and all seven continents,” she said.

The grotto will was officially recognized Sunday, Oct. 6 during the celebration of the Feast of St. Therese (Shower of Roses) at the Shrine of St. Therese of Lisieux, Nesquehoning. 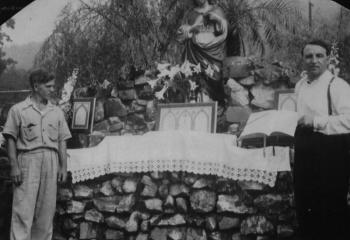 Placidio Guido LaRizzio, left, and Monsignor Agnello Angelini stand before the Grotto, Our Lady of Lourdes Shrine that was constructed by LaRizzio.