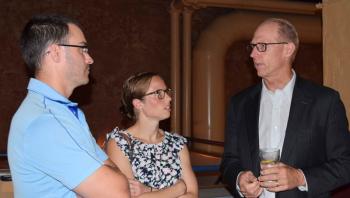 Mike Guman, right, chats with Tyler and Joanie Troutman before Guman presents “Faith on the Job: Maintaining Values in the Workplace” Aug. 21 at Allentown Brew Works. (Photos by John Simitz)

“People, prayer, priorities – that’s what everything should revolve around,” said Mike Guman, vice president of Oppenheimer Funds and former NFL player for the Los Angeles Rams 1980-88, featured speaker at an evening presentation that wrapped up the summer series of Theology on Tap.

Guman presented “Faith on the Job: Maintaining Values in the Workplace” Aug. 21 at Allentown Brew Works in a session sponsored by the Diocesan Office of Youth, Young Adult and Family Ministry (OYYAFM).

Guman and his wife Karen are parishioners of St. Thomas More, Allentown and have four children. He was a star running back at his alma mater, Bethlehem Catholic High School (Becahi) and a 1980 graduate of Penn State University, where he played football under coach Joe Paterno.

Theology on Tap is a young adult speaker series sponsored by OYYAFM for married and single young adults, scheduled for the third Monday of every month at various locations in the diocese.

It is designed to allow young adults to come together in a comfortable and relaxed setting to share community, learn more about their faith and discuss faith topics relevant to their life experiences. It originated in the Archdiocese of Chicago, Illinois.

Guman frequently referenced Paterno in his presentation, and recalled these words of Paterno’s, “The person you are going to become is because of people you meet and books you read.”

“Growing up, my football idol was Gayle Sayers,” Guman said, noting Sayers wrote the book “I Am Third,” in which he says “it’s about faith, family then yourself.” Sayers is also remembered as Brian Piccolo’s friend and teammate on the Chicago Bears as depicted in the movie “Brian’s Song.”

“I grew up in a great Catholic Christian family. My parents always told us to keep our priorities in order – faith, family and whatever comes next,” Guman said.

“I can’t thank my parents enough.”

Guman’s father was 71 and his mother was 78 when he lost them to cancer. He was struck by the way they both had “dignity, grace and faith” as they knew the end of their lives on earth neared.

Guman said he began dating his future wife Karen while he was a junior at Becahi and she was a sophomore at Liberty High School, Bethlehem. “We got married after my first year in the NFL. She is the heart and soul of our family.”

Guman gave his wife much credit for handling life being married to a professional athlete so well, and their relationship only grew stronger when they began having children.

One night while she was pregnant, Karen asked her husband to pray out loud with her before they went to sleep. “We do that to this day. I can’t tell you what that has done for our marriage and our relationship. No matter what happens during the day, it always ends that way,” Guman said, encouraging young married couples to do the same.

When the Gumans returned to the Lehigh Valley in 1989 after a decade in California, they moved into the parish of St. Thomas More, and Guman had warm words about its “dynamic” and wonderful pastor, Msgr. John Murphy.

Guman cherishes the memory of visiting Paterno two months before he died Jan. 22, 2012. He recalled it was a miserable, rainy day in State College, and Paterno had already been relieved of his duties after the Jerry Sandusky scandal, and had been diagnosed with terminal lung cancer.

Guman said Paterno’s wife Sue said they had just returned from a visit to the doctor, and she had to place a blanket over Paterno in the car to shield him from the paparazzi.

Guman recalled he and Paterno just talked for about 45 minutes. “It’s people, prayers and priorities that shape your life,” Guman said.

How has Gunman stayed Catholic in the workplace, especially as an NFL athlete? “I have a deep belief and faith that I’m blessed with that I learned from my parents,” Guman said. “I also had phenomenal friends when I was playing who were Christian; they weren’t all Catholic, but Christian.

“Stay with people you’re similar to and try to reach out a bit.”

Theology on Tap events are free of charge. Food and beverage can be ordered from the menu at the event site. For email adoncsecz@allentowndiocese.org. 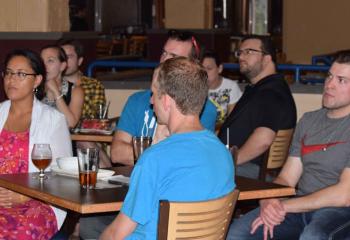 Young adults listen to Guman’s presentation, which wrapped up the summer session of Theology on Tap, sponsored by the diocesan Office of Youth, Young Adult and Family Ministry. 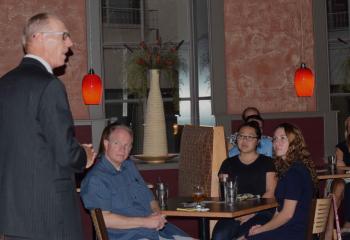 Guman makes a point during the evening event. 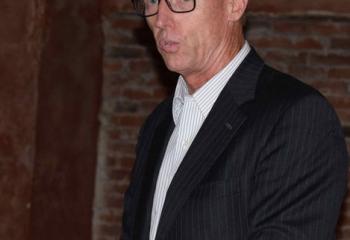 “I grew up in a great Catholic Christian family. My parents always told us to keep our priorities in order – faith, family and whatever comes next. I can’t thank my parents enough,” Guman says. 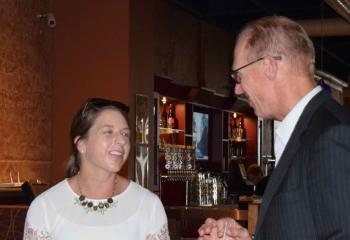 Allison Yudt speaks with Guman during the event. 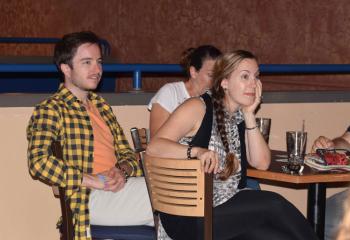