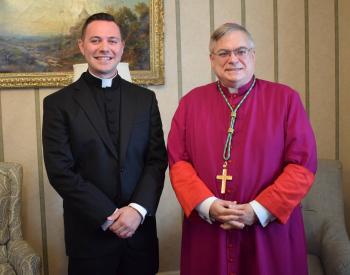 Philip J. Maas, who first heard God’s call as a high school student while in Adoration of the Most Blessed Sacrament, today (6/5) completed his joyous journey to the Priesthood when he was ordained by Bishop Alfred Schlert.

It’s always moving to prayerfully participate at an Ordination, and today’s  Mass at the Cathedral of St. Catharine of Siena was perhaps more moving than usual, taking place amid the Year of the Real Presence in the Diocese of Allentown, and being among the first diocesan special events to be once again open to attendance at full capacity.

As Deacon Maas lay face down on the floor before the altar, the choir and congregation chanted the Litany of the Saints, calling on angels and saints in heaven by name to pray for him, for the Bishop, and for all present.

Then came the laying on of hands, an essential part of the Sacrament of Holy Orders – done in complete silence, first by Bishop Schlert and then by every priest present – signaling the true fraternity of the priesthood. This was followed by the Prayer of Ordination, the moment at which a Transitional Deacon becomes a priest.

Now-Father Maas then was vested for the first time as a priest by his mentor, Father Adam Sedar. Bishop Schlert then anointed his hands with the Sacred Chrism oil. After receiving his chalice and paten, he received a fraternal kiss of peace, first from Bishop Schlert then from every priest present.

“What a glorious day in the Diocese of Allentown,” Bishop Schlert said in his homily, noting that Father Maas is the second priest ordained this year, following the Ordination of Father Juan E. Rodriguez  in January.

The Bishop noted that this is the Universal Year of St. Joseph. “These ordinations show that St. Joseph is watching over the Church in Allentown, and he is providing for the needs of our Diocese, great as they are.”

Bishop Schlert then thanked Father Maas’ parents. “You have given the Church the greatest gift that any parents can give, a son or daughter in service to the Church.”

He invited all parents throughout the Diocese to do what the Maas’s have done  – “to have a fruitful marriage that encourages vocations to the Priesthood.” He said there is a tremendous need in our Diocese for priests and consecrated religious men and women.

He asked the faithful to pray for vocations, to identify a young man or woman in their parish who might be a candidate for a vocation, and then to talk with them about it.

In reference to the Year of the Real Presence in the Diocese, Bishop Schlert turned to Father Maas and said, “You are now the minister, the custodian, along with the Church, and along with your brother priests, of that Most Blessed Sacrament.”

Father Maas, 30, is the son of James and Sandra Maas of Center Valley. Born and raised in the Lehigh Valley, he was educated in Allentown Diocese Catholic Schools. He attended St. Michael the Archangel School in Colesville and graduated from Allentown Central Catholic High School in 2009.

He graduated from Rensselaer Polytechnic Institute, Troy, New York in 2013 with a Bachelor of Science degree in electrical engineering and worked for Lutron Electronics as an electrical engineer prior to entering Saint Charles Borromeo Seminary. He grew up at Assumption B.V.M. Parish in Colesville and has been a member of the Cathedral parish since moving to Allentown after College.

Father Maas enters the Priesthood at a time when there are fewer diocesan priests than ever to serve the faithful in the 60-year history of the Diocese. That is part of the reason that Bishop Schlert has asked everyone in the five counties of the Diocese to pray in Adoration before the Most Blessed Sacrament that more young men will be open to becoming a priest.

The Year of the Real Presence is a time for the faithful to rededicate themselves to, and to reaffirm their belief in, the presence of Jesus Christ in the Holy Eucharist. The year also is a time for people to rejoice in the gift of their own presence at Mass with families, friends, and clergy.

Father Maas received his first assignment as a priest shortly after the Mass ended. He will be Parochial Vicar at Saint Ignatius of Loyola Parish, Sinking Spring, and at Saint Francis de Sales, Robesonia. 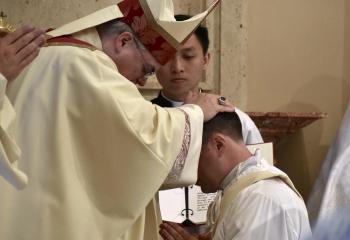 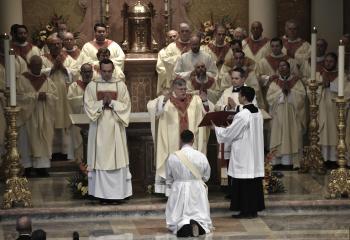 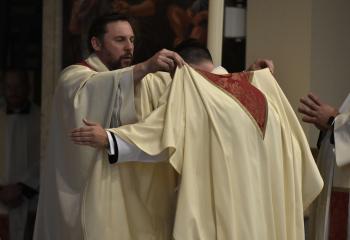 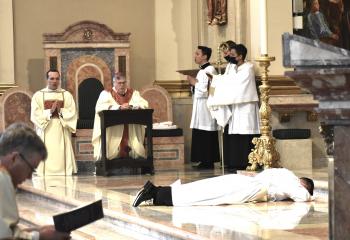 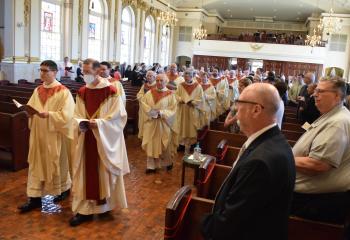 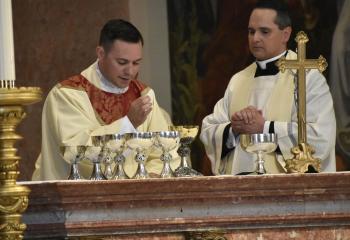