An Evening of Divine Mercy 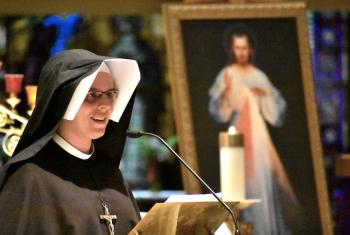 Congregation of the Sisters of Our Lady of Mercy Sister Gaudia Skass presents the Lenten reflection “God’s Remedy for Our Sins” to more than 300 faithful during An Evening of Divine Mercy April 11 at St. Joseph the Worker, Orefield. (Photos by John Simitz)

As Congregation of the Sisters of Our Lady of Mercy (OLM) Sister Gaudia Skass spoke about God, she told the more than 300 faithful gathered April 11 at St. Joseph the Worker, Orefield, “Seeing the works of his hands and knowing his final creation is you and me … in a moment of silence in your heart, think what is he like.”

Sister Gaudia, of the St. John Paul II National Shrine in Washington, D.C., shared this thought while presenting the Lenten reflection “God’s Remedy for Our Sins” during An Evening of Divine Mercy.

Sister Gaudia gave a moving presentation about God’s infinite mercy during an evening centered in prayerful Adoration of Our Lord. Exposition and Benediction of the Blessed Sacrament followed her presentation.

The evening was co-hosted by Divine Mercy Cenacle Group of St. Joseph the Worker and the Diocesan Secretariat for Catholic Life and Evangelization.

Those attending included Mary Fran Hartigan, secretary of the secretariat; and Rick Dooley, assistant director of the Diocesan Office of Adult Formation.

Born and raised in Poland, Sister Gaudia studied painting at the Academy of Fine Arts in Warsaw before entering the Congregation of the Sisters of Our Lady of Mercy in 2005, making her perpetual profession of vows in 2014.

For six years she ministered to pilgrims at the Divine Mercy Shrine in Kraków, Poland, where she also worked in the “Faustinum” Association of the Apostles of Divine Mercy.

In 2015 she completed graduate studies in journalism. Besides media work, Sister Gaudia enjoys youth ministry and served for two years on a team coordinating events for World Youth Day Kraków 2016.

“Imagine he is sitting in this chair – it’s not impossible, he walked among us more than 2,000 years ago. St. Faustina had a beautiful vision of him.

“Think that you are alone in the church, just you and Jesus. What do you do?” Sister Gaudia asked. She said some may stay in the pew, leave because they’re scared or come closer – but how close? – bow down, or kiss his hand or feet. “Would you jump up and hug him like the best moments of childhood when you trusted your parents completely?

Sister Gaudia said history tells us many would keep their distance. “Why are people afraid? Why not throw your arms around him like a child greeting their dad coming home from work? It’s our most fundamental relationship – he’s our dad, the best of dads.”

Sister Gaudia said the source of our problem is found in Genesis 3 – the fall. She said God created man and woman to rule over everything, except not to eat the fruit of one tree. Eve listened to the serpent and ate the fruit, and gave some to Adam. They sinned.

“It’s good to know who the enemy is,” Sister Gaudia said. “Satan is more crafty and sneaky than anyone – keep watch, have your eyes open. Satan is not the creator and artist God is. He is limited. Don’t let yourselves be tempted again and again in the same way. Satan wanted to destroy Adam and Eve – and us – he wanted to destroy their relationship with the Father.”

Sister Gaudia said the key is the truth. Eve could have won with the truth, by believing God and not the serpent. “Jesus told St. Faustina, ‘don’t even enter into the dialogue’ with Satan. But Eve did engage, and Satan planted the seed of doubt in her mind.”

Sister Gaudia said the first stage of distrust is doubt that grows into suspicion, anxiety, then self-destruction.

“We are all children of Adam and Eve, and this is the wound we were born with, so when our God tells us something, we doubt it,” Sister Gaudia said. She added when it’s something we agree with, its fine, but if we don’t, we start to question “is this what the Church says, what the Catechism says?”

Sister Gaudia said our culture today says you can only be happy if you do what you want, like Satan said Eve would be happy if she ate the fruit.

“God’s will wants the best for us. He knows us better than we know ourselves. He waits for us to ask ‘what’s your will?’ and then follow that,” she said. “There’s fear in following his commands, not the joy of ‘this is my happiness.’”

“Eve reached for happiness without God, ate the fruit and gave it to Adam.”

Sister Gaudia recounted when Adam and Eve heard God’s footsteps in the garden they hid from him.

“The first fruit of any sin is fear. We were afraid of Jesus and decided to kill him. I hope when you hear the Passion you know it’s not the Jews or Roman soldiers to be blamed. You and I are there, and that’s the price for your mistakes,” Sister Gaudia said.

“All of us keep on hurting God with our sins. Jesus told St. Faustina, ‘Distrust on the part of souls is tearing at my insides.

The distrust of a chosen soul causes me even greater pain; despite my inexhaustible love for them they do not trust me.

Even my death is not enough for them. Woe to the soul that abuses these.’”

“That’s why the image of Divine Mercy has one phrase, ‘Jesus, I Trust in You,’” Sister Gaudia said.

Sister Gaudia said God knows all the pain in our hearts, and Jesus told St. Faustina, “Today I am sending you with my mercy to the people of the whole world. I do not want to punish aching mankind, but I desire to heal it, pressing it to my Merciful Heart.”

Sister Gaudia asked all those gathered to open the small gift wrapped in plain brown paper they were given when they entered. Everyone had been asked their first name when entering, then given the gift with the words for and their name written on top. The gift was a crucifix.

“Keep the crucifix and the paper with your name on it – for you,” she said.

“Look at the cross and allow Jesus to speak in the depths of your hearts.”

Sister Gaudia said Jesus told St. Faustina that when he was dying on the cross he wasn’t thinking of himself. “Think of the pain he endured, the scourging, even before the crucifixion. He did it for me.”

“He died for us. What more could he have done so we would believe in his love?” she asked.

“Our image of God is distorted by each sin we do.” 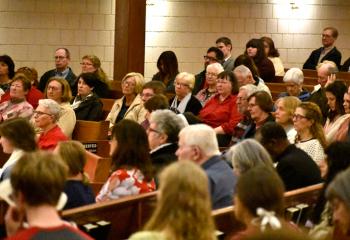 Those gathered listen to Sister Gaudia at the evening co-hosted by Divine Mercy Cenacle Group of St. Joseph the Worker and the Diocesan Secretariat for Catholic Life and Evangelization. 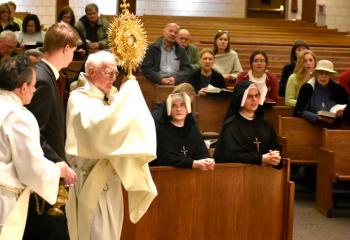 Deacon Charles Coyle, retired permanent deacon of St. Joseph the Worker, carries the monstrance in procession at the Exposition of the Blessed Sacrament. With him are, from left, Deacon Bruno Schettini of St. Joseph the Worker and Rick Dooley. Seated in the pew behind them are, from left, Congregation of the Sisters of Our Lady of Mercy Sisters Veritas Green and Gaudia Skass. 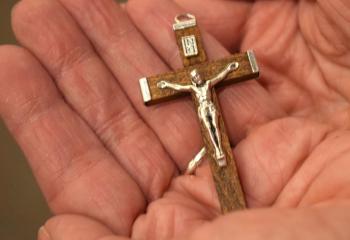 The crucifix given to everyone as a reminder Jesus died “for you.”