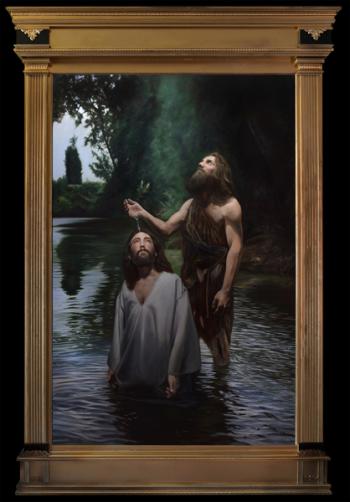 Eric Armusik’s “Baptism of Christ” painting in the frame built by the artist is now displayed directly above the baptismal font at the entrance of St. Mary, Hamburg. (Photo courtesy of Eric Armusik)

“Religion is the everlasting dialogue between humanity and God. Art is its soliloquy.”

These words of Franz Werfel (1890-1945), the Austrian-Bohemian novelist, playwright and poet who penned the 1941 novel “Song of Bernadette” about the life and visions of St. Bernadette Soubirous, eloquently describe the sight of the new

“Our parish is blessed to have such an extraordinary artist as Eric Armusik as a member of our faith community,” Father Cieniewicz said. Armusik and his wife Rebekah are the parents of three children.

“It was truly an amazing process and I am grateful for the opportunity,” said Armusik.

The painting was unveiled at St. Mary on March 24 in time for the Palm Sunday Vigil Mass. It was displayed in the back of the church during Holy Week and permanently installed the first week of April.

“It was my desire to create a truly dramatic moment when painting the Baptism of Christ. What I hoped to achieve was a delicate balance between this beautiful spiritual moment and a painting that expressed the deep emotions of Jesus and John the Baptist,” said Armusik.

“I hope that all of my religious paintings will continue to inspire a deeper understanding of our faith. I was extremely happy to see such a positive response from the parishioners of St. Mary’s at the night of the unveiling and the weeks that have followed. The whole experience was a wonderful blessing.”

“Eric has been a professional artist for over 25 years and has been one of the premier religious painters in the world today.

He is regularly commissioned to do paintings and churches for many international clients,” said Father Cieniewicz.

“Eric is a lifelong and practicing Catholic that became inspired as a child attending Mass in several elaborately decorated cathedrals in northeast Pennsylvania where he grew up.” Armusik is a native of the Wyoming Valley.

“Eric also built the elaborate frame which measures 5.5 by 8 feet, drawing on his experiences working with his father in the carpentry trade when he was growing up,” Father Cieniewicz said.

“Combined with his skills as a traditional craftsman and drawing on his experiences studying in Italy during college, he provides a unique product not offered by many artists in his profession.”

Father Cieniewicz said Armusik has always been happy to share some of his commissions for religious-themed paintings that are sent off to various parts of the country and the world. “His talent is exceptional. His style portrays great detail and captures great emotion.”

“Eric often expressed his desire that one day one of his works would be on display in his own parish church. Parishioners often shared that same desire,” Father Cieniewicz said.

He said after a few years of consideration and discussion among the Parish Council, the Facilities and Finance Committees, Armusik was commissioned to produce a work for the parish. It was decided that a painting of the Baptism of Christ would be a fitting theme as there was an ideal location directly above the baptismal font at the entrance of the church for such a work.

The painting is visible upon entering the church nave by the baptismal font. It hangs approximately 15 feet above the font area. The figures of Christ and John the Baptist are portrayed looking upward toward the source of light from the heavens.

“The detail of the movement of light and the water, along with the expressions of Christ and the Baptist, are extraordinary.

There is a true simplicity and emotion that draws you into the painting,” Father Cieniewicz said.

“The Baptism of Christ painting has elicited many positive comments from parishioners and visitors. The beauty of its detail portrays the powerful moment that initiated the public ministry of Jesus. It is a reminder of the power of our own baptisms in following the way of Jesus Christ.”

To understand what a baptism in a river would look like, Armusik submerged himself in the cold Schuylkill River while his wife Rebekah filmed it in November 2017.

“With the completion of this painting, I feel I've completed the circle of my career and my experiences with art as a lifelong Catholic,” said Armusik.

“Without knowing it, my studies began as a child attending Mass each weekend. My eyes would dance along the altar, the ceiling and the stained-glass windows as I marveled at the beautiful art our faith has inspired.

“It wasn't until I finally got the chance to finally paint at age 20 and the semester that I lived in Italy during college that I understood what my purpose was. Now 25 years later I am seeing that purpose refined after years of hard work.”

Armusik has a limited-edition line of 100 prints of the Baptism of Christ available on the homepage of his website  until they sell out. Each print on Somerset velvet is 16 by 24 inches and is signed and numbered by the artist.

“I have already sold several overseas. At the moment, most orders have come from Italy and Malta,” Said Armusik.

The parish has two other works by Armusik. One painting is of the Madonna and Child, which was produced in replacement of a Rembrandt-style painting that was in the original church. Attempts to retrieve the painting upon the closing of the old church were unsuccessful, as the canvas was glued to the wall.

“Eric painted a work that is similar in style, which now hangs in our church, said Father Cieniewicz.

“The parish also has a painting of St. Therese of the Little Flower.”

Armusik said he attempted to remove the painting that was glued onto the plaster of the original church in 2008.

“The painting was a copy of the Sistine Madonna, also called the Madonna di San Sisto, an oil painting by the Italian artist Raphael Sanzio. The altar piece was commissioned in 1512 by Pope Julius II for the Church of San Sisto, Piacenza. After an unsuccessful attempt, I repainted the artwork and framed it for the new church,” said Armusik.

“The painting of St. Therese was something I had originally painted for my wife, as it is her favorite saint. We donated the painting to St. Mary’s so it could be appreciated by the public as well.”

Armusik did a painting of the Crucifixion for the Cleveland Diocese in 2015.

In 2010 he won the Chairman’s Award for the Sixth International Art Renewal Center competition out of 1,700 submissions from over 30 countries worldwide. Armusik conducts several workshops in traditional painting each year and has attracted students from around the world that come to study with him.

In 2012 Armusik was invited to show his work in Rome for the Vatican’s canonization of seven new saints. He was commissioned to paint St. Jacques Berthieu, a French missionary to Madagascar who was martyred in 1896. Armusik was chosen to paint the saint because of his reputation for dramatic religious painting, especially the subject of martyrdom.

The painting was also displayed at a gala at the Italian Embassy, where Armusik spent time with Cardinal Donald Wuerl, Archbishop of Washington, D.C., and Miguel Diaz, then ambassador to the Holy See.

Armusik’s work has been featured in such galleries and museums as the Salmagundi Art Club and the National Arts Club in New York; Allentown Art Museum; Philip and Muriel Berman Art Museum and the State Museum of Pennsylvania.

His paintings are in the permanent collections of Howard Tullman; The Trenton City Museum; Lehigh Valley Hospital; churches in Washington, Ohio, Pennsylvania and California; and private collections worldwide. 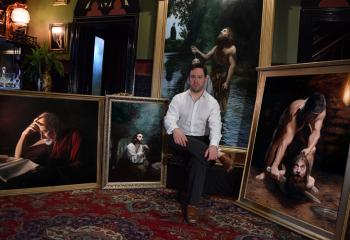 Armusik, parishioner of St. Mary, is surrounded by a sampling of his beautiful work. (Photo courtesy of Eric Armusik) 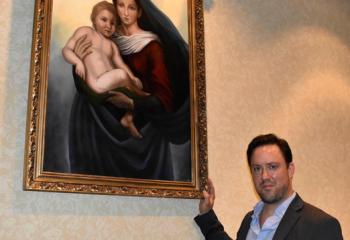 Armusik’s “Madonna and Child” is another of his works that enhances the spiritual beauty of St. Mary. (Photo by John Simitz) 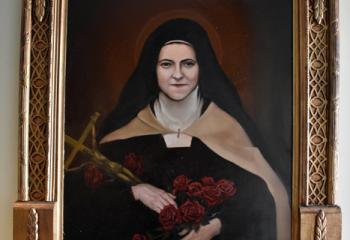 Armusik’s “St. Therese of the Little Flower” is also on display at St. Mary. (Photo by John Simitz) 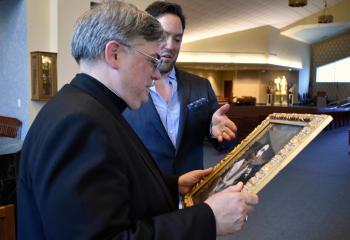 Armusik, right, gifts Bishop Alfred Schlert with his painting “Agony in the Garden” of Jesus praying in the Garden of Gethsemane. Armusik presented the gift to Bishop Schlert prior to the Serra dinner honoring the Diocese’s newly ordained Father John Hutta June 18 at St. Mary. (Photo by John Simitz) 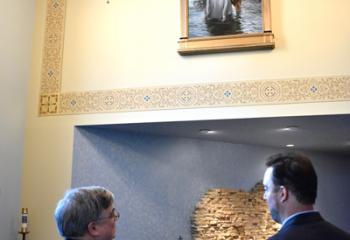 Bishop Schlert, left, and Armusik discuss Armusik’s “Baptism of Christ” as the Bishop admires the painting. (Photo by John Simitz)