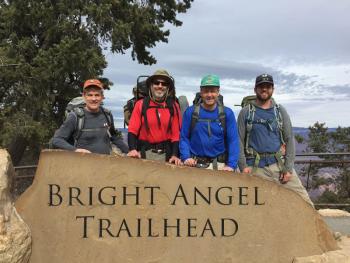 The beauty of the great outdoors and the spirituality it exudes came into full view for three priests of the Diocese of Allentown who hiked the grandeur of the Grand Canyon this past fall.

Msgr. Orsulak said he and Father Gibbons and Father Lamb have been section hiking the Appalachian Trail in Pennsylvania. A few years ago, Father Lamb hiked to the bottom of the Grand Canyon with his nephew, Tim DeCapite, who was a guide for the trio on this trip.

“When Father Lamb got back from that trip he called us very excited and said, ‘We’ve got to do this!’ In fact, he was so excited he may have called even before he boarded the plane to come home. From then on, a trip has been on our radar, and Father Lamb did a tremendous job pulling this together.”

During the priest convocation in Hershey just prior to the trip, the priests did a couple of hours of training by hiking to the top of the ridge upon which the Appalachian Trail is located. “After the Appalachian Trail crosses the Susquehanna River heading north at U.S. 22/322, it makes a steep climb, almost 1,000 feet in 2 miles,” Msgr. Orsulak said.

“Incidentally, there were some patches of snow on top of the ridge, apparently having flurried a day or two before. Ironically, we saw no snow in Arizona elevations much higher,” Msgr. Orsulak said.

Highlights of the trip for Msgr. Orsulak were meeting Tim’s family, as well as spending 48 hours with him while hiking 20 miles; seeing the green of the Colorado River for the first time on the hike down the South Kaibab Trail; reaching the Colorado river; and celebrating Mass on the edge of Plateau Point with the river 1,500 feet practically underneath them.

“Tim pointed out 1,000-year-old Anasazi pictographs only moments before we gained the rim at the end of the hike,” said Msgr. Orsulak, who also highlighted “the spectacular colors of the canyon walls as the sunlight played on them, and the huge hamburger and local beer I had after the hike.”

“The spiritual highlight for me was the Mass. As Father Lamb said, no cathedral could be more beautiful. We each got a little time to pray on our own each day, each going off on his own after we set up camp in the afternoon and before we left camp in the morning.”

Father Lamb said he had done this trip three years ago with his nephews and brother-in-law. “It was fantastic. Since Msgr. Orsulak and Father Gibbons and I had hiked some of the Appalachian Trail before, I called Msgr. Orsulak on my way home from the Grand Canyon telling him how wonderful it was and how we should do it. It took three years to set it up, but we finally got to go.”

Father Lamb’s nephew Tim is a dermatologist who works at the Navajo Indian Reservation in Tuba City, Arizona. His wife Megan is a pediatrician there. “They have been out there for eight years, and will be returning to Maryland, where they are originally from, in August 2018,” Father Lamb said.

“Tim has been on every trail on the South Rim of the Grand Canyon and was an excellent guide for us.

“There is some prep involved in terms of getting in shape – a lot of walking with a backpack on with weights in it. Being in shape helps to make the trip more enjoyable. That way you’re not hurting the whole time from carrying the backpack. So in Hershey at the convocation, we decided to hike part of the Appalachian Trail in Harrisburg to get in shape”

When they arrived by car to the foot of the Appalachian Trail, Msgr. Orsulak and Father Lamb proceeded to put on their backpacks. “Father Gibbons didn’t remember his, so he put on his back the only other heavy object in his trunk – his golf clubs,” Father Lamb said. “Yes, he carried them up the mountain and even hit a few golf balls while he was up there.

“As we came down the mountain to get to our cars, a man who was in the parking lot saw us walking out of the woods – Msgr. Orsulak and I with our backpacks and Father Gibbons with his golf clubs. Without missing a beat Father Gibbons went up to the man and asked him, ‘Have you seen my ball?’ We should have gotten a picture of his face.”

“The beauty of the Grand Canyon is difficult to put into words. When I first saw the Grand Canyon back in 1979 it was the first time I understood what the term ‘breathtaking’ meant. The beauty and size and grandeur of the canyon is magnificent,” Father Lamb said.

“Two things stood out for me. One is the beauty of the sky and stars at night. The stars seem to be right in your face. It is so dark. The Milky Way is brilliant. It makes one feel very small and humble.

“We went to a place at the canyon called Plateau Point. We watched the sunset on the canyon. Again, this is hard to describe. The canyon looks different as the sun goes down. The colors change constantly and are very beautiful.

“We celebrated Mass in a secluded spot. Talk about a God-given beautiful cathedral.”
Another highlight for Father Lamb was “simply spending time with my nephew, who I love, and two great priest friends. Just hanging out together was a gift. We are all so busy in this world, we don’t get to ‘waste time’ together too often. I’m ready to go back.”

“Hiking into the Grand Canyon is like being swallowed up in the grandeur of God,” Father Gibbons said.

“Then to celebrate Mass with two diocesan brother priests, during sunset, at a place called Plateau Point? Wow. It brought awesomeness, beauty, history and mystery into one point.

“That point is not just out in that spectacular point in Arizona, but somehow in our dear Lord. All of this is inside every Mass in which we all participate back here in our parishes in the Allentown Diocese.” 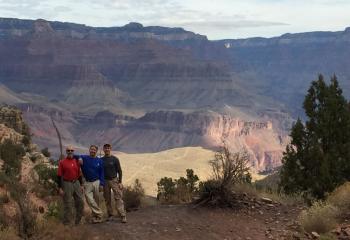 Pausing to take in the vast beauty of the Grand Canyon are, from left, Msgr. Thomas Orsulak, Father John Gibbons and Father Patrick Lamb. 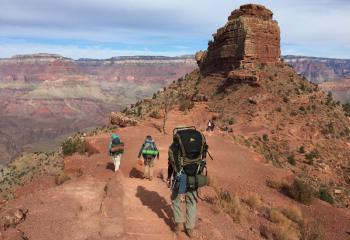 The group hikes the splendor of the Grand Canyon.