Council of Stewards Donors Recognized with Evening of Appreciation at DeSales 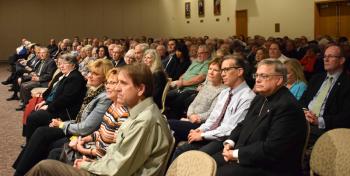 Bishop Alfred Schlert, right, is among the 250 attending a showing of the One Man Performance of C.S. Lewis’ “The Great Divorce” Oct. 21 at DeSales University, Center Valley. (Photos by John Simitz)

In appreciation of their generosity to the Diocese of Allentown, the Council of Stewards was recognized with a special evening Oct. 21 at DeSales University, Center Valley.

The event featuring a One Man Performance of C.S. Lewis’ “The Great Divorce” presented by Anthony Lawton drew 250 guests to DeSales University Center.

The Council of Stewards includes donors who support the Bishop’s Annual Appeal (BAA) with gifts of $500 or more.

The evening was sponsored by the Diocesan Office of Stewardship and Development.

Paul Acampora, Diocesan Secretary of Stewardship and Development, welcomed those gathered. Bishop Alfred Schlert addressed those gathered after the performance, which was followed by a dessert reception.

Lewis’ “The Great Divorce” is a classic Christian allegorical tale. It is the story of Clive, who, along with a motley crew of malcontents, takes a bus ride from hell to heaven. An extraordinary reflection on good and evil, grace and judgment, Lewis’ revolutionary idea is that the gates of hell are locked from the inside.

Clive and the others are offered a chance to stay in heaven forever if they like, but the choice between joy and miserable loneliness proves to be much harder than they would have guessed.

Lewis is best known for his fictional work, especially “The Screwtape Letters,” “The Chronicles of Narnia” and “The Space Trilogy,” and his nonfiction Christian apologetics, such as “Mere Christianity,” “Miracles” and “The Problem of Pain.”

In “The Great Divorce” Lewis champions a simple truth: that ways we live and the choices we make really matter.
Lawton performs the play solo, portraying more than a dozen characters.

One of those characters is a man who is a ghost with a little red lizard on his shoulder. Because the lizard will not be quiet, the man thinks he must return to hell, or “grey town” as it is called.

An angel offers to kill the lizard, and with the man’s permission does so without killing the man, though it hurts him. The man goes from being a ghost into a solid man, and the lizard becomes a great stallion.

Then they ride into the everlasting morning, the foothills of heaven. The man is told nothing can go up to the mountain as it is – flesh and blood cannot come to the mountain because they are too weak.

The Philadelphia-based Lawton has acted professionally since 1992. He has performed in over 100 professional productions, and has experience in film and television.

In 1998 he started the Mirror Theatre Company, which performs solo and small-cast plays. The mission of the Mirror is: Spiritual Theatre for a Secular Audience. The company is committed to presenting drama about our spiritual life that will be of interest to all audiences, secular or religious. Lawton wants his plays to be part of an ongoing dialogue with the audience – a dialogue in which we discuss and consider that which is (or isn’t) eternal in us.

“Thank you all for coming,” Bishop Schlert told donors after the performance, noting that “Anthony is so tremendous” in his performance of this “morality play.”

The evening, he said, is “just a little thank you for all you do.”

“It teaches us a lesson to come together tonight,” the Bishop said. “It reminds us of all our gifts and talents that are all caught up in the morality play of living our lives.

“Sin dies hard, but with the power of Christ can be overcome.”

“The people we serve see Christ day in and day out. I thank you, and they thank you,” Bishop Schlert told donors.
“It’s good to see how many are engaged – and not everyone is here – in this work of Christ, bringing the light of Christ to the community and each other.”

The audience showed its appreciation to Lawton with a standing ovation. 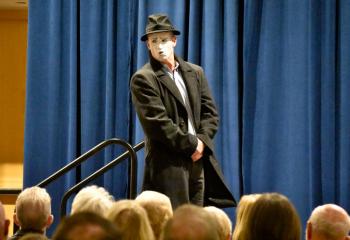 Anthony Lawton presents his show, which drew a standing ovation.

Those attending enjoy the evening performance, sponsored by the Diocesan Secretariat for Stewardship and Development. 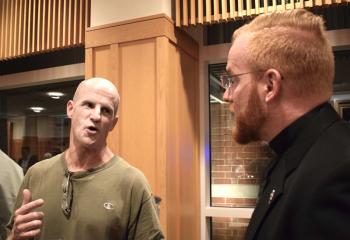 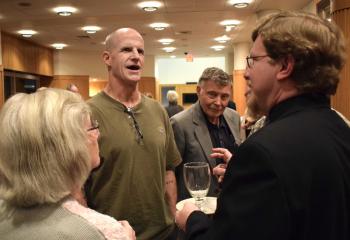 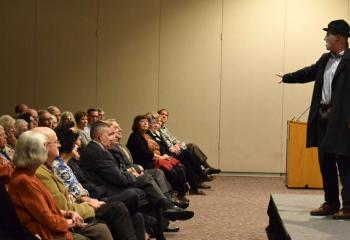