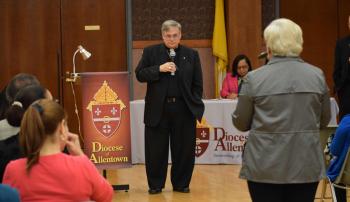 Bishop Schlert responds to questions at the Healing Our Church wrap-up meeting at the Cathedral of St. Catharine of Siena, Allentown.

It has been one year since the release of the Pennsylvania Grand Jury Report on clergy sexual abuse, and during that time, the Diocese of Allentown has taken additional concrete steps – on top of the robust program it already has in place – to prevent abuse and to keep children safe.

The Diocese uses vigilance, education and prevention, coupled with swift and decisive action in the event of an accusation, to address abuse. “Our first priority is to keep children safe,” said Bishop Alfred Schlert.

The grand jury acknowledged in its report that much had changed for the better in the Catholic Church in the previous 15 years. Over the past 12 months the Diocese built on that record of action by implementing what it learned from the report and from the resulting public discourse about the abuse issue. The Diocese:

Published names of accused priests. Priests with a credible allegation of abuse are listed on the Diocese website, including some who were not mentioned in the Grand Jury Report. All priests on the list have been removed from ministry.

Provided millions of dollars for victim compensation. Under the Independent Reconciliation and Compensation Program, victims of clergy sexual abuse are applying to an independent arbitrator for compensation as one aspect of their healing. The program is overseen by an independent board not affiliated with the Diocese that is chaired by a retired federal judge, and the program is administered by Washington, D.C.-based Attorney Kenneth Feinberg and his colleague, Camille Biros.

Enhanced its partnership with law enforcement. Bishop Schlert convened a meeting with District Attorneys of all five counties of the Diocese in November 2018 to pledge continued cooperation and partnership, and to discuss the shared goal of eliminating abuse wherever it may occur in society. In 2002, the Diocese was the first in Pennsylvania to meet with its District Attorneys and turn over personnel records of credibly accused priests.

Involved lay men and women. Bishop Schlert has appointed lay people to key posts in the leadership and operation of the Diocese, in advisory roles, and in the oversight of the Independent Reconciliation and Compensation Program for victims.

Offered a healing program in parishes. “Healing Our Church” was a series of small-group discussions, led by fellow parishioners, intended to encourage reflection and conversation about the clergy sexual abuse. They were planned in response to requests from the faithful for such a forum.

In addition to new actions taken in the past 12 months, the Diocese has continued many of its long-standing policies and procedures that are reducing instances of abuse and keeping children safe:

Screening for aspiring priests. Screening for men entering the seminary has been greatly enhanced over the past 15 years, including the use of two psychological tests: one before acceptance to the seminary and one during seminary studies.

Support for good and faithful priests. The Diocese offers a variety of spiritual and fraternal support programs for priests as they work to serve the people in their parishes throughout the Diocese.

Background checks, training and education. Each year, every child in diocesan schools and parish religious education programs receives age-appropriate training in recognizing and preventing abuse. All clergy, employees and volunteers are required to have background checks and specialized training in recognizing the signs of abuse, and in reporting it immediately as required by law.

“While this past year was painful, it had moments of great strength and hope for the future,” said Bishop Schlert. “I am very grateful to victim-survivors and to our dedicated laity, clergy, and religious order sisters and brothers, who have through their honest dialogue and constructive suggestions assisted me in my responsibilities to heal and fortify our Roman Catholic Family of Faith.”