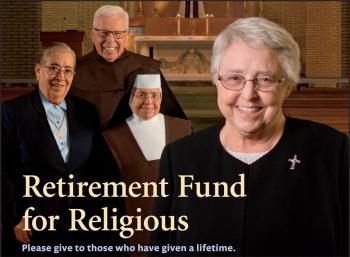 Catholics in the Diocese of Allentown will have the opportunity to “give to those who have given a lifetime” as part of the collection for the Retirement Fund for Religious, to be held in parishes Dec. 9-10.

Last year, the Diocese of Allentown contributed $33,567.76 to the collection.

Additionally, the Diocese of Allentown, in conjunction with the Archdiocese of Philadelphia and the Diocese of Harrisburg, also distributes funding to local religious communities to support retirement needs.

The 2016 collection raised almost $30.7 million. Roughly 94 cents of every dollar aids senior religious. In June, the NRRO distributed $25 million to 390 religious communities across the country.

Communities use these funds to bolster retirement savings and subsidize expenses, such as prescription medications and nursing care. Throughout the year, additional funding is allocated to assist religious communities with the greatest needs and to promote ongoing education in retirement planning and eldercare delivery.

“We are humbled and profoundly grateful for the love and support of Catholics across the nation,” said Presentation Sister Stephanie Still, the NRRO’s executive director.

Despite this generosity, many religious communities still struggle to provide for aging members. Only 41 of the 539 communities submitting data to the NRRO in 2016 were adequately funded for retirement.

Compounding the funding shortage are the rising cost of care and the decrease in income that has resulted from the declining number of religious able to serve in compensated ministry.

“I visit many religious communities and see the good works that members young and old provide,” said Sister Still.

“Generosity to the annual collection ensures our office can furnish support to help these communities care for older members while continuing their ministries and witness.”

About the Retirement Fund for Religious

In 1988, Catholic bishops of the United States launched the Retirement Fund for Religious (RFR) to address the significant lack of retirement funding for Catholic sisters, brothers, and priests in religious orders.

Catholics in the United States have donated more than $816 million to the RFR since the first appeal.