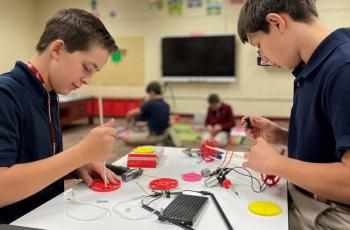 Yet another national assessment of America’s schools shows that Catholic schools are doing a better job than public schools of educating students in reading and math.

The 2022 National Assessment of Educational Progress shows that while average reading and math achievement among fourth- and eighth-graders nationwide has fallen, performance among Catholic school students in those grades and subjects was up.

“If U.S. Catholic schools were a state, their 1.6 million students would rank first in the nation” in those subjects and grades, wrote Kathleen Porter-Magee, superintendent of Partnership Schools, which runs 11 Catholic schools in New York City and Cleveland, in the Wall Street Journal.

“Catholic schools were a bright spot,” she wrote, “reflecting how these schools are making a difference in students’ lives.”

Diocese of Allentown schools were among those participating in the National Assessment, said Dr. Philip J. Fromuth, Superintendent of Catholic Education. The assessment shows average performance among Catholic schools nationwide, he said, but does not provide data on schools in individual dioceses.

Fromuth said efforts to keep diocesan Catholic schools open for in-person learning during the pandemic, at a time when many public schools remained closed, contributed to better reading and math performance among schools. He also cited the perseverance and determination of teachers, administrators, and staff as reasons for excellent learning conditions in Catholic schools in the diocese.

Another assessment, the Iowa Test of Basic Skills, shows that Allentown Diocese Catholic school students in grades 2 through 7 — for the second year in a row – did better than the national average. While national results continue to lag, the scores show that Diocese students achieved more than one year of growth during the 2021-22 school year in both reading and math.

There are 36 Catholic schools in the five-county Diocese. In addition to a quality academic curriculum, the schools provide service opportunities, safe and family environments, and a variety of programs that enhance the student experience.

Most importantly, Dr. Fromuth said, Diocesan Catholic schools teach Catholic beliefs and values that provide for the growth of students, both as scholars and as people of faith.