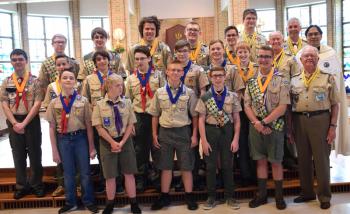 Diocesan scouts were honored for their efforts at the annual Diocesan Religious Emblems Award Ceremony May 19 at St. Mary, Kutztown.

Twenty youth and the Diocese of Allentown were recognized with medals and awards at the ceremony conducted by the Allentown Diocesan Catholic Committee on Scouting (ADCCOS).

The ceremony was coordinated by the Diocesan Office of Youth, Young Adult and Family Ministry (OYYAFM) and the Minsi Trails Catholic Committee on Scouting with Will Minford, program director.

Father Eric Tolentino, Diocesan scouting chaplain, presided at the ceremony that included benediction and exposition of the Blessed Sacrament.

Bernard Hofmann, who is retiring as lay chairman of ADCCOS, was especially thanked for his many years of service as committee chairman. Hofmann has been a member of the committee for more than 40 years and was appointed chairman by the late Bishop Thomas Welsh over 34 years ago. During his long tenure hundreds of boy and girl scouts have earned their Catholic religious emblems.

For his work on the committee Hofmann has received every award that could be granted by the Diocese, the committee and the National Catholic Committee on Scouting (NCCS): the Bishop’s Award, the St. George Award and the Rev. Joseph Campbell Award. In addition, Alvernia University, Reading has presented him with the Rabbi Alan Weitzman Award.

For his long and fruitful service Hofmann has received the Scouter Training Award, Scouting Service Award and the Silver Beaver Award from the council.

Hofmann and his wife Pat split their time between their homes in Reading and Calabash, North Carolina. They have five children, nine grandchildren and four great-grandchildren. They are parishioners of St. Joseph, Reading. He is president of the Boyertown Museum of Historic Vehicles.

Quality programs for youth are what the NCCS continually seeks, and is committed to supporting this goal. It is their hope that each Diocese will establish annual goals to accomplish key areas of quality program delivery. When a Diocese earns this award, it makes a statement that they have provided their youth members with the highest quality program experience possible.

The purpose of the Ad Altare Dei program is to equip the scout to take his place in the world as a maturing Catholic and a maturing American. The requirements concern themselves with action and knowledge. The scout is to have some understanding of what it means to be a follower and disciple of Christ. The scout is to live and apply the sacraments to his life because it is through them that a person can become a maturing disciple of Christ.

The following young people of Hawk Mountain Council were recipients of this award:

The following young people of Minsi Trails Council were recipients of this award:

The purpose of the Light of Christ program is to help the cub scout develop a personal relationship with Jesus. With the parents’ active assistance and participation in this program, it is hoped that the cub will come to see Jesus as a real person and friend.

The following young people of Hawk Mountain Council were recipients of this award:

The following young person of the Minsi Trail Council is recipient of this award:

The Pope Pius XII program was developed in recognition of the need for Catholic lay leaders in Church and community affairs. If young adults are formed in Christ, their formation will lead to a desire to serious commitment to action.

The emblem reflects the idea of growing concern with the world of God as well as the world of man. Guided by the Holy Spirit, this formation properly carried out will lead to transformed youth geared to their role as Christian leaders.

The following young people of Minsi Trails Council were recipients of this award: 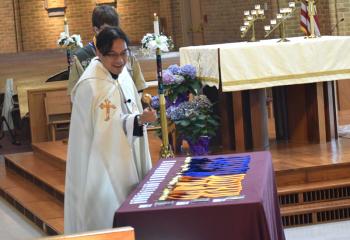 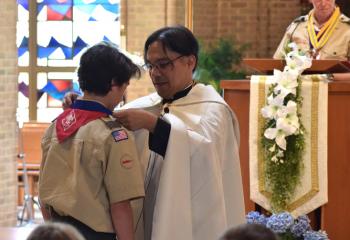 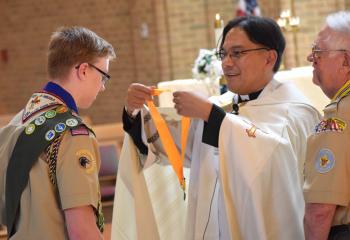 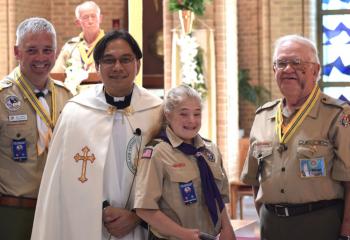 The Light of Christ award is given to Corrinne K. From left are Bill Krupka, Father Eric Tolentino and Bernard Hofmann. Fred Flemming is behind them at podium. 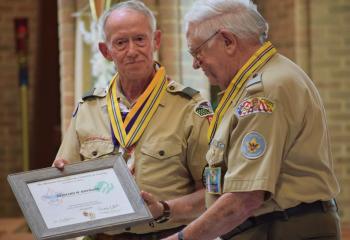 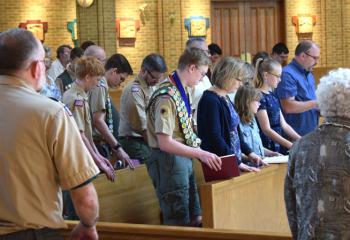