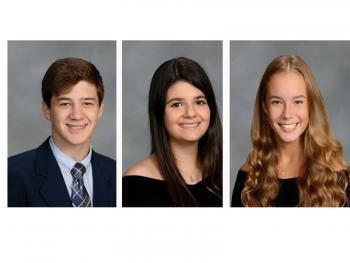 Dillon Murphy won first place with his essay, “Tragic Lessons from the Animal Kingdom – and An Ancient Kingdom on Losing Respect for Life.”

Murphy’s essay pointed out the similarities between humans and primates, noting “primates are known to kill their own offspring in the early months of life.”

“One might assume that such an act as infanticide, the killing of babies within one year of life, is hardly humane at all, and would never occur in a civilized society,” Murphy wrote.

“After all, humans, despite our similarities to primates, are far more intelligent and sophisticated than our mammal relatives right? Unfortunately, one’s insight and assumptions could not be further from the truth; millions of innocent babies worldwide have fallen victim to infanticide for a multitude of reasons, including gender selection and a parent’s inability to care for the child”

Jordan Toohey, who took second place, is the daughter of Michael and Debra Toohey and plans to attend the University of Scranton this fall. Her essay focused on euthanasia.

Elizabeth Leib, third place, is the daughter of Jeffrey and Victoria Leib and plans to attend Dickinson College, Carlisle, this fall. Her essay focused on infanticide.

Robert Gowell, chair of the theology department at Becahi, advised students on the essays. Students write the essays as one of the assignments in their senior year theology classes.

Read the winning essays in the LifeLines newsletter.  The essays are on page 8.