Because We Are Catholic: Work at Special Learning Center Inspires Conversion to Catholicism 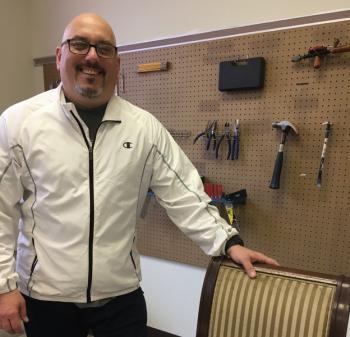 Bob Giba has had a varied career, including working with the homeless, with those recovering from addiction and with victims of domestic violence. He’s even spent some time away from social work as the person who puts the snacks in vending machines.

It was not until he arrived at St. Joseph Center for Special Learning, Pottsville four years ago, however, that he felt at home, “exactly where I needed to be.”

The work is rewarding on its own. But Giba has gotten an added bonus: over the past several years, his work in the center’s faith-based environment renewed his own personal faith and his own relationship with God.

“Working here was definitely God’s plan for me,” Giba says. “It has stirred a part of my soul that I was not aware was there, and I’m happy to say that I was inspired to convert to Catholicism.”

So at the Easter Vigil on the evening before Easter Sunday, Giba was baptized into the Catholic faith,  he was confirmed, and received the body and blood of Jesus Christ for the first time.  He said he couldn't be happier.

“Because We Are Catholic” tells the stories of how the people of the Diocese of Allentown make a difference in the lives of others, bringing the Light of Christ to each other and to our community.