Because We Are Catholic: Priest Answers Call to Serve in Military 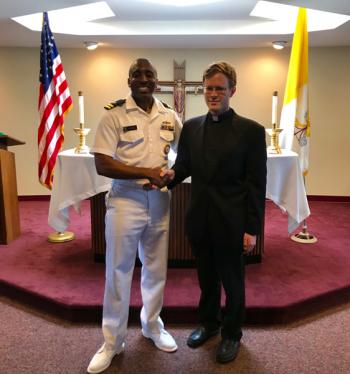 After five years as a priest in the Diocese of Allentown, Father James Harper was sworn in Friday to the U.S. military, where he will provide spiritual guidance to service members in the Navy, Marines and Coast Guard.

“The need for priests in the military is serious,” he said. “There are only 45 active duty priests to serve the whole Navy, Marine Corps and Coast Guard.”  He said about 25 percent of service people are Catholic, but only 6 percent of military chaplains are Catholic priests.

When he was in high school at Reading Central Catholic, the now 32-year-old Fleetwood native had only two career paths in mind: military officer or priest. Having achieved the latter, his new assignment will combine it with the former, as a lieutenant junior grade in the U.S. Navy.

Bishop Schlert granted permission for the assignment despite the need for priests in the Diocese of Allentown. “We cannot be indifferent to the needs of the broader Church, especially as it pertains to our men and women who selflessly serve in the military,” said Bishop Schlert. “Their distance from home, and proximity to danger and armed conflict, make it necessary that they have access to good priests.

“We are very proud of Father Harper for answering this call, as have other priests of the Diocese of Allentown. God will bless us with vocations to the Priesthood when we are generous in serving the greater needs of the universal Church.”

Father Harper will be “on loan” to the military, but will remain a priest of the Diocese of Allentown and will return to ministry here after his Navy duty ends. He recently attended a weeklong retreat for potential military chaplains in Washington, D.C., which included Mass in the Pentagon chapel, constructed in the portion of the building damaged in the 9/11 attack.

On completion of his initial training, a likely first assignment could be either with the Marines, or on an aircraft carrier.

During his time in the Diocese of Allentown, Father Harper has served as Parochial Vicar at Notre Dame Parish, Bethlehem, and St. Thomas More Parish, Allentown. This summer, while he awaits the call to report to duty, he is in residence at his home parish, Holy Guardian Angels in Reading, helping with Mass and other duties.

“Because We Are Catholic” tells the stories of how the people of the Diocese of Allentown make a difference in the lives of others, bringing the Light of Christ to each other and to our community. 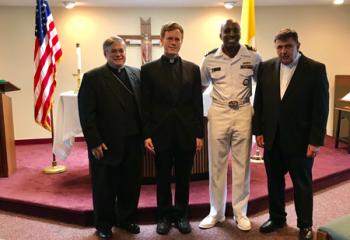 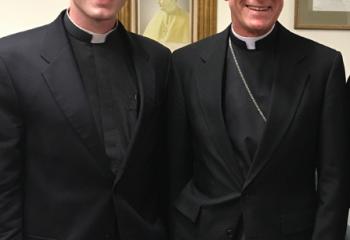 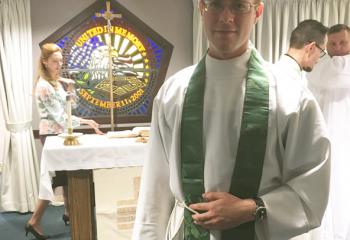 Father James Harper following Mass in the Pentagon chapel, which was built on the site of the damage caused to the building in the 9/11 attack.